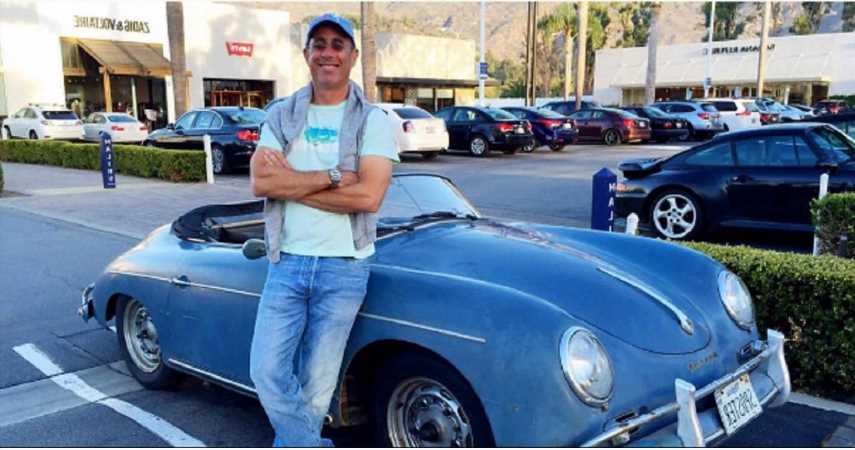 For celebrities, the whole world is their oyster. They can get whatever they want because being in the entertainment industry pays a lot of cash. The bigger the celebrity, the more fans they have which would mean more money for them. These celebrities spend their fortune on the things they enjoy and most of them accumulate rare collectible items, such as art or expensive figurines. One such celeb with a costly hobby is Jerry Seinfeld. Rumored to have over 150 cars in his private garage, with an estimated worth of somewhere between $50 to $150 million, he holds some of the most expensive cars known to man.

RELATED: The Big Daddy Garage: A Look Inside Most Expensive Cars In Adam Sandler’s Collection

Simple. Understated. Classy. These are just some words to describe the 1957 Fiat 500 which is valued between $13,000 and $40,000, and it is one that Jerry Seinfeld is very fond of. And who could blame him? Even with a garage full of flashier sports cars, the Fiat can hold out on its own in terms of personality. The simple design makes it very easy to maintain and only further highlights the car’s capabilities. With a top speed of only 53 mph, it was made for drivers who aren’t technologically inclined.

The 1953 Porsche 550-03 is a vintage race car and it valued between $60,000 to over $100,000. The one that Jerry Seinfeld owns was featured at the Porsche Rennsport Reunion vintage race, an automotive event, and the world’s largest meeting of classic Porsche racing cars. After extensive repairs to his prototype, Jerry also displayed it at the Quail Lodge in California. This is also the same car raced in the Mazda Raceway Laguna Seca. Given that most of his collection includes Porsche cars, it makes sense that Jerry owns one of these sweet rides.

The next one on this list is the 2017 Acura NSX which is now valued over $200,000. In the season nine finale of Jerry Seinfeld’s show, Comedians in Cars Getting Coffee, he featured this car while driving around with his guests. The car features a twin-turbo 3.5-liter V6 combined with three electric motors, making it a powerful vehicle with over 573 horsepower and 476 lb.-ft of torque. It also has a maximum speed of 307 km/h and offers options like carbon-ceramic brakes and exclusive wheels. It was also said that Jerry Seinfeld ordered this car with over $40,000 worth of extras.

The 1989 Porsche 911 Carrera Speedster is inspired by the 991 Speedster concept from 1985 and it is now valued between $250,000 to $325,000. It was launched in 1989 and instantly became one of Porsche’s most iconic cars ever made – right after the 356 Speedster. It’s equipped with a 3.2-liter air-cooled flat-six engine, which gives the race car approximately 231 horsepower and 195 lb./ft of torque. Despite the demand, Porsche only made over 2,000 cars of this model, making Jerry Seinfeld one of the lucky ones to own such a rare beauty.

The 1964 model for the Porsche 911 was its very first production model year and it is now valued over $400,000. While that’s already impressive, the one Jerry Seinfeld owns has a great history. His particular model was created specifically for Ferry Porsche, son of the German luxury automobile manufacturer’s founder. After buying his 1964 Porsche 911, Jerry restored it in Germany and ensured it was completed with its original parts. As a result, the car has a rear-wheel drive with a 2-liter engine, which powers a 5-speed manual set of gears.

Jerry Seinfeld’s 1986 Porsche 959 is probably one of the rarest cars in his collection and it is valued over $700,000. Only 340-something Porsche 959 cars were built at the time of production. It has a maximum speed of 211 mph, and when it was made, it was considered one of the fastest street cars that were legal to drive. Porsche manufactured this using aluminum and other lightweight materials, ensuring it would always be fast. With such a particular car, no wonder it’s one of Jerry’s favorites.

The lead character on the show Seinfeld has 1949 Porsche 356/2 is one of the most expensive cars in his garage as it is valued over $700,000. It’s also known as the Gmünd because it’s one of the last cars manufactured by Porsche in Gmünd, Austria. Out of the 52 cars produced between 1949 and 1950, Jerry owns the 40th one. The car is hand-built and shaped with hammers, made entirely of aluminum, and powered by a 40-horsepower air-cooled engine with two carburetors. The exterior coupe design holds much of Porsche’s signature style, making this one quirky car to have.

The 1994 Porsche 911 Turbo S is a scarce model and is valued between $1 million to $1.3 million, with some reports saying that Porsche sent only 39 units to the American market. This aero-enhanced car boasts a 3.6-liter engine with a maximum speed of up to 175 mph. It also has a 0-60 time of only 4.7. seconds, making it one powerhouse of a vintage car. Jerry’s car only had an approximate 12,700 mileage, with a beautiful metallic finish, before getting auctioned off in 2016.

The American stand-up comedian allegedly keeps this vintage race care in pristine condition and is valued between $1.1 million to $1.4 million, as it was reported to have the original paint job still and boasts low mileage. This particular model of Porsche is also often touted as the ultimate development of the 356-model series. It has a well-developed 2.0-liter engine and a lightweight aluminum body, which makes it perfect for racing or exhibitions. It also had bespoke disc brakes, 155 horsepower, and a Type 587/2 engine model, sourced directly by Porsche restoration facility RacelineFeustel in Switzerland.

The 1955 Porsche 550 RS is the most expensive car that Jerry Seinfeld has in his million-dollar garage as it costs $3 million. The Porsche 550 was Porsche’s first ever purpose-built race car. Its success on the track earned the nickname the giant killer. It dominated more oversized, powerful vehicles backed by Ferrari, Aston Martin, and Maserati. It also only produced 90 units, making the 1955 Porsche 550 RS very rare and expensive. As such, it’s become one of collectors’ most coveted vintage cars worldwide.