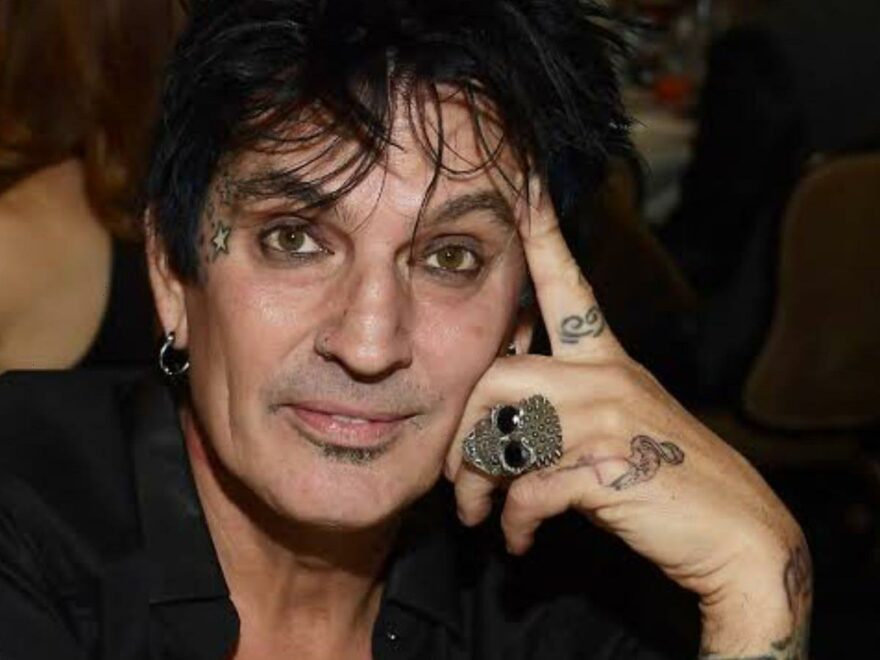 The Mötley Crüe drummer acquired the Calabasas property back in 2007 for $5.85 million, which means that even with a full-price sale the platinum-selling pop culture icon is looking at a loss of about $1.25 million, not counting real estate fees. The elaborately tattooed heavy metal musician, now 59, first tried to sell in 2016, with an asking price pushing up on six million bucks. Since then the property has been on and off the market almost a dozen times.

Set on over a quarter of an acre of hillside property in a gated enclave above the Calabasas Country Club, with an over-the-rooftops city-lights view, the nearly 10,000-square-foot house, with half a dozen bedrooms and eight bathrooms, stands two low-profile stories atop a partially subterranean four-car garage. The listing is held by Emil Hartoonian of The Agency.

A headbanger’s pastiche of styles, the home’s eclectic furnishings and finishes include elegant, polished chevron-pattern wood floors, rustic log beamed ceilings, a blood-red velvet sofa in the step-down formal living room, and myriad statues of Hindu deities. At the core of the house, a soaring, tropically planted triple-height atrium is topped by a retractable glass roof that showers the center of the house with natural light and air, according to Dirt.

Each corner of the dining room has a lighted display cabinet filled with curious curios and the forest green walls of the library/office are hung with a trove of industry accolades, including a plaque commemorating Mötley Crüe’s star on the Hollywood Walk of Fame. Huge and chockablock with high-quality designer appliances, the kitchen is arranged around a giant center island, while the nearby family room has a stone fireplace and glass sliders for easy-breezy access to the pool.

There’s a baby grand piano in Lee’s moody, monochromatically black and grey main-floor bedroom, perfect for early morning and late-night ticking of the ivories. The suite also includes direct access to the pool, a walk-in closet fitted for rock royalty, and a skylight-topped bathroom with similar finishes as the kitchen.

Spoking off the atrium on the lowest level are a wine tasting/dining room, a screening room with adjacent concession bar and, of course, a professional recording studio complete with isolation booths and a control room. Tiki torches ring the elevated backyard that offers expansive views across the valley and a circular spa that spills over into a uniquely shaped swimming pool.

While the veteran rocker, now 59, has wanted to sell the house off and on for six years, he may be more motivated now that he and his new wife, social media sensation turned actress Brittany Furlan — she was once the most followed female video star on Vine and was named in 2015 by Time as one of the most influential people on the internet — shelled out $4.15 million for a Japanese-inspired idyll in West L.A.’s ritzy Brentwood area last year.

Meanwhile, Lee’s two twenty-something-year-old model/actor sons, whom he shares with his larger-than-life ex-wife Pamela Anderson, have been making some real estate moves of their own: the brothers recently sold their shared home in Malibu for $3 million and splashed out $4 million for a half-acre spread in Encino.

“Set atop a spectacular hillside against the extended city light views lies this architectural compound which brings the perfect balance of a tropical escape and artistic functionality. A lush central atrium with natural tropic open to the sky with a retractable roof illumines natural light throughout. Uniquely modeled with the flow and scale far and wide. A spacious chef’s kitchen with center island, stainless steel appliances and granite counters. Entertainers living and dining room, a spacious office/library with a private terrace. The main level Master Suite with personalized tranquility, large scale glass doors slide open to the beautiful outdoor space with a private pool and spa overlooking the city views. A large walk-in closet generously scaled for ample space to both his and hers adjacent to a beautifully appointed master spa. The lower level offers a true compound made for imagination, creativity and inspiration. A professional recording studio skillfully engineered with isolation booths and a control room. Adjacent is a home screening room and personal concession bar as well as lower-level dining and wine tasting quarters. Lower level garage parking and ample storage. This magnificent compound is truly a unique offering for the creative lifestyle it demands,” according to the official description of the house courtesy of agent Emil Hartoonian of The Agency.