It’s not the first time a news reporter has inadvertently said the C-word by mistake when referring to the now-Chancellor of the Exchequer, with a Sky News host doing the exact same thing just this summer.

Last night, Mr Peston was speaking about the latest tumultuous events unfolding in Parliament when his blunder occurred, which was immediately picked up on by viewers watching at home.

Addressing Mr Hunt’s planned cuts to public spending, he said: ‘That means the hole in the public finances is bigger than it would have been, and Jeremy C***’s – Hunt’s – cuts will be more painful.’

A slight wry smile appeared to dawn on Mr Peston’s face as he continued speaking, failing to address the gaffe other than to correct it immediately.

Several people questioned the logic that went behind including the line ‘Jeremy Hunt’s cuts’ in the script, given how easily the politician’s surname rhymes with the C-word. 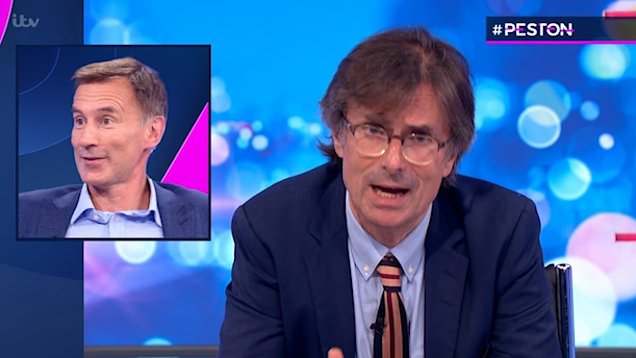 One Twitter user remarked that ‘one of the benefits of having Jeremy Hunt back in frontline politics is knowing someone will make the inevitable Jeremy C*nt slip-up’, adding that it’s ‘glorious, every time’.

‘Did he really say “Jeremy Hunt’s cuts”? Very risky phrase to use on live TV,’ someone else said.

‘I mean, if you’re really going to try and say ‘Jeremy Hunt’s cuts’ on live TV…’ another person commented over the word twister.

Elsewhere on ITV News, journalist Tom Bradby received an outpouring of praise for his introduction for the 10 o’clock news programme, where he said that it had been a ‘night of astonishing scenes at Westminster’.

The presenter acknowledged ‘reports of jostling, manhandling, bullying and shouting outside the Parliamentary lobbies in a supposed vote of confidence in the government’, before addressing resignations… and un-resignations.

‘The Deputy Chief Whip was reported to have left the scene saying, “I’m absolutely effing furious, I just don’t effing care anymore,” before he resigned, along with the Chief Whip. But, we’ve just been told they have now officially un-resigned. The Home Secretary has, however, definitely gone. In short, it is total, absolute, abject chaos,’ he said.

Mr Bradby was described as a ‘legend’ by viewers, while one person said: ‘This has got to be the best opening to News At Ten ever!’