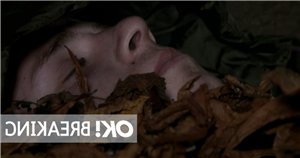 Emmerdale has hinted that another villager could be dead during Friday's episode as Samson Dingle was seen lifeless in a ditch after the ITV soap's deadly storm week.

Earlier this week, fans were left devastated on Monday night as Harriet Finch died after she was caught in a deadly storm explosion with Kim Tate.

While viewers were left sobbing on Wednesday night as Liv Flaherty died after being crushed by a caravan during the terrifying storm.

And during Friday's episode, the Dingles, who had realised Samson was missing on Thursday, decided to start searching for the teenager after realising he hadn't returned home or arrived at his friend's house in two days.

After calling the police, Lydia Dingle went out to look for Samson as she remembered he always took a dangerous shortcut and thought he might have used it.

And things took a dramatic turn when the Dingles found Samson's mobile smashed and abandoned on the floor, hinting at grave danger for the missing character.

Panicking about where he might be, Lydia shouted out for him before continuing to search the surrounding area.

And viewers were left worrying for Samson as the episode ended with the teenager lifeless and covered in leaves inside a deep ditch in the woods.

Viewers were quick to react to the scenes as one person tweeted: "Samson could be dead #Emmerdale."

A different account put: "Omg, I wonder if Samson is dead? #emmerdale."

Another follower wrote: "Is Samson dead or alive?!#Emmerdale."

For all the latest cast updates and juicy Emmerdale spoilers, sign up to our daily OK! Newsletter . Emmerdale continues weekdays at 7:30pm on ITV.