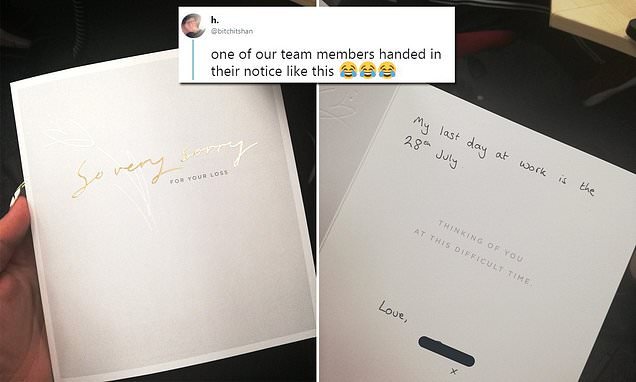 ‘So very sorry for your loss’: Twitter applauds cheeky employee who handed their boss a CONDOLENCE CARD when they gave notice

A condolence card has gone viral online after an employee revealed a member of their team used it when they handed in their notice.

Twitter user @b***hitshan shared on Thursday how one member from her work team decided to take a creative approach to handing in their notice, and it involved a condolence card.

‘One of our team members handed in their notice like this,’ the woman posted and included pictures of the hilarious card.

Incredible: A Twitter thread went viral after one woman shared a condolence card 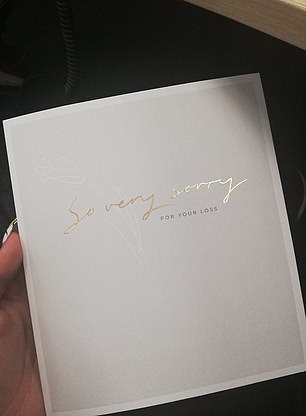 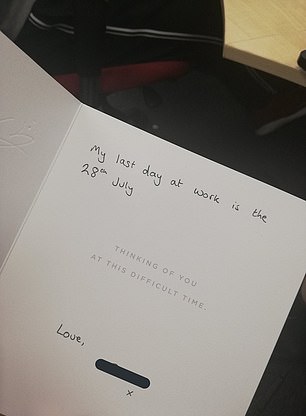 Clever: She revealed how an employee at her work handed it in as notice to the manager

Hilarious: The employee further revealed how the card was handed to their manager in front of everyone else in the workplace

Can’t get enough: People online loved the innovative way to hand in one’s notice to an employer

The front of the card featured gold writing, and it read: ‘So very sorry for your loss.’

Then the inside of the card included a handwritten note stating the employee’s last day would be July 28.

Below the note about the employee’s last day was also and inscription that read, ‘Thinking of you in this difficult time.’

After the tweet took off, the woman later revealed how all the employees were around when the card was handed off to the manager.

She wrote: ‘No really we all just stood and laughed when it was presented to our manager.’

People online couldn’t get over the abrupt and hilarious way the employee handed in their notice.

‘I love their work, I honestly have no choice but to stan,’ one person responded to the tweet.

Another Twitter user wrote: ‘How we are dealing with toxic work environments in 2019.’

Not only did the thread inspire people with an innovative way to hand in one’s notice, but it also revealed the many other creative ways employees quit their work.

One person revealed how they knew someone who used the same exact condolence card when handing in their notice at work.

The person wrote,’ I know someone who did the exact same thing, exact same card.’

Two other Twitter users discovered they used the same exact condolence card when handing in their notice, which let people know the idea was more popular than some originally thought. 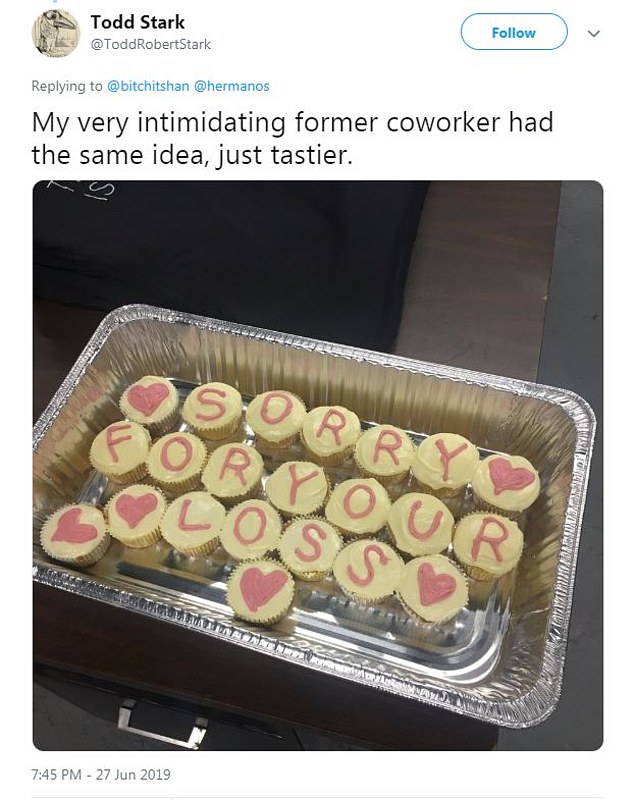 Tasty: An employee thought making cupcakes was the best, and most delicious, way to inform their employer they were done 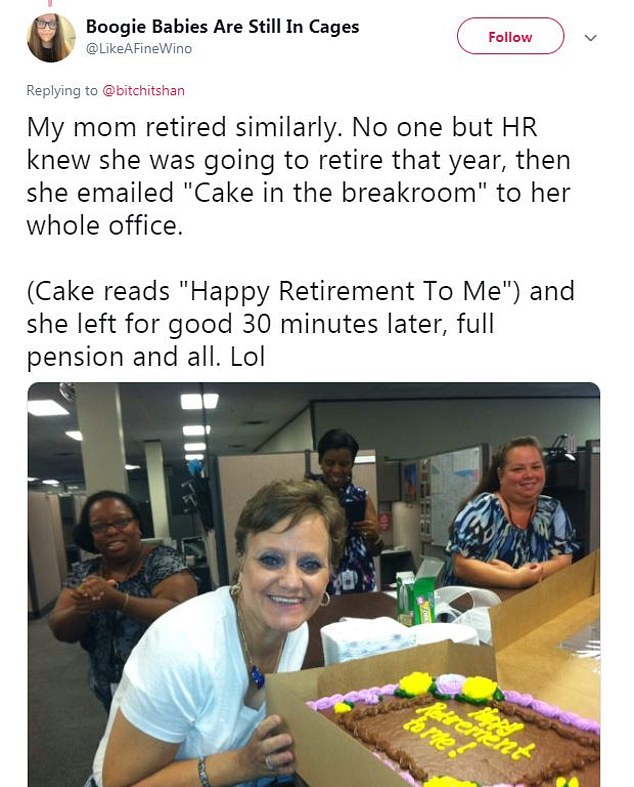 All the shade: One woman revealed how her mom decided to announce her retirement

Another user decided to hand in this notice by drawing a dinosaur.

Their note hilariously read, ‘This is a drawing of a dinosaur. It is also my 2 weeks notice.’

Someone else decided to inform their colleagues and employer they were leaving by making cupcakes.

The cupcakes each had an individual letter frosted across the top, stating: ‘Sorry for your loss.’

The viral Twitter thread, which was shared more than 50,000 times, has potentially inspired employees on how they should quit in the future.