People found guilty of “intentionally and recklessly” breaching public health orders would face two years in jail or a $90,000 fine, under new pandemic laws proposed by the Andrews government.

On Tuesday morning the government tabled its Public Health and Wellbeing Amendment (Pandemic Management) Bill 2021, which would curtail the chief health officer’s powers, giving the premier the authority to declare a pandemic and the health minister the role of making public health orders. 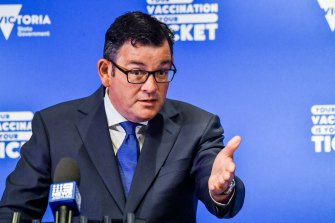 Premier Daniel Andrews said the legislation had transparency at its heart. Credit:Joe Armao

Health Minister Martin Foley said transparent decision-making was at the heart of the new legislation, while the Opposition decried it as an “incredible attack on democracy”.

An independent committee would scrutinise key decisions, and advice would be made public after health orders have been declared. If a person failed to comply with a health order and knew – or ought to have known – it would lead to a “serious risk” to the health of others, they would face a jail sentence of two years or a $90,000 fine, while businesses could be fined $455,000.

“In many ways, in terms of scrutiny, oversight, transparency, they are the right set of arrangements. There’s been widespread consultation with experts in many different fields,” Premier Daniel Andrews said on Tuesday morning.

“It’s important that we learn from the experience, and that we have the best set of arrangements in place for this next phase [of] living with COVID, and for the normalisation of this virus.

“We need specific [pandemic] laws … that will protect us and keep us safe. That was our commitment, and that’s what we have delivered.”

The Andrews government needs the votes of three independent MPs in the Legislative Council to pass legislation. It has already secured the votes of Fiona Patten, Andy Meddick and Samantha Ratnam, all but guaranteeing the safe passage of the bill.

Earlier this month, Mr Guy said public health orders should be “ticked off by a minister or the Premier”. On Tuesday morning, he said those decisions should be made with oversight.

“That part of the discussion is but what 1 per cent of the government’s proposal. No one talked about imposing the ability of the Premier to shut down a protest or individuals on the basis of their characteristics,” Mr Guy said.

“No one ever talked about the Premier having such extensive powers as proposed by this bill … behind [this bill] the government have thrown a whole lot of other measures, which are completely and utterly draconian.”

The legislation will be debated in the lower house this week and is expected to pass.