After swimming more than 2000 kilometres – from a river estuary in western Victoria to the Coral Sea off northern Queensland – it’s likely the female eel known only as “179353” met her end in the vast, warm belly of a whale.

How do we know? For three months before this Australasian short-finned eel disappeared, Victorian scientists had been tracking her long journey up the east coast to find the mysterious location where these eels go to spawn.

Using 40 gram satellite transmitters attached to their dorsal fins, scientists tracked 16 eels, including 179353, to pinpoint their location, temperature and depth, and follow their route. It’s the first time, worldwide, that any eel migration has been tracked from freshwater rivers to their spawning location. But suddenly, they lost track of 179353.

Luckily, a beachcomber on Lizard Island, about 1620 kilometres northwest of Brisbane, found her satellite tag with a broken antenna and posted it back to the scientists, allowing them to access extra data from its memory.

“It showed the eel [179353] had probably been eaten by a whale or a shark,” says Wayne Koster, a senior scientist at the Arthur Rylah Institute, part of the Victorian Department of Environment, Water, Land and Planning.

“All of a sudden it shot up to 37 degrees and stayed there for a couple of days. That’s the internal temperature of a mammal like a whale”. 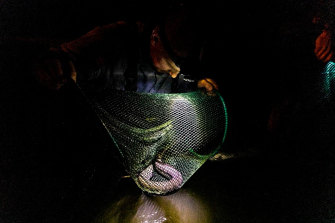 Eel populations have declined dramatically over the past 50 years in many regions of the world and short-finned eels are now considered “near threatened” by the International Union for the Conservation of Nature.

A critical part of their life cycle is the mysterious migration from freshwater waterways to distant oceans for a single spawning (when eggs and sperm are released into water). This spawning has never been recorded. 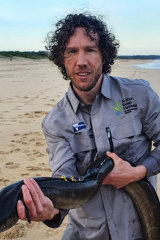 Wayne Koster has been working on the eel tracking project since 2019. Credit:Arthur Rylah Institute

Mr Koster and a team of experts have published new research on uncovering the migration pathway of the short-finned eel in the journal, Scientific Reports. This species is found in waterways from western Victoria to southern Queensland.

Mr Koster and his colleagues released the 16 female eels (which are larger than the males and better suited to carrying tags) into the Fitzroy and Hopkins rivers, and tracked two of them about 2500 kilometres into warm tropical waters in the regions around New Caledonia. The other tags were shed much earlier.

Once eels enter the ocean they don’t feed, relying on stored fat reserves to fuel them for the four-month journey. 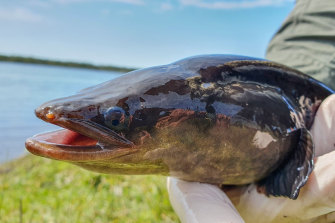 The tracking showed the eels swim a kilometre underwater during the day and come back towards the surface at night, probably to avoid predators.

“One of the really interesting things was they don’t all go the same way,” says Koster. “About half of them headed directly east across Bass Strait and then north, but some went south around Tasmania. It’s a much longer journey but gets them into deep water off the continental shelf much quicker.”

Previously, the only clues to the spawning location were small amounts of eel larvae picked up by trawlers in the south-western Pacific Ocean.

These young, called glass eels, drift on ocean currents for up to a year before swimming up rivers, where they may live for decades, feeding on small fish and crustaceans like yabbies.

Like lots of freshwater fish (yes, eels are fish) are diadromous – they migrate between fresh and saltwater to take advantage of different resources at different life stages.

The short-finned eels are usually olive brown, but when they migrate down the river to breed they undergo an incredible metamorphosis into “silver eels”, with a pale belly and dark back that helps them camouflage. Their eyes also darken and enlarge to see in the ocean depths

Eels have a particular cultural significance to First Nations people. 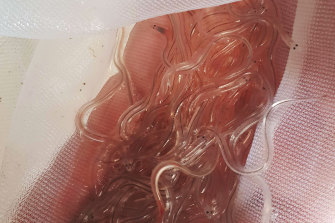 “Kooyang are a very hardy fish, they could be smoked and traded over large distances,” says Rose. “They’re still relatively plentiful, but we recognise eel stocks around the world are under pressure from overfishing and pollution and we want to keep an eye on the health of our eels.”

The Budj Bim landscape was recently inscribed on the World Heritage list as one of the world’s most extensive and oldest aquaculture systems.

The eels’ long migration journey exposes them to predators. Most of the satellite tags came off early, which indicates a high level of predation, probably by sharks or whales.

This highlights the need to maximise the number of eels that begin the long journey, says Mr Koster. This includes removing physical barriers, installing fish ladders and ensuring sufficient river flows to cue the eels for migration.