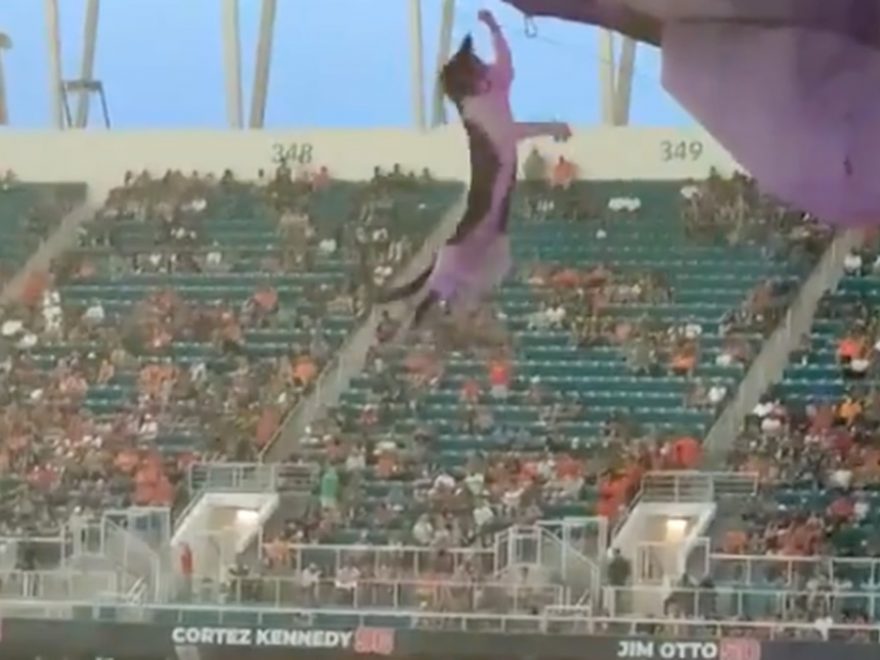 This cat probably has eight lives remaining after this crazy ordeal.

Footage of a feline clinging for dear life at a college football match in America has gone viral, with the video registering 2.6 million views in three hours.

During an NCAA Division game between the Miami Hurricanes and Appalachian State Mountaineers at Hard Rock Stadium, spectators were left in shock when they spotted a cat dangling from the stadium’s upper deck.

“They were trying to grab it from above and they couldn’t reach it but they were scaring it downward,” Craig Cromer, a facilities manager at the University of Miami, told ESPN.

“It hung there for a little while with its two front paws, then one paw, then I was like, ‘Oh my goodness, it’s coming soon.'”

A group of fans quickly unravelled an American flag underneath the animal, which was generating louder cheers than any of the action of the field.

Finally, the heart-stopping moment came when the petrified cat lost its grip and fell about 20 metres towards the screaming crowd below.

But the feline managed to land on the American flag, and a spectator triumphantly lifted the cat, which showed no sign of injury, prompting a wild reaction from the Miami crowd.

The hashtag #HardRockCat was trending on Twitter soon after.

Not that anyone was paying attention, but the Hurricanes ultimately secured a thrilling 25-23 victory over the State Mountaineers.