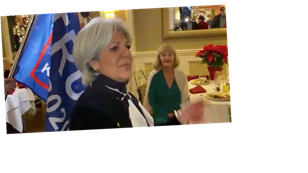 New York Governor Andrew Cuomo condemned a maskless holiday party attended by members of a local Republican group, including a candidate running for City Council, taking part in a conga line amid a worsening coronavirus pandemic.

A viral video shared by journalist Matt Binder showed partygoers from the Whitestone Republican Club dancing and singing to the Bee Gees’ “Should Be Dancing” as one man held a flag in support of President Trump. The footage showed dozens of other attendees not wearing masks and in close proximity of each other.

When asked about the party Tuesday, Cuomo reminded the public about taking precautions during the pandemic.

“I saw the video,” he said during a phone briefing with reporters. “COVID conga lines are not smart. That’s my official position. Why you would do an unmasked conga line in the middle of a COVID pandemic — whatever your political persuasion — defies logical explanation as far as I’m concerned.”

Vickie Paladino, one of the revelers seen leading the conga line, is running for office in New York City’s borough of Queens, a region that continues to suffer from the pandemic. Queens has more than 7,400 coronavirus deaths, ranking fourth among the hardest hit counties in coronavirus deaths in the U.S., according to Johns Hopkins’ latest data.

“Everyone there had a great time and we were pleased that we gave people that time to be together with others of like mind and spirit as we get ready to move forward into what will hopefully be a much better 2021,” he said.

The event, which wasn’t a campaign event for Paladino, according to Hornak, was held at Il Bacco Ristorante on December 9, days before Cuomo reinstated a ban on indoor dining.

Paladino gained local fame in 2017 after a viral encounter with New York City Mayor Bill de Blasio. The conservative, who has taken pictures with the likes of rising Republican star Matt Gaetz, is currently running to represent Council District 19 and pledges to supporting reopening businesses completely if elected.

CBS News sent requests for comment to Paladino’s campaign, the Whitestone Republican Club and Il Bacco Ristorante, but they were not immediately returned.

Members of both parties have shown to disobey coronavirus health protocols. However, some prominent Republicans, including the White House, have continued to hold holiday parties despite surging COVID cases across the country.