Fat Shark’s game entries into the fantasy world of Warhammer have been huge successes — now, with Vermintide 2 three years past, the team is returning with Warhammer 40,000: Darktide. Fans of the grimdark Warhammer 40K universe may already be salivating, but they’ll be even happier to hear that Gaunt’s Ghosts and Eisenhorn author Dan Abnett is working alongside Fat Shark to produce a game that feels true to the Warhammer 40K setting.

Vermintide and Vermintide 2 are beloved entries into the universe of fantasy Warhammer, focusing on Skaven and the forces of Chaos as they work in tandem to bring down the empire. This time, Fat Shark will be moving into the realm of grimdark with Warhammer 40K: Darktide.

Veterans of Vermintide will recognize some of the gameplay basics from the trailer videos — you and up to three other allies stand against massive hordes of evil. However, it appears as if basic gameplay is where many of the similarities end.

Warhammer 40K: Darktide will focus on the player’s reputation with the all-powerful Inquisition, which serves the Imperium of Man by rooting out Chaos and xenos influences. While players will still be engaging in the usual horde and survival-based missions, this time they have the option of choosing from guardsmen, zealots, and ogryn — based on what we’ve seen so far.

Naturally, the setting is vastly different. Warhammer 40K takes place in the 40th millennium, at which time humanity has spread across the stars in the form of a bloated, grim imperium that barely holds its own against the ever-growing powers of Chaos. To bring that universe to life, the game has brought Dan Abnett on board — but more on that later.

“We wanted to take that feeling of vulnerability and work it into the game. Make sure that you need to have these moments where other people in your party can take that center stage and make sure you’re working together as a unit,” explained Executive Producer Steven Bigras.

“You’ll have your moment in the sun, but you need each other to survive,” he added.

“To gain the trust of the Inquisition, you need to go on missions,” explained Bigras. “You do that in the hub by going to a mission board where you’re served a variety of options to prove your worth to the Inquisition.”

“If you survive, you make it back to the hub and continue this process, building more and more trust, which will unlock more things for you to do,” Bigras explained. 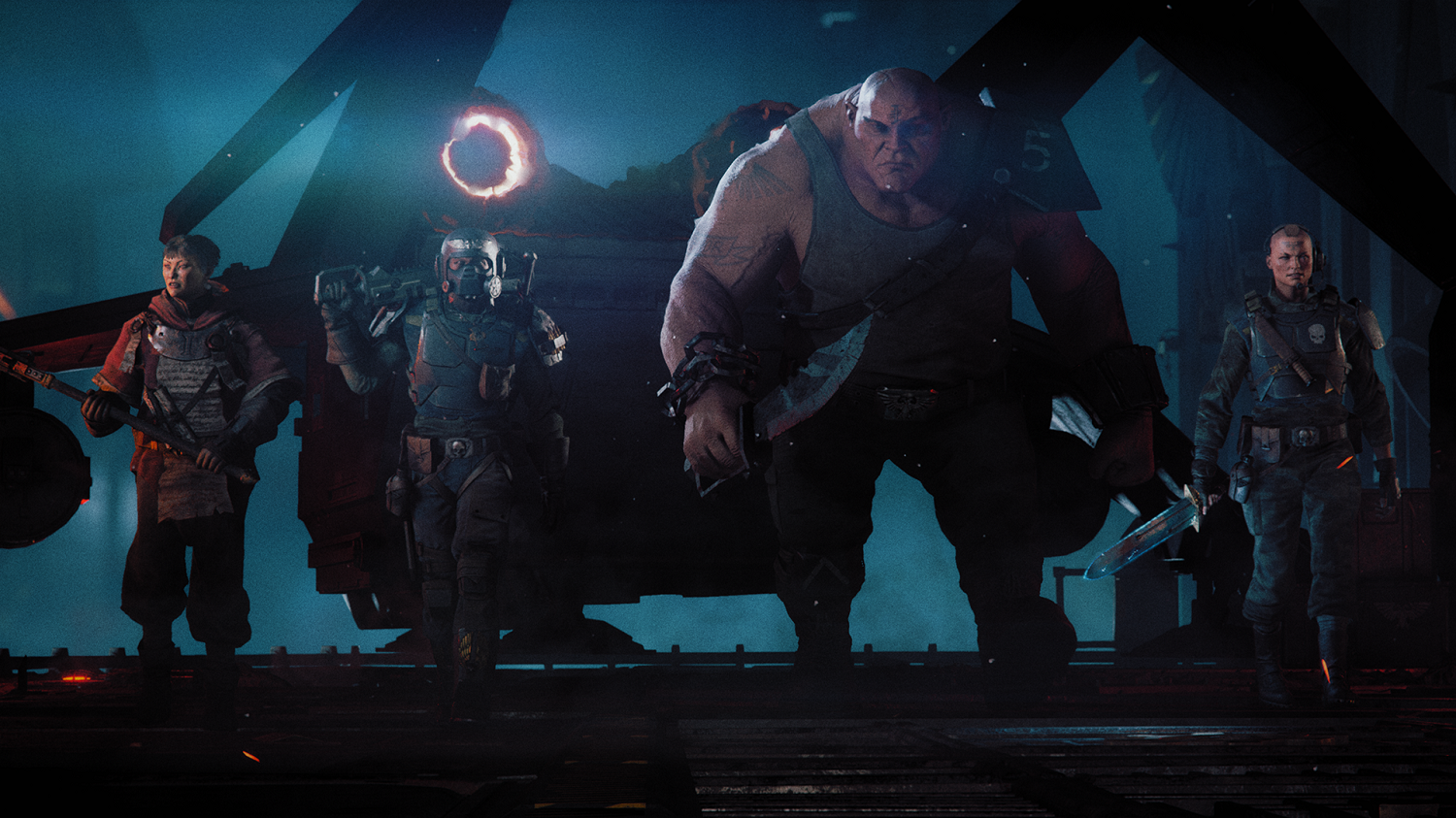 Warhammer 40K fans will be thrilled to learn that Dark Library author Dan Abnett is joining Fat Shark for Warhammer 40K: Darktide. Abnett is one of the Warhammer 40K universe’s most acclaimed authors, penning the Gaunt’s Ghosts series as well as the Eisenhorn series, among others.

For Abnett, it was important to focus on the humans of the Warhammer 40K universe, rather than the transhuman Space Marines or alien Eldar.

“With Darktide we chose to focus on humans because humans are actually the heart and soul of the entire 40K universe. And to play as a human being really emphasizes the vulnerability, the survival horror aspect of it,” explained Dan Abnett for the writer reveal trailer.

Warhammer 40K: Darktide will take place on an Industrial World named Atoma Prime, home to a continent-sized Hive City named Tertium. While a Chaos infestation may typically call for orbital bombardment or a cleansing campaign, Tertium is too valuable to risk damaging.

“The Hive City’s important to the Inquisition because it’s a vital imperial holding. It’s essentially the capital of an enormous area of space and, of course, it’s home to billions of loyal Imperial citizens,” Abnett said.

“So it’s not the sort of thing you want to lose, but it’s also a way for Chaos to get into the Imperium, which they can’t allow to happen.