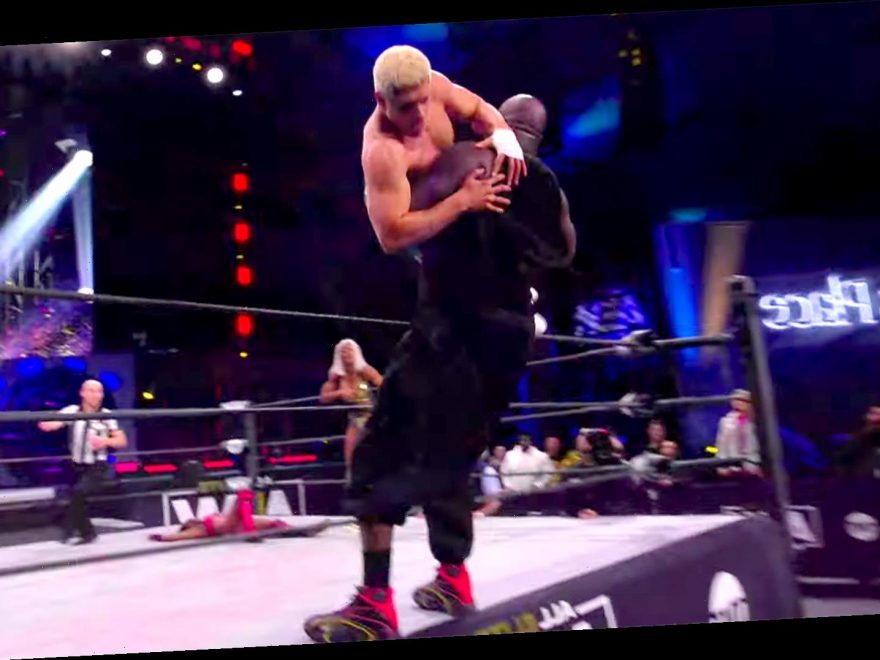 Cody Rhodes has a message for Shaquille O'Neal: Stick to the court!

The two squared off against each other in the ring on Wednesday night's AEW Dynamite, where O'Neal, 48, teamed up with Jade Cargill against Cody and his partner Red Velvet.

While Cody, 35, slammed the 7 ft., 1 inch Basketball Hall of Famer through not one but two folding tables, O'Neal delivered his own share of body slams to the professional wrestler.

O'Neal and Cargill, 28, ended up winning the match, but she had to secure the victory with a knockout to Red Velvet, as the retired NBA legend was still seemingly unconscious after the table incident. O'Neal spoke out about how he felt going into the match in an interview with the Associated Press, published Tuesday, in which he insisted, "I'm winning. Guaranteed."

The Jacksonville, Florida-based match was O'Neal's first AEW showdown — and as he told the AP, "I can never back down from a challenge."

"I'm not a professional wrestler, but I've been in a match before," said the athlete. "I've got a lot of moves in my arsenal. When you step inside somebody's world, you have to stick to what you're masterful at."

O'Neal continued, "I'm not acrobatic. I'm not going to be jumping off the ropes. I'm coming with the power game. When I get hands on him, I'm going to display this power." This isn't O'Neal's first go-around in the world of professional wrestling. He has made appearances for WCW, Impact and WWE over the years. An older clip even shows the athlete in a promo with Hulk Hogan in 1994.

But one of his most memorable moments came in 2016 when he appeared at the WWE's André the Giant Memorial Battle Royal at WrestleMania 32. It was there that he stared down the Big Show and gave a chokeslam to Kane.

Wednesday's match seemed like retaliation for a December incident involving Cody's wife, Brandi Rhodes. That month, O'Neal was interviewed alongside Brandi, who had her arm in a sling as a result of being attacked (in storyline) by Cargill a few weeks prior.

After O'Neal told Brandi she could get some pointers from her opponent while her arm healed, Brandi, 37, grabbed interviewer Tony Schiavone's glass of water and threw it in O'Neal's face — a hilarious moment that soon went viral on social media, with people saying it would become the basketball legend's "new meme."