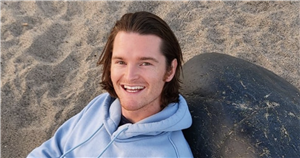 Ever since Married At First Sight has returned to our TV screens, viewers have been hooked on everything to do with the show. Daniel McKee is one the show’s two first openly gay contestants and has tied the knot with Matt Jameson.

Fans were left shocked at the age gap between the couple. Daniel is 27 but Matt is 12 years older than him. In the first episode, the narrator commented, ‘Two grooms are confronted with an age gap,’ as Matt questioned Daniel’s age. But it seems things are going swimmingly for the pair – even though they had to miss the first dinner party due to a Honeymoon delay.

Here’s everything you need to know about handsome Irishman Daniel…

How old is MAFS star Daniel?

Daniel is 27 years old and is from Northern Ireland.

What does MAFS star Daniel do as a job?

Away from the show, Daniel works in sales. He loves the great outdoors and is passionate about hiking, cold water swims and meditation. Daniel, who is a vegetarian has been described by the show’s producers as a ‘spiritual force to be reckoned with,’ with an ‘infectious personality’.

What else should you know about MAFS star Daniel?

Daniel, who is one of Married at First Sight UK’s first gay contestants, said: ‘Gay marriage has only been legalised very recently in Northern Ireland, which is absolutely shocking. And, now that I can share my relationship with the world, I find that so important."

Daniel describes himself as "very much a free spirit." He clearly loves living life to the full too and says that he likes "doing things that give me a sense of adrenaline and a spice for life – dancing in the rain, singing, or connecting with new people. I’m all about the good vibes and experiencing life it its fullest."

Daniel is very active on Instagram and has 4,480 followers. He clearly loves travel and adventure and has travelled to the likes of India, Zanzibar, Lithuania, and Taiwan.

He also seems to be a keen baker and recently whipped a delicious looking Victoria Sponge cake. Before joining Married At First Sight, he had been single for about a year and a half. He did admit that if there is one reason not to marry him is because ‘sometimes I love to be spontaneous.’ In a partner, he looks for someone who is ‘"fun [and] don’t take themselves too seriously."