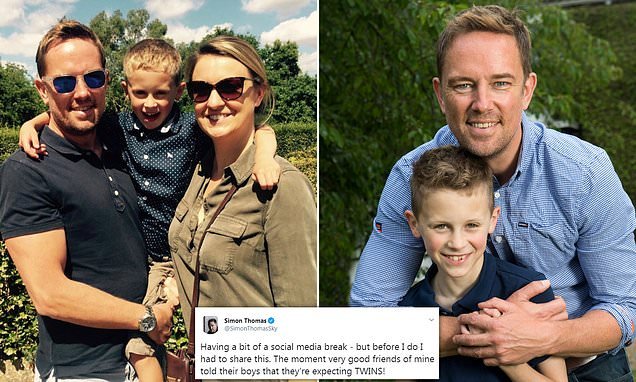 Former Sky Sports presenter Simon Thomas has deleted his Instagram after revealing last month he would be taking a break from social media.

His Twitter account is still online but it appears he is on his social media blackout, having not tweeted since a tribute to his friend.

Widowed Simon last took to social media back on June 18th, when he wrote on Twitter: ‘Having a bit of a social media break – but before I do I had to share this.

He then went on to post a video of his friends sons, who found out that their parents were expecting twins. 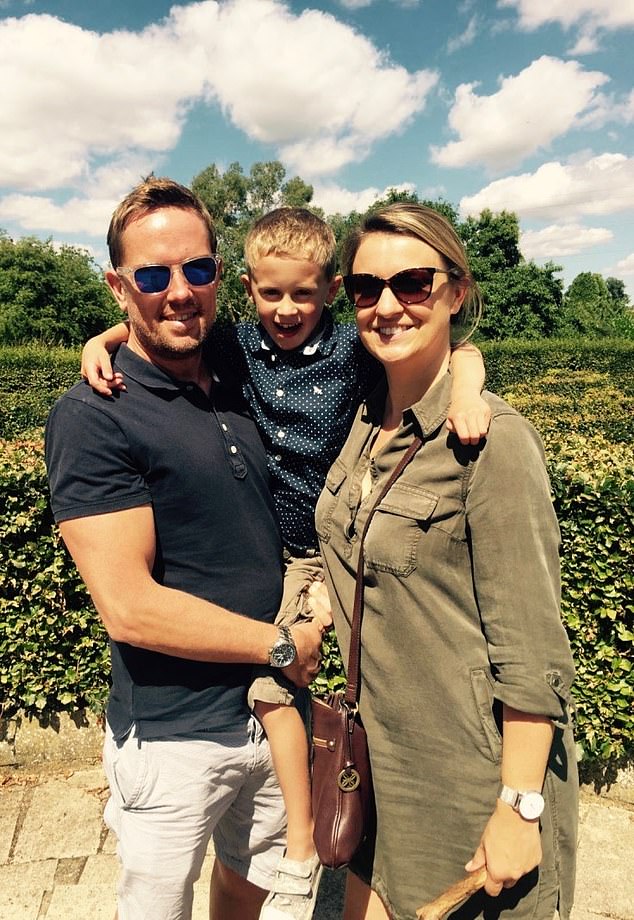 Simon has been raising his child Ben, nine, single-handedly after losing his wife Gemma (pictured with Ben and Simon) to cancer at the end of 2017

Former Sky Sports presenter Simon Thomas revealed he will turn off his social media in a heartwarming post in June, celebrating his friends having twins

He said in the post: ‘The moment very good friends of mine told their boys that they’re expecting TWINS!’

The clip showed Mr Richie’s two sons and wife at home in Ledbury, Herefordshire, with a picture of her ultrasound scan – as one of the boys realises there are two babies in the images.

Simon has been raising his son Ben, nine, single-handedly after losing his wife to cancer at the end of 2017.

Gemma tragically passed away in November 2017, a year after she was sent home for bed rest by her GP after visiting three times with flu-like symptoms. 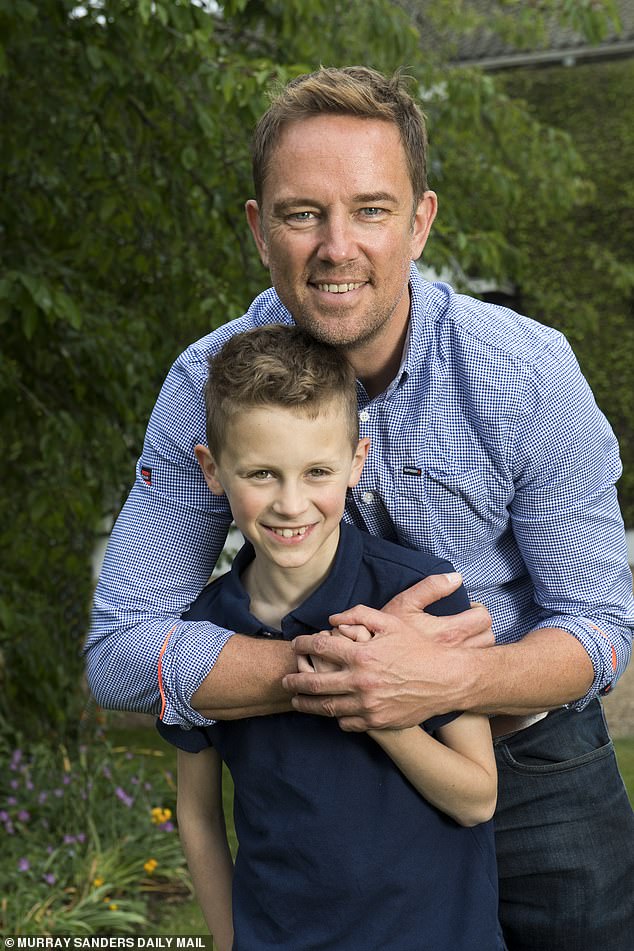 On mothers day this year the TV presenter shared a sweet tribute to his late wife, which included a picture of her with his son (pictured) 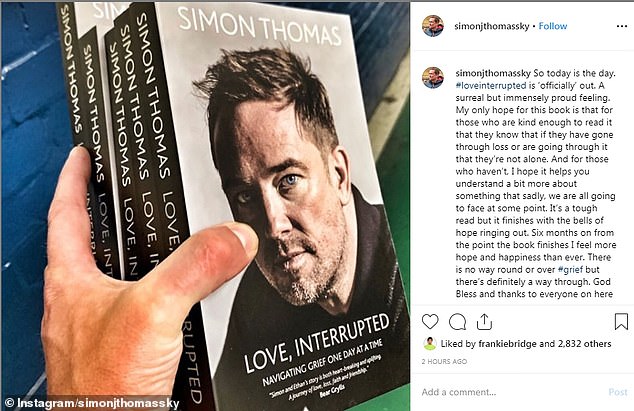 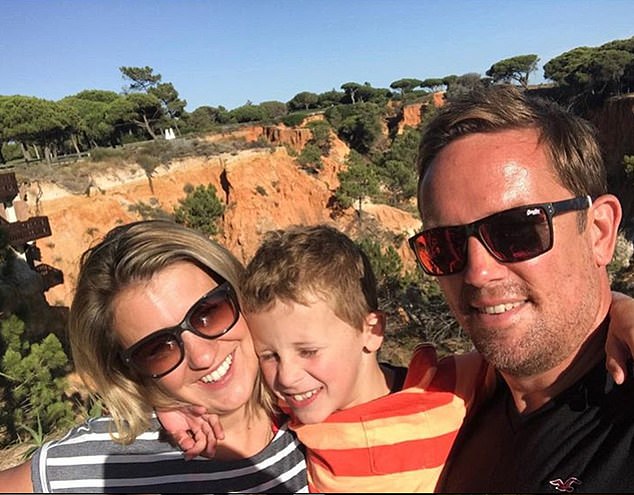 Gemma tragically passed away in November, a year after she was sent home for bed rest by her GP after visiting three times with flu-like symptoms

She died just four days after being diagnosed with acute myeloid leukaemia, aged 40.

On mothers day this year the TV presenter shared a sweet tribute to his late wife, which included a picture of her with his son and said: ‘We thought she’d always be there to guide you. To be right behind you as you grew, matured and began to spread your wings.

‘We thought the love and wisdom she poured into your life would never cease to flow. We took it for granted that those days wouldn’t end for a long, long time.

In mid-June, Mr Thomas opened up about his new book which he wrote in the hope of helping others ‘find a narrow path’ through grief.

He said the process writing the book about losing his wife had been cathartic. 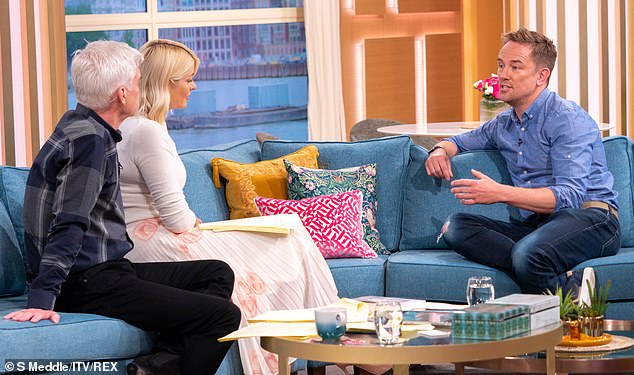 Simon Thomas, 46, discussed his new book ‘Love, Interrupted – Navigating Grief One Day At A Time’ on This Morning last month

He told This Morning: ‘I wanted to give hope to people going through this as ultimately we know we’re not alone but to hear it is massive,’ he told the presenters, while discussing new book ‘Love, Interrupted – Navigating Grief One Day At A Time.

‘I also wanted to give people an understanding that grief can be really mess. I had PTSD for months. I was angry, crying, every emotion out there I was experiencing and hundreds of thousands of others do as well.’

On the show, Simon revealed it was his son Ethan who first mentioned the idea of writing a book after seeing him jotting down notes in the early hours. 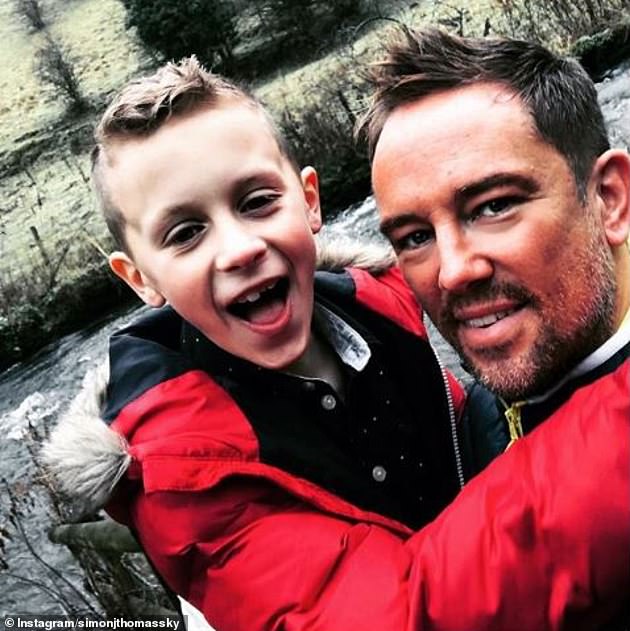 When Mr Thomas read through Gemma’s text messages following her death, he told the presenters he was surprised to discover she had mentioned some of the symptoms to friends – which he had no idea about 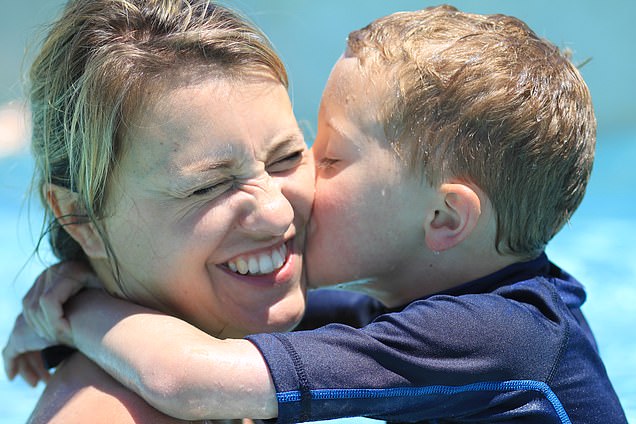 Gemma Thomas (pictured) died just three days after she was diagnosed with acute myeloid leukaemia — and only weeks after she became ill. Simon was given the prognosis that her condition was critical

‘About a week before the funeral I started writing down how I was feeling – particularly with Ethan as anytime he came up with an amazing question or expressed his feelings I wrote it down,’ he explained to presenters Holly Willoughby and Phillip Schofield.

‘He came downstairs one morning at 6.30am and I was just tapping away. He asked what I was doing. I told him I was just writing down how I’m feeling so maybe one day we can look back and see how far we’ve come. He said: “why don’t you write a book?”

When Mr Thomas read through Gemma’s text messages following her death, he told the presenters he was surprised to discover she had mentioned some of the symptoms to friends – which he had no idea about. 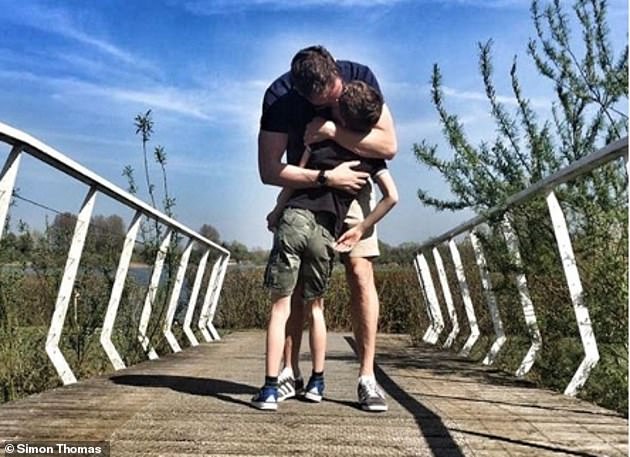 ‘I never knew she was complaining of mouth ulcers a month before she died,’ he explained. ‘That’s a symptom of blood cancer. The clues were there – the mouth ulcers, the bruise that wouldn’t go, the tiredness, the headaches.’

He added: ‘It was like Cluedo putting them all together. They were all there but we didn’t see them. Over half the single population can’t name a single symptom of blood cancer.’

Mr Thomas then went on to praise his son Ethan for helping him navigate the narrow path through grief.

‘There were two big moments where I was very close to ending it. You can’t see anymore. Life feels very, very grey. The colour is sucked out of life.’ 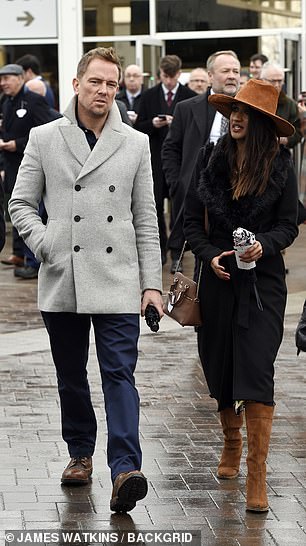 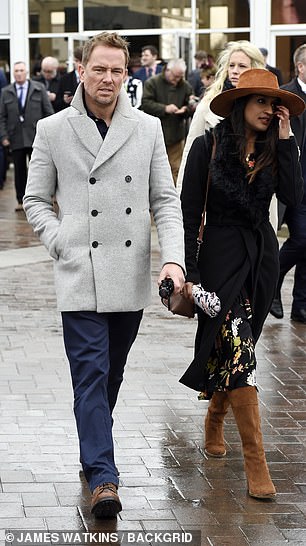 Simon Thomas walks with new girlfriend Derrina Jebb, 28, attending the Gold Cup day during day 3 of the 2019 Cheltenham festival. ‘An amazing woman who has stood shoulder to shoulder with me in some of my darkest hours and has become a rock not just for me, but for my boy, too,’ wrote Simon about Ms Jebb

‘I knew I simply couldn’t for him, for me or my friends that I couldn’t give up. He’s the one that’s pulled me through.’

In the acknowledgement for the book, Mr Thomas has also mentioned rumoured girlfriend Derrina Jebb.

He added: ‘My only hope for this book is that for those who are kind enough to read it that they know that if they have gone through loss or are going through it that they’re not alone.’

‘And for those who haven’t, I hope it helps you understand a bit more about something that sadly, we are all going to face at some point. It’s a tough read but it finishes with the bells of hope ringing out.’

‘Six months on from the point the book finishes I feel more hope and happiness than ever. There is no way round or over #grief but there’s definitely a way through. God Bless and thanks to everyone on here who has been so supportive.’