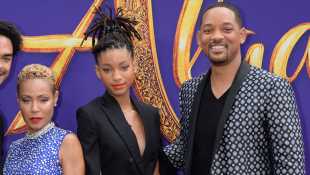 Willow Smith recently revealed that she can see herself dating both a woman and a man at the same time. And now, we know how her parents feel about it.

Willow Smith got super candid on the June 24 episode of her mom Jada Pinkett Smith‘s Facebook Watch talk show Red Table Talk. The progressive 18-year-old revealed that her ideal relationship would be a polyamorous “throuple” with a woman and a man — at the same time — because she loves both genders “equally”. Willow’s fans know she’s super open minded and they love that about her. But what about her parents? Well, according to a source close to Jada, 47, and Will Smith, 50, they feel the exact same way. In fact, the family friend told HollywoodLife EXCLUSIVELY that they’re not only supportive of their daughter, they’re also proud that she shared her controversial view with the world.

“Will and Jada are extremely proud of both their children and want nothing more than for them to live their life the way they want to live it,” says our source. “They were well aware that Willow felt this way about relationships, but are very proud that she shared her views with the world. It’s important for them all that people can hear these things so if anyone is struggling with the way the want to live their life maybe they can look to Willow as a role model.”

Not everyone in Willow’s family thinks her being a part of a throuple is a great idea, though. During the same episode of the Red Table Talk, Willow’s 65-year-old grandmother Adrienne Banfield Jones told her, “I would not be excited about that. It doesn’t sit well with me, I don’t understand this emotional commitment.” But Willow seemed un-phased by the differing opinion and even went so far as to state that monogamy Is “fear based” and that it “inhibits you from learning those skills of evolving past those feelings of insecurity.”

As progressive as Willow is, she’s also still very young — a fact her mom Jada reminded everyone of when she appeared on Jimmy Kimmel Live on June 5. During her chat with host Jimmy Kimmel she revealed that Willow’s curiosity about polyamory led her to do a show on the topic. “Here’s the thing, it’s a throuple that Willow was actually following on Instagram. That’s how it all came to be. She became very curious about this polyamory thing.” When Jimmy asked Jada if she thought Willow would follow through with a throuple, she said: “Yeah. Possibly. I don’t know. Listen, she’s eighteen. Who the heck knows what the heck is gonna go down?”