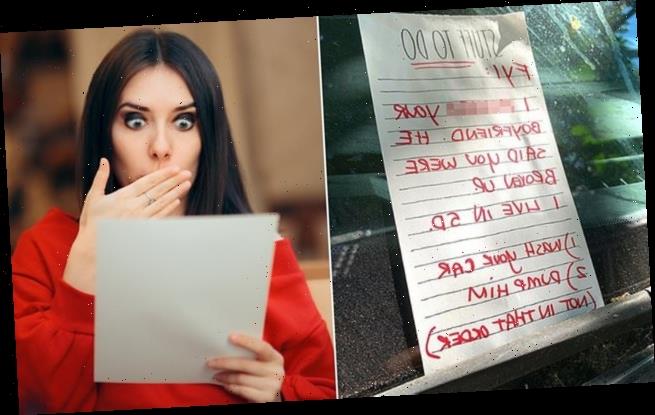 ‘He said you were broken up… Dump him.’ Woman receives a devastating note on her car from a neighbor who had sex with her boyfriend – after he ‘gave his girlfriend an STD’

An unidentified woman received a devastating note from her neighbor revealing that her boyfriend had cheated — and criticizing her for her dirty car.

The note was shard by the Instagram account Neighbors from Hell after it was left on the woman’s windshield. 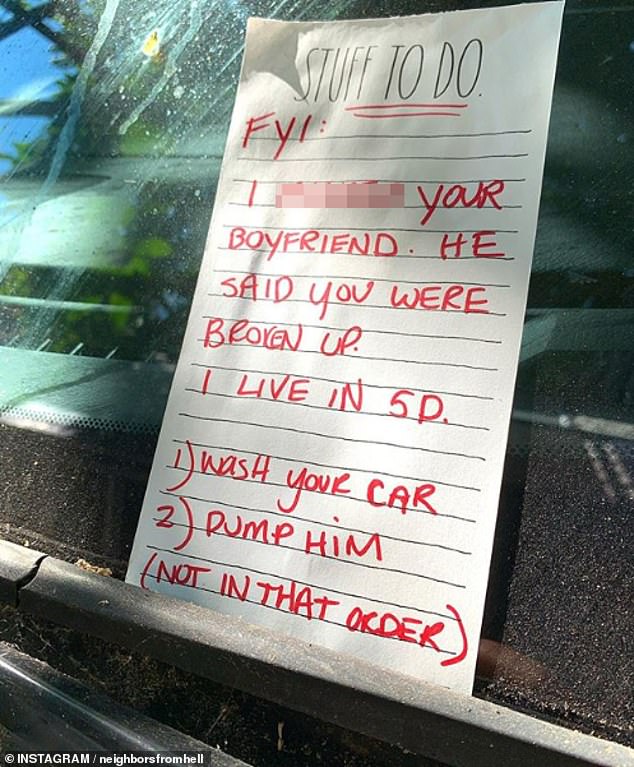 Too bad! An unidentified woman received a devastating note from her neighbor revealing that her boyfriend had cheated — and criticizing her for her dirty car

The semi-anonymous note was written on a piece of notebook paper with the words ‘Stuff To Do’ pre-printed at the top.

And, to add insult to injury, the woman who wrote the note decided to add a few ‘to do’s’ to her message at the bottom of the paper.

After the revelation about her boyfriend cheating — and lying about his relationship status — the note has two tasks for the unlucky-in-love woman.

Both bits of advice seem like good ones, particularly because the small amount of the car visible in the photo is incredibly filthy — though it does seem like an unnecessary bit of shaming on the part of the woman who left the note.

The Instagram post has amassed over 11,000 likes, with commenters praising the neighbor for telling the note’s recipient about her bad boyfriend.

‘Honestly this is the kinda neighbor I would like to have,’ wrote one.

‘If be happy to get this message in this way. Obviously I’d be heading over to 5D with a bottle,’ said another.

‘I’d appreciate the tip about the cheating boyfriend but mind your business about my car,’ said one more.

Later, the Instagram account that shared the note posted an unfortunate update: ‘Twist: Person who received this note tested positive for an STD. Leaver of note needs to get checked!’