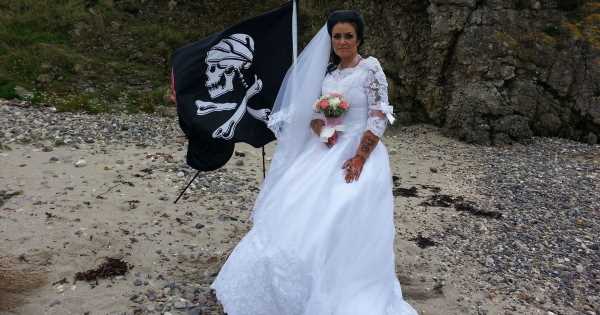 A woman who went on the telly to talk about how she wed a 300-year-old ghost pirate before splitting from him says she has been the victim of online trolls.

Amanda Teague appeared on ITV's This Morning to talk about her bizarre marriage to a dead Haitian buccaneer called Jack.

The 47-year-old shared how she had to end things by exorcism with her ghostly hubby because the relationship was too intense and began to affect her health.

But Amanda of Downpatrick, near Belfast, Northern Ireland then received an onslaught of online abuse after appearing on the sofa opposite Eamonn Holmes and Ruth Langsford.

One sick troll told her: "You masquerade as a caring animal lover, but in reality you are a sick, bitter, headcase.

Another asked: "Why hasn't this woman been sectioned?"

Another said of her husband: "He probably had the fright of his afterlife when he seen (sic) her in that wig".

The most malicious comments included mention of the death of Amanda's son Thomas, who died in 2010 aged three months from a sudden unexplained death.

One vile commenter said: "The child that died was the lucky one LOL".

"I have no issues with people not agreeing or believing my story or even a lighthearted joke," she said.

"But when it comes to personal attacks which even spills over into my work as an animal rights activist and also projected onto acts and events I manage it has to stop."

During her appearance, she told Eamonn Holmes and Ruth Langsford that their relationship turned bad just a few months after they wed.

She also claimed that her ghost lover tried to kill her by giving her sepsis .

"I started to get some very weird health ailments."

"My health was getting worse and worse," Amanda explained. "I got sepsis and almost died."

"[Ghosts] they need an energy source and he was bleeding me dry," she said.

She said: "Once I stopped having sexual contact with Jack, the abscesses started to improve.

"And I'd say that was literally the best three weeks I'd had since we got married.