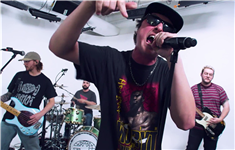 State Champs dove into nine songs during the band’s appearance on our Twitch channel on Wednesday. The group performed fan favorites like “Elevated” and “Secrets,” along with newer songs from their new album Kings of the New Age, from “Outta My Head” to the country-tinged “Act Like That” with Mitchell Tenpenny.

Kings of the New Age marks the pop punk group’s fifth album. “The main idea with this album, as opposed to [2018’s] Living Proof, was to take ourselves way less seriously, have a lot more fun, and show the youthful side of us,” singer Derek DiScanio said in a pre-performance interview. “We have been doing the pop punk thing for so long, and we need everyone to know that we’re the best at it.”

S.G. Goodman on Being a Queer Artist in Rural America

When asked about the genre’s burgeoning revival, the band took the renewed attention in stride. “Obviously, we’ve seen it take a roller coaster ride,” said DiScanio. “There was a resurgence, and then it went downward, and then Warped Tour went away, and it went downward. And now there’s the Machine Gun Kelly’s of the world making it popular again. And like, that’s totally cool. We like Machine Gun Kelly; he’s our friend.”

Guitarist Tyler Szalkowski also spoke on the highs and lows of making music in the genre for the past 12 years. “I feel like pop punk has been a dirty word for a minute, where it put you on this lower rung and you could never get out of it,” he says. “And now that it’s cool again or whatever, we feel as though we can finally embrace who we’ve always wanted to be — not chasing the image of what we thought everybody wanted us to be — to try to gain new fans or try to be a bigger band.”

State Champs will embark on the Sad Summer Festival Tour, an extensive North American trek with Waterparks, Neck Deep, Hot Mulligan, and Mayday Parade, in support of Kings of the New Age. The tour kicks off on July 8 in Sacramento, California — with a stop in New York, New York on July 22 — before wrapping on August 5 in Milwaukee, Wisconsin.

To see full-length interviews and to participate in live Q&As, tune-in to Rolling Stone on Twitch weekdays from 4 p.m. – 6 p.m. EDT. Follow us on Twitch to become part of the story in the chat, and subscribe for exclusive members-only bonuses. To continue the chat 24/7, join our Discord server.