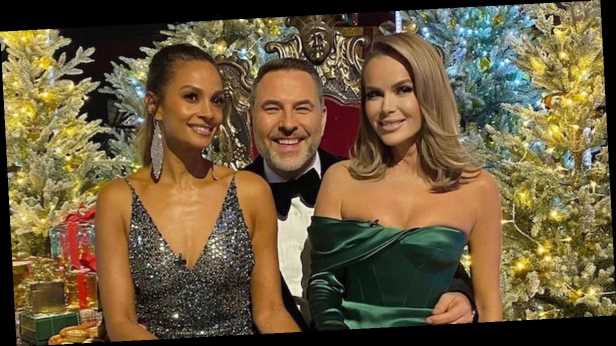 The blonde bombshell, 49, wowed as she joined her Britain's Got Talent co-stars Alesha Dixon, 42, and David Walliams, 49 for a festive photo.

David took on the role of Father Christmas in the picture as his stunning colleagues Amanda and Alesha perched on his knees as he sat on a grand throne surrounded by Christmas presents.

The stunning starlet looked like the ultimate Christmas cracker in the social media share as she rocked the green silky dress, which incorporated Amanda's signature sex appeal.

Amanda's dress featured a racy bustier top, which gave a glimpse of her eye-catching cleavage.

The skirt of Amanda's dress featured an eye-catching thigh-high split, which was slashed all the way to her hips.

Amanda accessorised with a pair of strappy high heels, which she fastened around her ankles.

She styled her golden locks into perfectly preened waves and added a smoky shadow to her striking peepers.

Alesha also opted for a thigh-split gown, opting to rock a strappy silver number, which featured a plunging neckline and on-trend festive sparkle.

The screen siren showed off her model-esque cheekbones as she pulled her hair back into a sleek ponytail and added a shimmering blusher to the apples of her cheeks.

Alesha accessorised with some perspex heels and some dangly bejewelled earrings.

The three posed for the snap to promote the Britain's Got Talent Christmas special, which airs on Christmas Day at 8pm.

BGT fans came out in their droves to lavish praise on the stunning shot.

While another continued: "You look amazing Amanda."