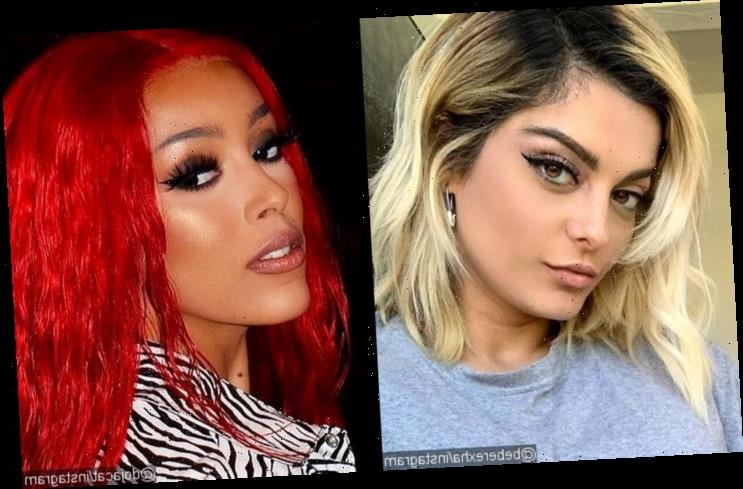 Unlike the ‘Me, Myself and I’ singer who is talking about her insecurities on the new tune, the ‘Say So’ hitmaker takes the confident route on her own verse.

AceShowbiz –Bebe Rexha has finally returned with new music. For her first release of the year, the singer teamed up with Doja Cat for a collaboration entitled “Baby, I’m Jealous” that made its way out on Friday midnight, October 9.

Her new song finds Bebe getting candid about her insecurities as she sings, “Went from beautiful to ugly/ ‘Cause insecurity told me you don’t love me/ All it takes is a girl above me/ On your timeline to make me nothing.” Unlike Bebe, Doja takes on the confident route on her own verse, “Baby, I’m a bad b***h/ If he fiendin’ he’ll prolly get a catfish/ Keep him dreamin’ to pull up on a nap, s**t.”

Bebe and Doja have also been teasing that a music video for the new tune will be released soon, with Hannah Lux Davis serving as the helmer. It’s unclear when the female musicians are going to unleash the visuals, though.

“Baby, I’m Jealous” is most likely going to be included on Bebe’s forthcoming second studio album. The “Me, Myself & I” singer confirmed the project last year, explaining in an interview with Bang Showbiz, “I am heading off to the studio now and I am just creating, creating and creating.”

Earlier this year, Bebe revealed to Ryan Seacrest at the 2020 Grammy Awards that her new album is inspired by her mental health journey. “I talk about everything. I’m bipolar and I’ve been very honest about mental health so I talk about that but it’s in a pop song so you can’t tell. I talk about my relationships — super deep stuff,” she said at the time. “The album is about a lot of my insecurities and fears so every song has to do with an insecurity that I have because I feel like people can relate to that.”