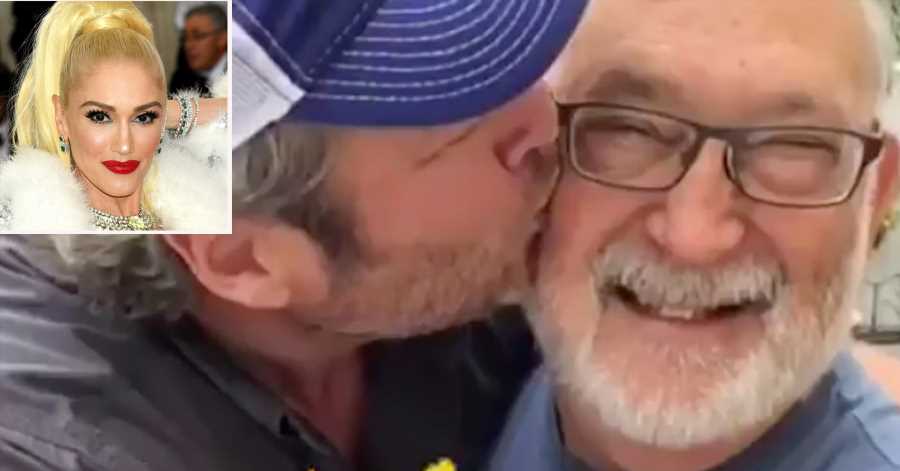 Gwen, 49, posted the patriotic photo of her boyfriend of nearly four years on Instagram, showing the “God’s Country” singer, 43, standing alongside a flagpole with his hat over his heart as the flag flapped in the wind overhead.

“Happy 4th of July muffins ❤️💥🎇🎆🇺🇸🇺🇸🇺🇸🇺🇸 Gx #vegasbound,” the singer captioned the shot, referencing her residency at Planet Hollywood in Las Vegas, which picks up again on Friday night.

America wasn’t the only recipient of a shout out from Gwen on Instagram. The former No Doubt frontwoman also dedicated a separate post to her father, Dennis James Stefani, who celebrated his 74th birthday on Thursday.

Gwen celebrated the occasion by sharing a touching video of her father playing guitar to the tune of “Twinkle, Twinkle, Little Star” while her 5-year-old son Apollo Bowie Flynn sings along beside him.

“Happy b day to the best dad /poppie in the world – not me w out u love u Dennis James Stefani,” she captioned the sweet clip.

The star also shared two snaps on her Instagram Stories in honor of Dennis. The first featured a throwback photo of the father-daughter pair with “Happy Birthday Dad” written across the screen.

Gwen also shared an adorable photo of Shelton, 43, planting a huge kiss on her father’s cheek as Dennis smiled for the camera.

The “Sweet Escape” singer last featured Shelton and Dennis on her Instagram in June for Father’s Day.

Like Thursday’s celebratory birthday photo, Gwen shared a snap of Shelton giving her father a kiss on the cheek as he wrapped his arms around Dennis. “I love my dad,” she captioned the shot.

The pop star, who shares sons Kingston, 13, Zuma, 10, and Apollo with ex-husband Gavin Rossdale, also posted a loving dedication to her dad with an Instagram post filled with childhood photos of her and her sister Jill.

“Happy Father’s Day to one of my favorite humans I know – #greatnesses always there for me and my boys I love I w all my heart #grateful #blessed #loveudad gx #littlesister,” the singer wrote.

Shelton has had plenty of time to bond with Gwen’s family, considering the pair will soon celebrate their four-year anniversary in November.

“It’s actually shocking that it has already been that long,” Shelton told PEOPLE on June 21. “It’s kind of a blur. It still feels like it’s pretty new to me. I guess it is, relatively. Four years isn’t forever, but man, it seems like it just happened in no time.”

In the fall, fans will get to see Shelton and Gwen return to the place where their romance first blossomed: the set of NBC’s The Voice. The No Doubt frontwoman is coming back as a coach for season 17 of the singing competition series, which will premiere on September 23.

Her return comes on the heels of longtime coach Adam Levine’s announcement in May that he would be departing the show.

Though filming of the Blind Auditions has just begun for the couple and their fellow coaches Kelly Clarkson and John Legend, the friendly competition is already heating up.

In between documenting the pizza party she threw for Shelton’s birthday two weeks ago, Stefani shared a photo of Shelton to one of Instagram Stories with the message, “Getting excited to beat this guy on the voice this season!”

“I’m glad that she’s already feeling competitive,” Shelton told PEOPLE in response. “Of course, I’m not going to let her win. I’m going to have to win, but I’m going to have to do it in a way that she doesn’t feel like I beat her. I don’t know if that’s possible or not because I definitely don’t want to upset her — that’s not going to pay off for me in the long run. This will be her fourth time on the show, so she’s no stranger to it. She knows what she’s doing.”

And with speculation growing about whether an engagement is on the horizon for the happy couple, Shelton — who went through a divorce with country star Miranda Lambert in 2015 — recently told Entertainment Tonight, “I gotta say that we couldn’t be happier, and we’ve never been doing better.”

Though he scoffed at the constant wedding rumors, he also hinted that a proposal isn’t totally out of the question.

“[Our bond] gets stronger every day,” he said. “Obviously, that’s gotta lead somewhere.”