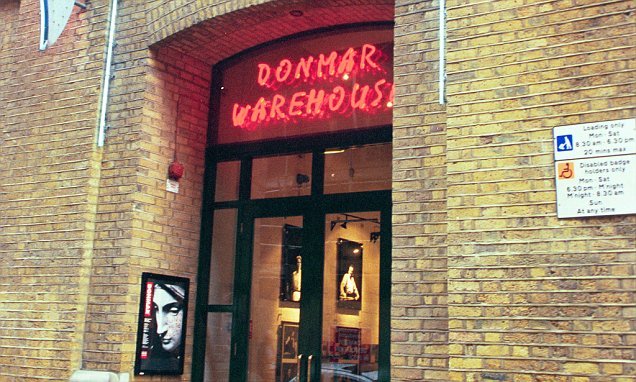 TOM UTLEY: Warning! This column contains language that some might find offensive… in our potty PC world

Writing my very first column for this newspaper, 13 years ago this summer, I recalled the opening lines of a school production of Ali Baba and the Forty Thieves, which it fell to me to deliver in the mid-Sixties when I was 12 years old.

Before I repeat them, I should caution those of a politically-correct disposition to read no further, since they contain language that may cause deep offence.

With that trigger warning out of the way, this is how the lines went: ‘A thousand pounds the rascal says is due!/ Forsooth, he drives me hard, this skinflint Jew!/ Would I could seize him as in times of old/ And torture him till he disgorged his gold!’

As I observed in that debut column, I remember the schoolmaster in charge of the production instructing me to spit out the word ‘Jew’ with emphatic contempt.

These days it would be unthinkable for any primary school to stage a children’s play containing offensive lines about torturing skinflint Jews, while any headteacher who sanctioned such a performance would be out of work within 24 hours. 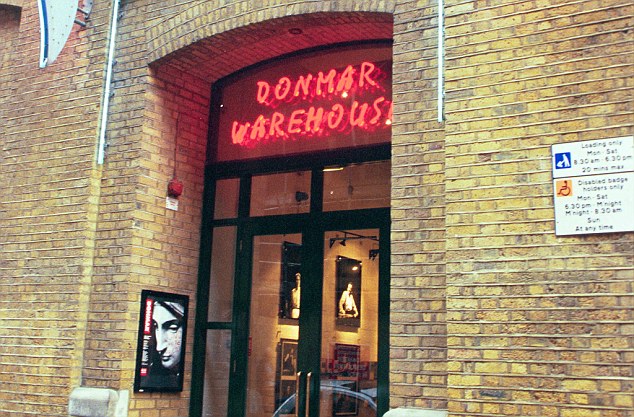 TOM UTLEY: This week brought another giant leap beyond the bounds of parody, with the news that a theatre company has begun issuing trigger warnings to ticket buyers, outlining details of scenes that sensitive souls may find offensive (the theatre is pictured)

How times have changed — and in this case, I reckon, for the better.

Political correctness gets a terribly bad press, often deservedly. But much that is condemned as PC is simply good manners and respect for our fellow human beings.

As it happens, I don’t remember there being any Jewish boys among the 100-odd pupils at my predominantly CofE boarding school in rural Suffolk. (I was one of less than half a dozen Roman Catholics at the school — and how our schoolmates mocked us, accusing us of believing superstitious nonsense about bread turning into human flesh or plotting to overthrow the Protestant monarchy).

But as I said 13 years ago, I can well imagine that if there had been any Jews among us, they might have been upset by a school play that trotted out the casually anti-Semitic stereotype of Jews as miserly usurers — a prejudice that may linger on in Jeremy Corbyn’s inner circle of Pro-Hamas and Hezbollah, anti-capitalist fanatics, but which is mercifully much less widespread in 2019 than it was half a century ago when I was growing up.

Say what you like about the new chattering classes’ obsession with political correctness, but at least it has made most of us stop and think before expressing views that may be construed as sexist or racist or behaving in ways that may cause gratuitous offence.

There comes a point, however, where sensitivity to other people’s feelings —highly laudable in itself — is allowed to stray far beyond common sense into the realms of the downright disturbing.

Many will say that we reached this point years ago, with the spread of ‘safe spaces’ in universities and the ‘no-platforming’ of speakers who may open students’ minds to ideas that challenge the orthodoxy drummed into them at school by an increasingly Left-wing teaching establishment. Don’t you have to rub your eyes to believe that speakers have even been turned away from campuses for having expressed the conventional view that women don’t have penises?

As my mentor, the great Sir John Junor, late of this parish, might have put it: ‘It’s enough to make you pull the duvet over your head and turn your face to the wall.’

But the PC brigade marches on, piling absurdity upon absurdity. This week brought another giant leap beyond the bounds of parody, with the news that a theatre company has begun issuing trigger warnings to ticket buyers, outlining details of scenes that sensitive souls may find offensive.

Now, we’ve all grown used to warnings on the TV about nudity and violence which ‘some viewers may find upsetting’ (though, God knows, it’s unusual to come across a drama that contains neither).

For many years, we’ve also been warned about flashing lights, which is fair enough, since these can cause epileptic fits.

But London’s Donmar Warehouse has gone a step further, issuing detailed warnings on its website about scenes that may offend the politically correct. And never mind if these ‘content advisories’ may give away crucial details of the plot, thus robbing the play of the surprise factor.

Similarly, those thinking of buying tickets to Caryl Churchill’s Far Away, which opens next February, are warned: ‘There are multiple descriptions of violent acts towards people and animals towards the end of the play.’ As for those tempted to go to Lynn Nottage’s Sweat, opening in December, they are told: ‘Several characters are seen to be under the influence of drugs at multiple points during the play.’ 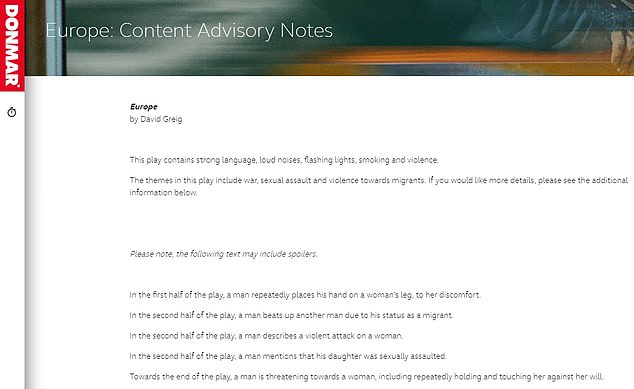 An example of a content advisory note for the play Europe, on show at the Donmar Warehouse

It makes you wonder how those who might be put off buying tickets by the fear of witnessing any such horrors can cope with modern life in a drug-ridden real world full of violence and men who pay unwelcome attention to women. Every news bulletin, every day of the week, must have them reaching for the smelling salts.

My first thought on reading this story was that it was a clever PR stunt to publicise Donmar’s programme. If so, I’ve fallen for it hook, line and sinker, and I doff my cap to the genius who thought it up.

But the theatre’s executive producer, Henny Finch, insists there is no such ulterior motive. She tells The Guardian: ‘I think it is just about being considerate to all audiences, making sure everybody feels comfortable and making the theatre as accessible as possible.’

Meanwhile, theatre blogger Terri Paddock says she sympathises with the Donmar’s stand, but fears it may do more harm than good to ‘our cause of liberalism’ by exciting the ridicule of Right-wingers (she can’t, by any chance, be thinking of Daily Mail columnists, can she?)

As she puts it: ‘I worry that it will be twisted by people who want to see it as an over-reach, or over-sensitivity, or political correctness gone mad.’

Forgive me, but I find it hard to see how any moderately sane person — without twisting anything — could see it as anything other than, as she puts it, political correctness gone mad. Anyway, I’m looking forward to reading the Donmar’s ‘content advisories’ when it next tackles the works of Britain’s greatest ever playwright — never a believer in the need to make theatre-goers feel ‘comfortable’.

Or the Taming Of The Shrew: ‘Contains scenes of sexism, domestic violence and coercive control of a woman.’ That’s not to mention Titus Andronicus, with its scenes of rape, cannibalism and dismemberment almost from beginning to end.

But then even Jane Austen’s Pride And Prejudice, in which women’s status is defined by their menfolk, would surely merit a warning to hypersensitive feminists — while vegans and animal rights enthusiasts may suffer fits of the vapours over Walt Disney’s Bambi, whose mother was shot by a hunter, or Beatrix Potter’s Peter Rabbit, whose father was baked in a pie.

But as I say, political correctness is not always to be mocked — and it’s certainly a good thing that, more than 50 years since I appeared in Ali Baba and the Forty Thieves, no primary school would dream of staging a production that risked giving casual offence to a minority.

But shouldn’t a West End theatre company do us the courtesy of treating its audiences like grown-ups?

I can think of only two trigger warnings of which I would heartily approve. The first, which could apply to almost every playhouse in theatreland, would caution: ‘Patrons may be distressed by the price of drinks in the interval.’

The other I’d reserve for every production of Samuel Beckett’s Waiting For Godot: ‘Contains scenes throughout which many may find intensely boring.’