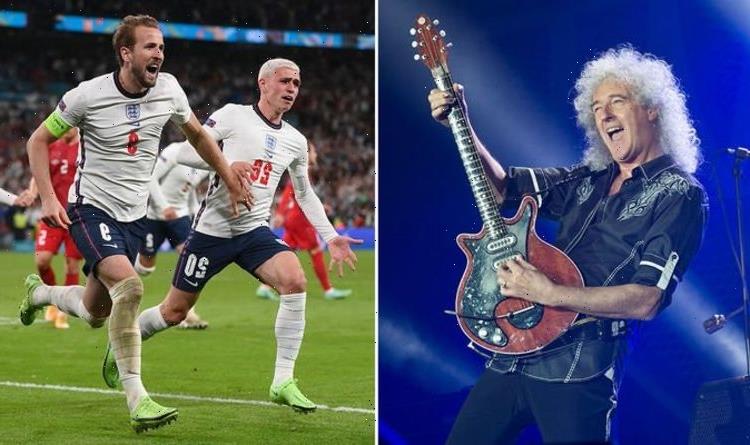 Brian May asks his fans who they are 'driven' by

Like millions of Brits, Queen guitarist Brian May will be watching the Euro 2020 final between England and Italy tonight. And now in a new Instagram post, the rock legend has shared how touring all over the world has affected how he will view the football match this evening. The 73-year-old shared a picture of the England team huddling around captain Harry Kane after he scored a goal in a previous game.

Brian wrote: “I find this picture very moving – as well as a work of art in itself.

“On the day of the big Euro football final, here in the UK, there’s a massive surge of energy – it’s everywhere – because the English football Squad hasn’t got to the final of an international match since 1966 !

“I got all fired up the other night and played a bit of the English football ‘anthem’ on IG. And it was a very sincere feeling that drove that.”

The 73-year-old said how he felt it would be false of him to pretend he was a dyed-in-the-wool football fan, but remembers watching England win the World Cup in 1966.

Brian continued: “I watched the English cup final with my dad when I was a kid, when Stanley Matthews scored a hat-trick to secure a win in the Blackpool versus Bolton final.

“I feel something when I see the great athletic skill and dedication of those young men.

“But in my life, I haven’t been a partisan supporter of any team. Of course nobody could ignore the excitement of this present moment in English sport.”

The rock star said he will be watching England play this evening with a feeling of admiration and pride.

Brian added: “But, having toured the world so many times with Queen, and fallen in love with audiences of every nationality, the feelings inside me are a little different from most, perhaps.

“There are a lot of parallels between football and rock music. They’re both entertainment. They both embrace the pursuit of excellence. At their best, they both inspire their audiences to reach for the best in themselves.

“But in a Queen show, or a rock show, every member of the audience is on the same side.”

He said how in a concert there is no feeling of competition; that there are no losers but only winners.

Brian concluded: “So, in a strange way, I have a similar feeling watching a football match.

“Every one of the players on that field tonight, either from England or Italy, has a family in the stands or at home, crying tears of joy, watching their boy giving his all, at his physical and mental peak.

“I will be praying that every one of those brilliant young men comes away from tonight feeling that they gave their best, for themselves, their family, and their country. May the best team win. But may everyone come out of it feeling like a winner. Bri.”

As he mentioned, the Queen legend performed the Three Lions guitar riff in support of England during another recent video.

Brian May plays his Red Special guitar in 2014

He captioned the video: “OK – This is my contribution ! An invitation to join in on a very topical tune ! Loop it if you like ! Play !

The Queen legend began by saying, “One for the boys”, before starting the riff as “It’s Coming Home” appeared on the screen in the white and red of the England flag.