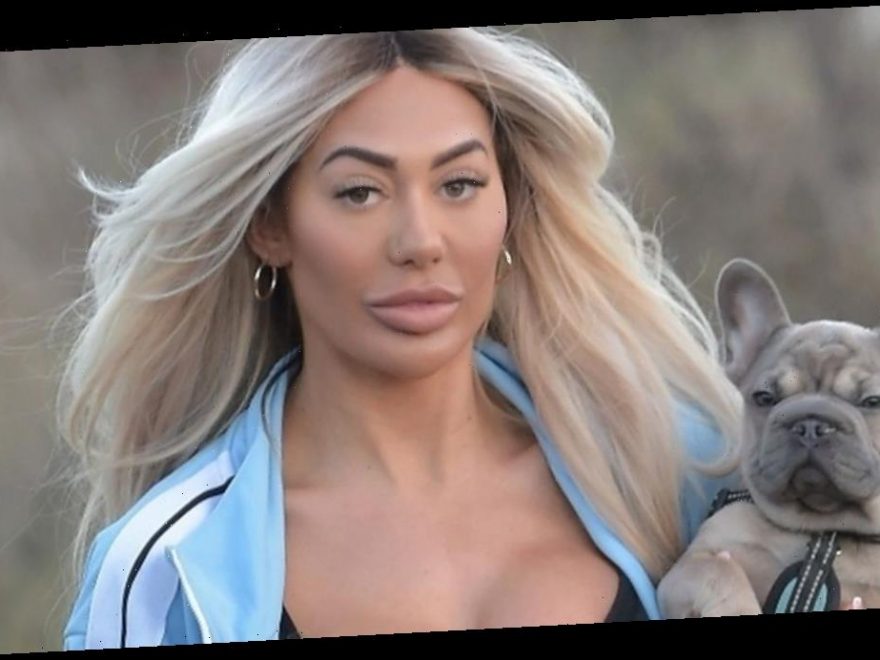 Geordie Shore bombshell Chloe Ferry clearly wasn't feeling the cold this weekend as she stripped down to a tiny bra to walk her dog.

Chloe, 25, showed off her jaw-dropping figure as she donned just a black bra with blue jeans and an unzipped blue jacket over the top for the brisk walk.

The blonde beauty flaunted a serious amount of cleavage as the top struggled to contain her ample assets during the trip out of her home.

She finished the look off with bright white trainers as she braved the chilly winds in Newcastle under the oversized jacket for the countryside walk.

Chloe kept her blonde locks loose as they cascaded over her shoulders in the wind, while she kept her make-up casual with just a nude lip and lashings of mascara,

She was seen with her two French Bulldogs Ivy and Narla in tow for the countryside stroll.

Recently, Chloe was forced to take to social media to defend herself after she told by trolls that she was "too skinny" after losing two stone in lockdown.

After posting a snap which documented her changing figure, Chloe hit back at the cruel comments as she told her trolls to keep their opinions to themselves.

She said: "I can't get over social media. Obviously I posted a photo this morning because I'm feeling good about myself finally.

"And people are like, 'You're too skinny'. Before I was too fat, and now I'm too skinny. Honestly just keep your comments to yourself.

"Obviously I have been getting comments before saying, 'You're losing too much weight, you're getting too skinny' but I've ignored it.

"But the amount of comments that I've had to delete off my photo today about people saying I need to put weight back on, they're worried for us.

Chloe is set to appear in the next series of Celebs Go Dating, which airs next year.

She and her fellow celebs, including Curtis Pritchard and Wayne Lineker, had to bubble in a lavish Surrey mansion while their prospective dates came to stay with them.