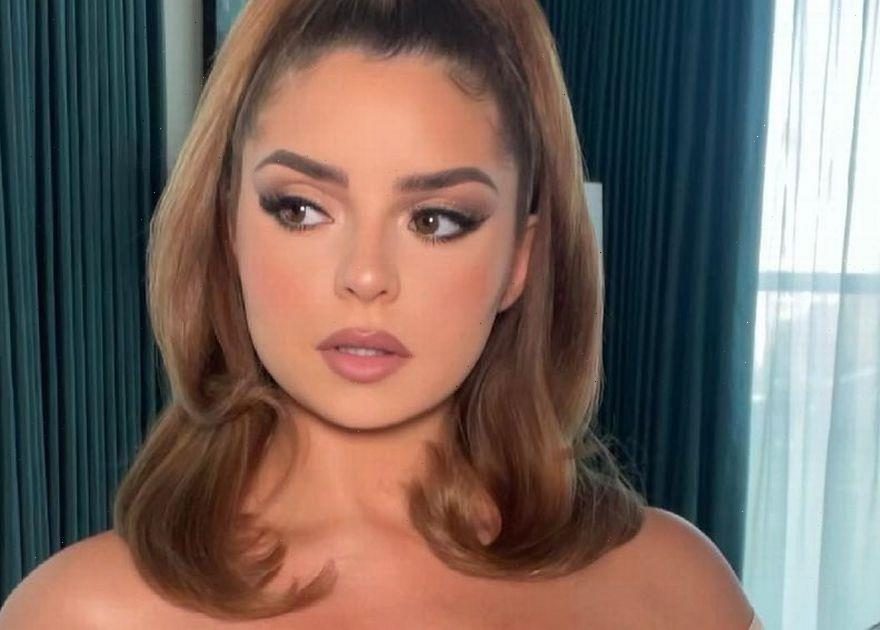 The Wolverhampton-born beauty looked sensational, as she opted for a slightly different look as she channeled Old Hollywood vibes.

Demi looked out of this world in the photo as she donned a show-stopping dress, which certainly turned heads.

The blush-coloured frock featured a striking corseted top, which featured a Rococo-inspired painting.

The dress featured pink silky Bardot sleeves, which fell down her arms and a pink skirt, which she pulled up on one leg.

She pulled her brunette locks back into a half ponytail, which saw loose waves sit atop her shoulders.

Demi went all-out in the makeup stakes, adding a sultry smoky shadow to her striking peepers and a bold splash of highlighter to her cheekbones.

Demi captioned the snap: "The Goddess doesn't enter us from outside; she emerges from deep within. She is not held back by what happened in the past. She is conceived in consciousness, born in love, and nurtured by higher thinking."

And Demi's fans definitely thought she looked like a goddess, as they rushed to shower praise on the photo.

While another continued: "Total goddess." As well as wowing fans with her sizzling snaps, Demi has used her huge platform to open up about her grief.

Demi lost her dad Barrie Mawby at the end of 2018, and then tragedy struck once more in June 2019, when her mother Christine passed away.

Demi has shared on her Instagram page previously how spirituality and mental wellness has helped her.

Discussing losing both her parents at the age of 24, Demi previously told Daily Mail: "Well my mother, when I was 17, she had a heart attack which caused a stroke and left her disabled.