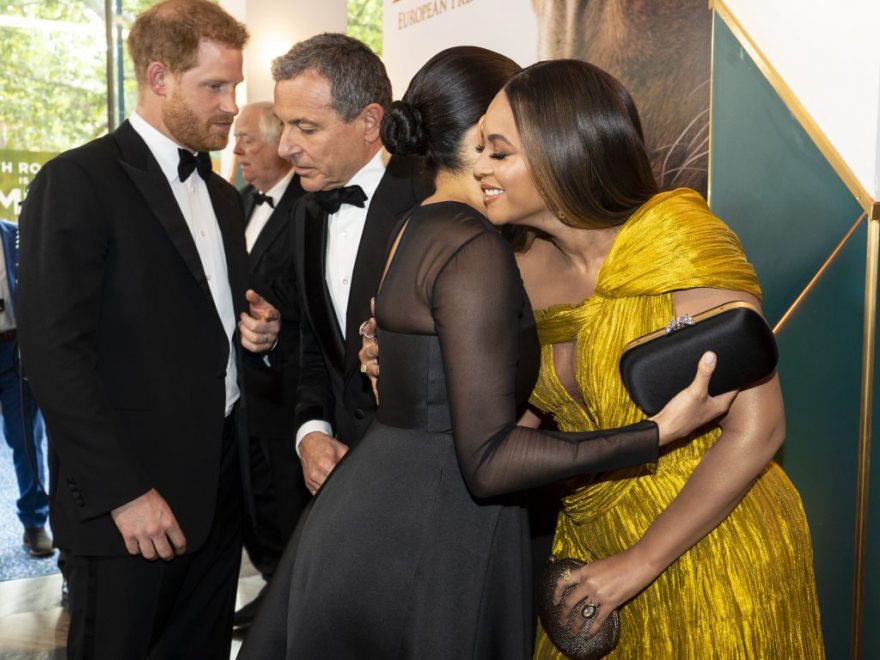 When Meghan Markle steps out in public, controversy follows. Normally, the public and press have a tendency to chastise Markle for various things that she does, from her wardrobe choices to the way she holds her son, Archie Harrison. However, during one of Markle’s latest public appearances, it wasn’t the Duchess of Sussex who earned the most criticism.

Instead, it was Beyonce: the iconic singer who has openly professed to admire Markle in the past. Read on to see just how and why Beyonce and Markle crossed paths and whether the singer broke royal protocol during their meet and greet.

Beyonce and Meghan Markle both attended a movie premiere

Markle is still on maternity leave, following the birth of her and Prince Harry’s son in early May. However, she has been stepping out more and more lately, on certain special occasions. One of those special occasions was the mid-July premiere of The Lion King, Disney’s re-imagining of the animated classic. Prince Harry and Markle were special guests at the exclusive event, and expectations surrounding their appearance at the film’s premiere were high.

Also, honored guests at the premiere were Beyonce and her husband, rapper Jay-Z. While it was suspected that Beyonce would eventually cross paths with the royal couple, no one could have quite anticipated the level of scrutiny that their interaction would receive over the next few weeks.

According to reports, every guest at the premiere was prepped in advance and given specific rules for how to greet Markle and Prince Harry. Some of the rules that were laid out stated that no one was to hug either of the royals, no one was to ask for selfies, and no one was to address them unless they were spoken to first. Everyone was also instructed to address either Markle or Prince Harry as, “Your Royal Highness.” While it might seem as though these rules are stringent, they are actually fairly standard. However, not everyone would end up abiding by the code of conduct communicated prior to the event.

When Markle and Prince Harry got to where Beyonce and Jay-Z stood in the premiere receiving line, Beyonce dropped all semblance of formality. The iconic singer addressed Markle as “my princess,” and gave her an affectionate hug — none of the stiff hand-shaking that had been in the royal meeting rulebook. The two women chatted briefly before Markle and Prince Harry had to move further down the receiving line and meet more guests.

Is Meghan Markle angry with Beyonce for breaking royal rules?

There’s little doubt that Beyonce broke several of the royal rules that she was to abide by when meeting Markle. Whether or not she was chastised privately, no one knows, although it seems unlikely. After all, Beyonce occupies rarified air in the world of celebrity culture and she tends to go by her own unique set of rules.

One thing’s for sure, Markle certainly didn’t seem bothered by Beyonce’s affectionate greeting at the movie premiere. She responded with a hug when Beyonce offered it, and her smile seemed genuine and pleased. It seems as though Markle is very appreciative of Beyonce and Jay-Z’s numerous nods to her in their work, including a framed portrait of Markle in a royal pose, complete with crown and jewelry, in one of the music videos. According to some reports, Markle has even responded positively in private to the honor, so it could be that her hug with Beyonce was her way of thanking the woman for her support and encouragement.