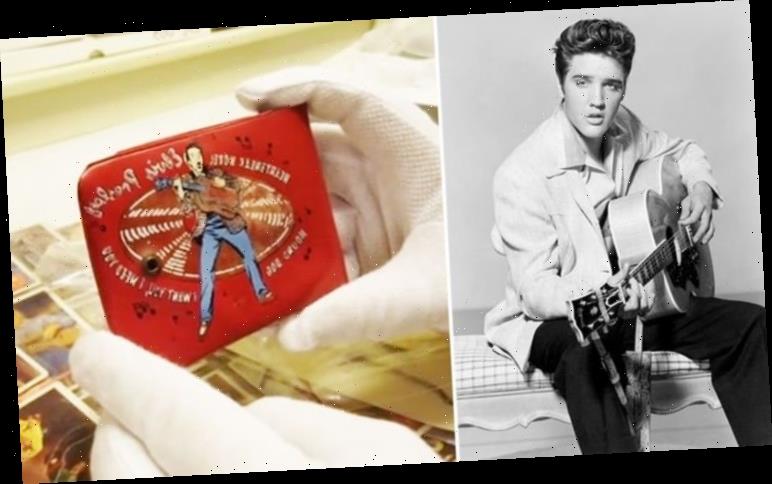 Back in 1956, Elvis Presley became an international sensation, which his business-savvy manager Colonel Tom Parker took full advantage of with a major marketing plan. According to Graceland, Elvis was one of the first artists to have his name, image, and likeness on everything from bubblegum cards to shoes. Now personal pieces of The King’s 1956 memorabilia have been shown off in a new video from inside the top-secret Graceland archives.

They included everything from The King having a vacation to studying a script, to an on-set photo from one of his Hollywood movies.

Angie revealed that in just six months during 1956, Elvis memorabilia made over $20 million in sales.

Adjusted for inflation that’s over $190 million in today’s dollars. 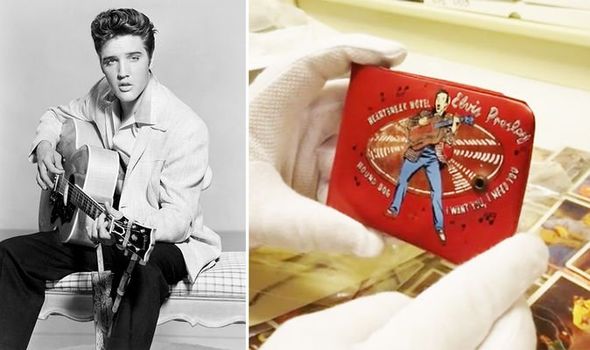 The Graceland archivist then showed fans an original Love Me Tender necklace.

The 1956 musical Western was Elvis’ acting debut at the age of 21-years-old.

Angie then moved on to some dog tags and scatter pins of a broken heart and pooch representing The King’s early hits Heartbreak Hotel and Hound Dog.

While another highlight was a flipbook of Elvis dancing – moves that were very controversial back in 1956. 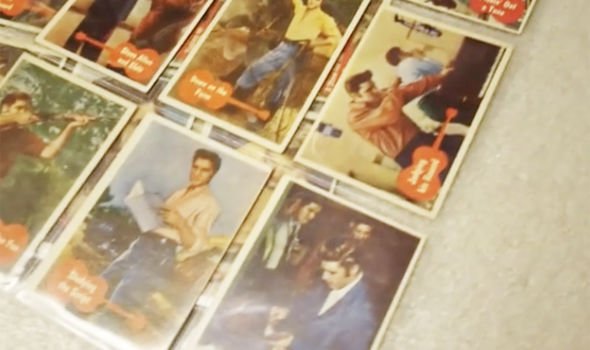 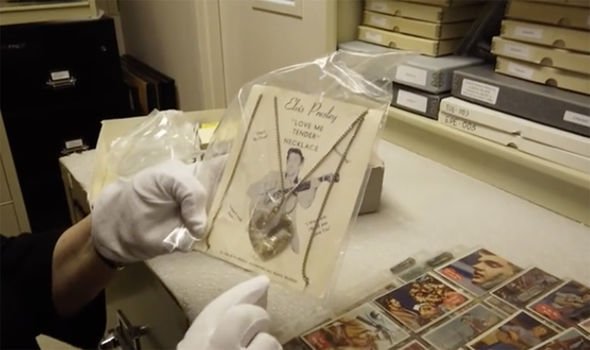 Finally, Angie brought out a beautifully preserved Elvis wallet with the names of his song on it.

Meanwhile, this year will see the release of the hotly-anticipated Elvis movie biopic from Warner Bros.

Moulin Rouge! director Baz Luhrmann is helming the project with Once Upon A Time In Hollywood’s Austin Butler starring as The King.

Tom Hanks co-stars as Colonel Tom Parker, a role which required the Oscar-winner to shave his head.

DON’T MISS
Elvis death myth debunked: He did not want to die to be with Gladys [EXCLUSIVE]
Elvis accepted ONLY award he collected in person 50 years ago today [AWARD]
Elvis Presley’s early girlfriend on ‘very shy’ star and singing talent [EARLY GIRLFRIEND]

However, when Hanks’ coronavirus diagnosis and the lockdown closed down production, both stars had to withdraw from the movie due to being committed to other projects.

The Elvis movie is shooting in Queensland, Australia and Baz has shared a couple of set photos of himself wearing a TCB (Taking Care of Business) facemask.

According to the official synopsis, Elvis is “seen through the prism of [Presley’s] complicated relationship with his enigmatic manager, Colonel Tom Parker.

“The film delves into the complex dynamic between Presley and Parker spanning over 20 years, from Presley’s rise to fame to his unprecedented stardom, against the backdrop of the evolving cultural landscape and loss of innocence in America.

“Central to that journey is one of the most significant and influential people in Elvis’s life, Priscilla Presley.”

Elvis is released in cinemas and on HBO Max on November 5, 2021.