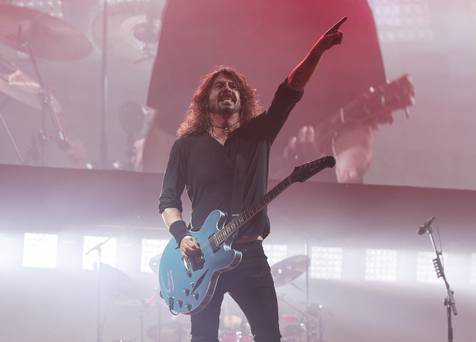 At the end of the Foo Fighters’ show at the RDS last night in the rain, Dave Grohl stood on the stage before 40,000 disciples like an Aztec god of alt.rock. This is what he told them.

“I can’t believe not only are we still here but you are still here. So, ladies and gentlemen, thanks so much for coming out to the rock and roll show tonight. How many times have you heard people f***ing say that rock ‘n roll is dead? How many f***ing times have you heard that? I hear that s**t every f***ing day. And all I can say is I wish you could stand right here and look at all these people because, f*** man, all I do is bring rock ‘n roll everywhere I go. And it is f***ing like this! I love it! I love this s**t! It’s true!”

The god Grohl then paused, looking, for a moment, like he was briefly overcome with sadness.

“I hate this is say this is the last f***ing song, I cant believe this is the last one,” he said introducing Everlong, “So, let’s have one one f***ing dance. Dance with us!” And dance they did to the gnarliest rip-roaring rumble in the rain of Everlong, a song, so the story goes, that Grohl wrote at Christmas in 1996 when he was sleeping on a friend’s floor in a sleeping bag after getting divorced from his wife Jennifer.

“Hello, I’ve waited here for you

Tonight, I throw myself into

And out of the red, out of her head she sang

Come down and waste away with me

Slow how you wanted it to be

I’m over my head, out of her head she sang!” he sang at the end of an exhilarating two hour hardcore-fun show. The floor of the RDS Arena, where horses had trotted so elegantly out recently, was literally bouncing because 40,000 people were jumping up and down like it was the greatest night of their lives.  For Dave, the song they were bouncing so joyously out-of-kilter to itself marks one of the greatest nights of his life: November 2007 when the Foo Fighters opened up in Canada for Bob Dylan on his Modern Times tour and Grohl in his dressing room is summoned to meet The Zim.

“So I walk out,” he told Mojo magazine in 2009, “and he’s standing like a silhouette in a dark corner — black leather boots, black leather pants, black leather jacket. He said, ‘What’s that’s song you got, the one that goes “The only thing I ever ask of you is you gotta promise not to stop when I say when”?’ I said, Oh, yeah, Everlong. He said, ‘Man, that is a great song, I should learn that song’.” Grohl laughs loudly. “So I don’t give a f*** what anybody else thinks,” he adds. “Bob Dylan likes one of my songs. That right there is enough for me.”

Last night was enough was me too. I don’t think you could have seen more energy come off a stage even if you had hooked up a nuclear reactor backstage. Dave Grohl , this kid from from Warren, Ohio, who wanted to be a helicopter pilot (“I’d take the storm windows off of our house and set them up in this little cage thing around me,” he once said in an interview, “I’d sit and pretend I was in a helicopter”) plays the guitar with an intensity that at times is unfathomable. Like he is falling out of a helicopter. With his life-saving guitar strapped to his back.

When he played Run — which has explosive echoes of Led Zeppelin’s Immigrant Song and At the Drive-In’s One-Armed Scissor and, if it was produced by Pavement — he passed the energy of the song straight to the audience, who he implored in his own inimitable style, “Dance! Dance! You crazy Irish motherf***ers!” “

Run for your life with me

Run for your life with me

In another perfect life

In another perfect light

The rats are on parade

What you gonna do?

The hounds are on the chase

What you gonna do?

I need some room to breathe

You can stay asleep!” he screamed almost with primal rage into the mic.

“It’s basically that need to escape when you feel like everything is coming down around you, that you just want to find a perfect place, or another perfect life, where you’re free to run,” he told Kerrang magazine of Run. I think a lot of young people in the crowd last night who can’t afford to rent in their own country felt that same need to escape or run from Ireland.

With Taylor Hawkins behind him — looking like Janice,  the lead guitar player in The Electric Mayhem on The Muppet Show but playing Keith Moon channeling Mudhoney  — The Foo Fighters crashed into The Sky Is A Neighborhood (backed by a choir of teenagers or young kids) and before that The Pretender and the thunderous Learn To Fly. The latter again had the floor of the arena at the Royal Dublin Society vibrating like it was experiencing an earthquake. And in a way last night it was. “I didn’t come here to f*** around,” Grohl said giving his mission statement after a few songs. I came here to play rock ‘n roll music. I’m getting warmed up now.!””

And then on My Hero, he told the crowd: “Sing it louder than that crazy motherf***ers!” And they did.  [For the record, Dave Grohl turns the phrase “crazy motherf***ers” into a cockle-warming welcome, like an old friend you haven’t seen for years inviting you over for a meal and a glass of chilled Chablis.]  There was a beautiful cover of Queen’s Under Pressure and bits of Thin Lizzy’s The Boys Are Back In Town and Jailbreak, Bowie’s Ziggy Stardust; during the drum solo ‘intermission’ part of the show, Taylor Hawkins on his highrise drumkit (Kurt Cobain was quite possibly turning in his grave at the cabaret of this moment that owed more to Kiss or Motley Crue than it did to Scratch Acid or The Vaselines) treated the crowd to the military drum solo of U2’s Sunday Bloody Sunday.

You want blood? There was plenty of it last night. During the metal mania of Monkey Wrench, Grohl was ripping out his bloody heart and showing it to the crowd as he sang: “What have we done with innocence? It disappeared with time, it never made much sense/ Adolescent resident/ Wasting another night on planning my revenge.”

The song, as he said in 2010 interview, is about the decay and death of his marriage to Jennifer. “It’s about living with someone and feeling like you’re living in a f***ing cell. And then I wound up getting a divorce.”

“That song is a little dirty,” he explained a few years ago. ” I’m very fond of giving oral sex to women. It’s a pleasure-giving experience, giving someone something that they’ll remember for the rest of their lives. And if you do it right, they will.”

Last night for 40,000 lucky people Dave Grohl did it right. And many of them will remember it for the rest of their lives.