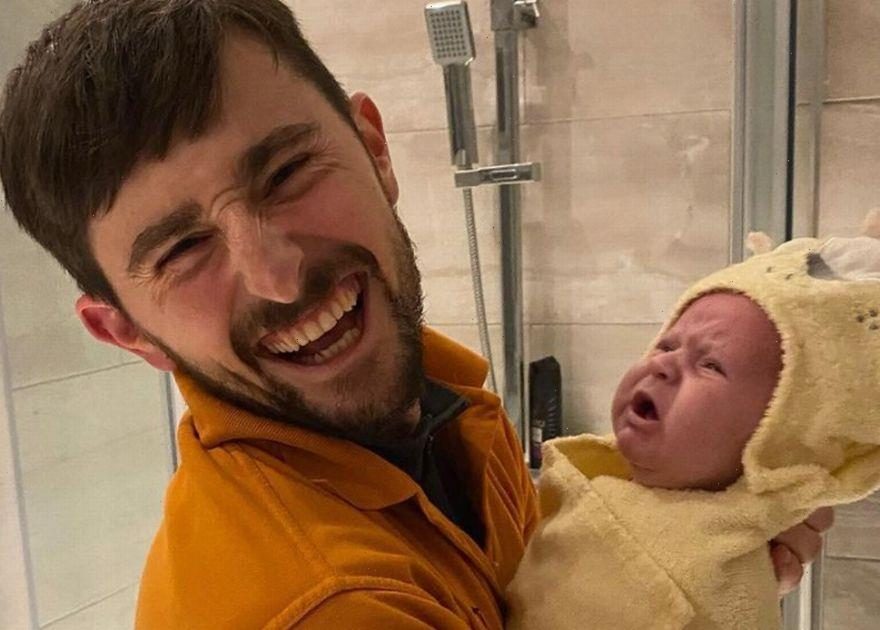 Gogglebox's Pete posted a picture showing the proud dad posing with his newborn, cracking a cheesy grin for the camera whilst wearing an orange and black polo shirt.

Stood in the bathroom holding his son, his son looked up at him with a distraught look on his face whilst sporting an adorable lion onesie complete with mane and a cartoon face.

As Pete finally shared the name of his son with his followers, he captioned the post: "Jimmy wishing his daddy a happy birthday."

Pete was met with thousands of likes as he hit upwards of 42,000 while his friends and followers shared well-wishes for his birthday, but others couldn't help but chuckle at the snap.

One fan joked: “I wonder what Jimmy is thinking, he looks furious in those eyes.”

The couch dweller married his partner after baby Paige arrived. At the National Television Awards, he proudly showed off his ring and told OK! magazine: "I'm married now! It was nerve-wracking but the best day of my life. Well, second-best day as I'm a dad now, too.”

"I'm buzzing [to be at the NTAs] as I got a full night's sleep in a hotel so I'm well happy," he added, before adding: "[Being a dad is] tiring.

"The lack of sleep is not cool but it's definitely worth it! He's basically a miniature version of me and Paige and that's what I always wanted so I feel well lucky."

When he’s not on Gogglebox, Pete works in the insurance industry.

Pete revealed he was becoming a dad on Gogglebox and spoke at the NTA’s in September about the happy news: "It's a bit overwhelming, got it all going on at the moment! He's cool little lad, takes after his mum not me!".

During the show he showed his sister a picture of the baby scan: "Here we go, look at this,” Pete said, before admitting he couldn’t believe he was going to be a father. As Sophie looked at the pictures, Pete said: "Innit mad? I am actually going to be a dad to somebody."

Sophie then responded: "Crazy. Life’s coming at you fast," referring to the couple's recent engagement.

After Pete shared the news on Instagram his uncle Paul Chuckle from The Chuckle Brothers commented: “A very pretty baby mate…congratulations to you and Paige, fantastic news #greatgreatunclepaul xx”.