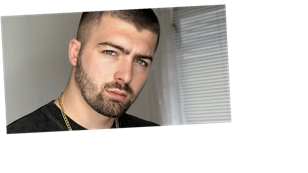 Former Gogglebox star, Tom Malone Jr has landed himself a surprising new role, following on from his shock departure from the Channel 4 show last month.

Tom, 26, appeared on Gogglebox for six and a half years and although he may not be returning to the show, his family will still be a part of the main Gogglebox cast.

Last week, BigDug, a shelving and supplies retailer, uploaded a video of Tom and revealed that he is now officially 'Head of Chair Testing' for the company.

Tom seemed to be very excited about his new role and in an Instagram post on BigDug’s account page Tom said: "Want to know what it's like to be a grown man paid to test chairs? Check this out.”

He continued: “So, after all my years on Gogglebox getting really good at sitting on my arse, BiGDUG offered me a new job sitting on my arse. It's a hard life being a chair tester but you know we make it work.”

In his unconventional new role, Tom’s main tasks will be to test the seats and rate their comfort levels on social media.

Tom made the shock announcement that he will no longer be a part of Gogglebox last month and revealed that he wanted to explore new opportunities.

Tom said: “So after 6 and a half years it's finally time to put down the remote, and to say goodbye to Gogglebox.”

He added: "I've loved every minute and I'm eternally grateful [email protected] and @studiolambert for allowing me to be a part of the show. But new opportunities are knocking on the door and it's time to explore them.

"I look forward to enjoying the show as a viewer and not having to worry about having said something stupid.

"PS. Don't worry my family @themalonesgb and @shaunmalone95 will still be on the show to keep you guys entertained every Friday.”

Daily Star recently reported that Tom has been tipped to make almost £200,000 in the first 12 months after his departure from the show.

Gogglebox is on Channel 4 on Friday evenings at 9pm.