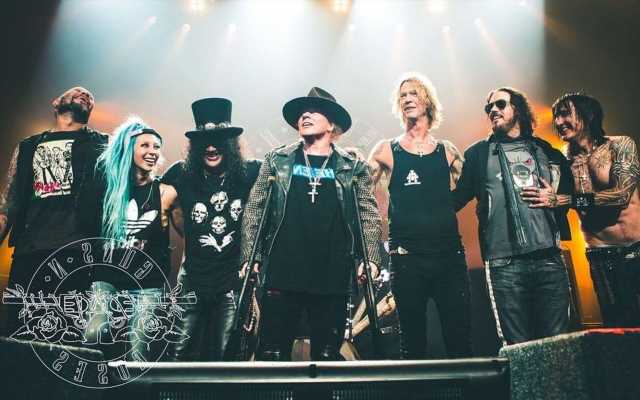 AXL Rose, Slash, and their bandmates are reportedly in talks to take one of the main stages at the upcoming annual Worthy Farm music festival in UK next summer.

AceShowbiz –Guns N’ Roses are in discussions to headline Glastonbury. The “Welcome to the Jungle” hitmakers look set to take to the Pyramid Stage at Worthy Farm in Somerset next summer, which will mark the band’s first time ever performing at the world famous festival.

“It’s hard to find earth-shaking bands that have not performed on the Pyramid Stage before and Guns N’ Roses are up with there with the all-time greats. The booking has been a long time coming and it looks likely that it’s finally going to come together. It will be a much-needed Glasto addition for hard-rock fans,” a source told The Sun on Sunday newspaper’s Bizarre column.

The outlet also reported Sir Elton John is looking to make changes to the schedule of his farewell tour in order to fit in an appearance at the festival.

Organiser Emily Eavis admitted last year she would love to get the US rockers – who are currently on tour in Asia and performed in the UK last summer – on board for the festival. She said, “I think Guns ‘N Roses need to play here at some point, don’t they?”

While the ‘November Rain’ group have never appeared together at the festival, guitarist Slash performed on the Pyramid Stage in 2010 and later revealed he had accidentally found himself in the middle of the crowd.

He said, “My security guard and I mistook the backstage area for the front. The next thing, we were in the midst of the ticket-buying public, which was an interesting experience. I always thought it would be cool to dress in some sort of disguise and go wandering around the crowd.”

Other artists rumoured to be playing at the festival next year include Arctic Monkeys, Rihanna, and Eminem. A source recently said of the “Umbrella” hitmaker, “Rihanna has been approached about Glastonbury and next year’s festival would be just the right timing for her.

“She is a huge name for Worthy Farm and would be the perfect addition to the line-up. Everything about Rihanna’s music comeback is being closely guarded but her team has been talking with the Eavis family.”