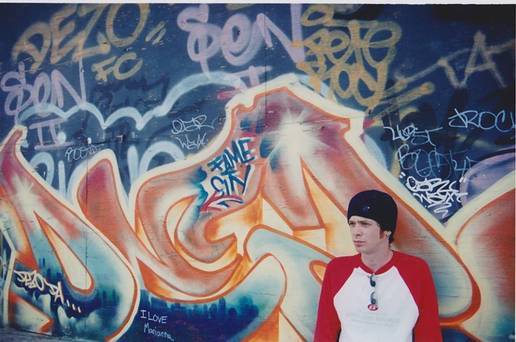 Glen Hansard ponders one of the big questions. “What happens to a spirit,” he wonders, “when it’s so full of life?” It’s something that has haunted him ever since the death of his close friend Mic Christopher, and it will haunt those who watch a forthcoming feature-length documentary on the gifted troubadour who never quite reached his potential.

Heyday: The Mic Christopher Story features heartfelt contributions from Hansard – one of several household-name Irish musicians who talk about the effect the singer from Clondalkin, Dublin, had on their music.

And it’s clear he had a far bigger impact than many might have imagined. Christopher packed a lot into a short life – he died after hitting his head in a fall while on tour in 2001 – and had he lived, he would have been celebrating his 50th birthday this year.

The singer left behind a small but impressive body of work including the emblematic anthem ‘Heyday’ which gives the film its title. And the two albums he made in the 1990s with his band The Mary Janes are ripe for rediscovery. The film was about three years in the making and is a labour of love from producer Níall Carver and director Alan Leonard. It began life as a college radio documentary project for Carver, who managed to establish the trust of the Christopher family. With their backing, this moving documentary emerged. “What I hope this film does is encourages people to investigate the music,” Leonard says.

“He was exceptionally talented and his music really stands up. Listen to the second Mary Janes album, and it’s really superb. He was at the top of his game.”

Christopher signalled his talent at an early age. He was just 15 when he started busking on Grafton Street in 1984, having struck up a rapport with Hansard, who was also honing his craft on the famed Dublin boulevard which had been newly pedestrianised back then.

The film explores their friendship – and it was a powerful one. Clearly, there was a great deal of mutual respect, even if they didn’t see as much of each other in the 1990s as they had in the preceding decade. Both were concentrating on fronting their respective bands, The Frames and The Mary Janes.

If The Frames built up a sizeable fanbase and enjoyed some international success before Hansard hit the big-time – and an Oscar for best song with Once, the musical, and his subsequent solo work, Christopher’s band seemed to be toiling in the margins.

It’s clear that there was a great deal of talent there and they really could have achieved something in the post-grunge landscape of American rock, but Christopher had little interest in playing the game.

“He didn’t want to sell out,” Carver says. “He had that indie mentality of not wanting to compromise his integrity. And ‘Sham’ – the title track of their second album – really illustrates the way he felt about the music industry, about how negative that business could be.”

It’s hard not to look at Heyday and wonder what Christopher might have achieved if he had been more willing to promote himself and his band, à la Bono. Irish music history is littered with individuals and groups who would likely have enjoyed a far greater innings had they been willing to play the game a little.

And, yet, towards the end of his life, Christopher really did go for it. After The Mary Janes disbanded, he was at a very low ebb and it appeared as though he had fallen out of love with music. He took a job as a motorcycle courier and appeared to be destined for those ‘Where are they now?’ newspaper columns.

But it was through adversity that he rekindled his mojo. He was involved in a bad bike crash in the course of his work and was admitted to hospital. The near-death experience roused him to give music another go and to embrace all that was good about life.

That’s when songs like ‘Heyday’ – and the one he was most proud of, ‘Skylarkin’ – came about. Josh Ritter, who got to know Christopher around this time, notes that ‘Heyday’ was a carpe diem song about making the most of your talent and not being cowed by past failings.

“It marked a whole new direction for him,” Leonard says. “Out of adversity, came someone with a zest for life who wanted to make really good music.”

And with a renewed confidence came new opportunities, including a major UK and European tour as support to The Waterboys. Like many of the film’s other talking heads, Waterboys frontman Mike Scott talks about Christopher’s remarkable charisma. Although he had only known him for a short time, he left a lasting impression behind.

And it was on that Waterboys support tour, that tragedy struck. Christopher fell while descending steps in Groningen in the Netherlands and never regained consciousness.

I have lucid memories of the fundraising concert at Vicar Street to help with his medical bills and yet, on the night it took place, doctors were telling Christopher’s family there was nothing more they could do and the life-support machine would have to be switched off.

Close friends like Hansard, Lisa Hannigan and respected backroom music figure Donal Scannell travelled to the Netherlands to be with the singer in his final moments. The film is very affecting when they – as well as Christopher’s parents Vaun and Harry and sister Maureen (who co-produces the film) – talk about how the life simply drained out of this boyish 32-year-old man as soon as the machine was disconnected.

And yet, Christopher’s death seemed to spark a call to action in his friends – a fact noted by his parents. While many of them seemed to be treading water, career-wise, the loss of a precious soul seemed to urge them to ensure their own gifts weren’t squandered.

“It’s definitely the case that things started to happen for his friends afterwards,” Carver says. “And that was something they were keen to tell us when they talked about the impact Mic had had on them. I think it was a case of his death making them realise that, ‘We just don’t know how much time we have left – we can’t squander this gift’.”

It’s uncanny how many of those touched by Christopher went on to have successful careers. Hansard would release two Frames albums before changing tack with Once.

Damien Rice (who does not feature in the film) would release his debut album within months of Christopher’s death – O is dedicated to the singer – and it would become an unexpected indie hit. Hannigan, who was just 19 at the time of his death, would be a key part in Rice’s early years, before launching her own, respected, solo career.

Elsewhere, American tunesmith Josh Ritter would become a leading light of the singer-songwriter scene that was so fundamental to the Irish music scene in the early 2000s. And Christopher’s former girlfriend Sharon Horgan – whom he moved to London with – would find her voice as one of the great TV comedy writers, with the Channel 4 series Catastrophe chief among her achievements.

His friends – including the producer Karl Odlum – worked on songs he had completed following his passing, and an album, Skylarkin, was released the following year. It was well received critically, although it didn’t make quite as big a splash as it could have.

‘Heyday’ managed to find a much larger audience thanks to its use in a then ubiquitous Guinness commercial – the one featuring a pre-fame Michael Fassbender who ‘swims’ across the Atlantic to reconnect with an estranged brother.

Carver believes that had Christopher lived, he would have enjoyed his own success, too. “I’ve no doubt about it,” he says. “He was on the right track. He was writing really uplifting and powerful songs. He saw that he had been given a second chance and he wasn’t going to let it slip away.”

‘Heyday: The Mic Christopher Story’ will have its world premiere at the Galway Film Fleadh on July 13

A Complete Breakdown of the Crawley Family From "Downton Abbey"