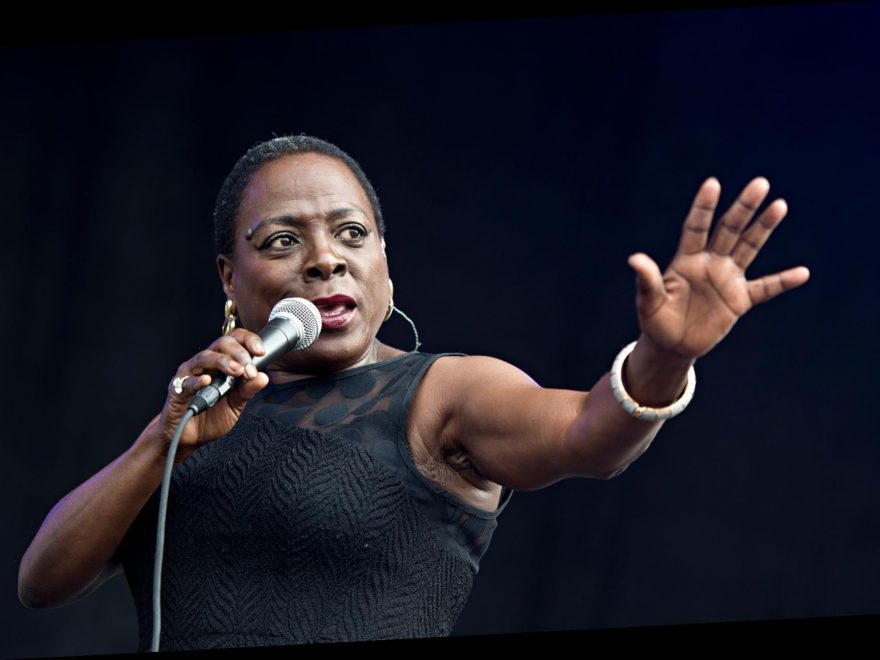 Daptone Records has shared Sharon Jones and the Dap-Kings’ sly interpretation of Stevie Wonder’s “Signed, Sealed, Delivered I’m Yours,” which will be included on an upcoming compilation, Just Dropped In (To See What Condition My Rendition Was In), out October 23rd.

The new set features five never-before-heard covers and a handful of others that were previously released in other formats. The covers include a cross-section of faithful recreations and others — like this take on “Signed, Sealed, Delivered” — that are practically new tracks.

Jones and the Dap-Kings recorded “Signed, Sealed, Delivered” for a TV commercial for a major bank, although their version bears little resemblance to Wonder’s 1970 hit. The upbeat groove has been stretched into something slinky and soulful, while the lyrics are completely different, aside from one nod to the original, when Jones coos the refrain, “But here I am, baby…”

These types of overhauls are a common occurrence in the film, TV and advertising worlds. Licensing an original master recording for a major label can often be expensive, so to skirt those costs, music supervisors will ask artists to recreate a song as closely as possible. Along with this take on “Signed, Sealed, Delivered,” Just Dropped In will feature Jones and the Dap-Kings’ similarly crafted version of Bad Medicine’s instrumental, “Trespasser,” for the American Gangster soundtrack.

Other unique cuts on the compilation include a cover of Gladys Knight’s “Giving Up,” which was requested by a producer who was sure he was going to sample it for a Dr. Dre album but ended up never using it. Similarly, songs like “Rescue Me” and “In the Bush” were recorded for The Wolf of Wall Street soundtrack but never used. And the comp boasts a take on “Just Dropped In (To See What Condition My Condition Was In),” that’s molded more after Bettye Lavette’s 1968 version than Kenny Rogers and the First Edition’s original.

Just Dropped In will include covers that were previously released on tribute projects to artists like Prince, Dusty Springfield, the Marvelettes and Shuggie Otis. There are also covers that Jones and the Dap-Kings recorded on their own volition, including a version of Janet Jackson’s “What Have You Done for Me Lately” from their 2001 debut, Dap-Dippin’, and a cover of Bob Marley’s “It Hurts to be Alone.”