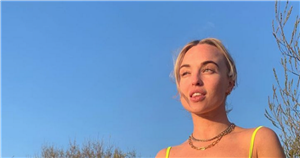 Hollyoaks star Jorgie Porter embraced the British weather on Wednesday as she shared a sizzling hot tub snap to her Instagram followers.

Jorgie, 33, teased her fans as she wore a neon-yellow bikini that showcased her stunning physique.

The bikini knickers highlighted her toned waist as it sported a long ribbon detail that she crossed over her ripped abs. She also added a gold necklace and bracelet to the look.

The star showed off her striking looks while appearing fresh-faced with no makeup. Staring seductively into the distance, Jorgie glowed in the pic as the sun kissed her skin.

Fans of the actress seemed to love the hot tub look too, as they sent her love and adorning comments.

A third stunned follower said: "Well now I can’t remember why I walked in the kitchen…[shocked face emoji]."

On Tuesday the actress spoke openly on her podcast Loose Lips about her views on going out and clubbing and agreed that she has finally "grown out" of going to nightclubs.

Jorgie’s co-host Sharon Carpenter also acknowledged that she no longer has any desire to hit the clubs.

Talking about clubs, the presenter said: "What am I even doing here? There is no one here I want to network with, there are no business deals being made here. I’ve realised I’ve finally grown out of clubbing."

Jorgie agreed and said: "It’s weird because it’s like a revelation that pops in your head isn’t it."

She added: "Why do I want to meet with other people?"

Earlier this month, the blonde beauty shared an adorable pic of her man, Ollie Piotrowski on her Instagram and wrote a cute caption alongside the photo.

Jorge wrote: "Appreciation post !!! I have mad admiration for my fella."

"Lucky to fancy the pants off my best friend."