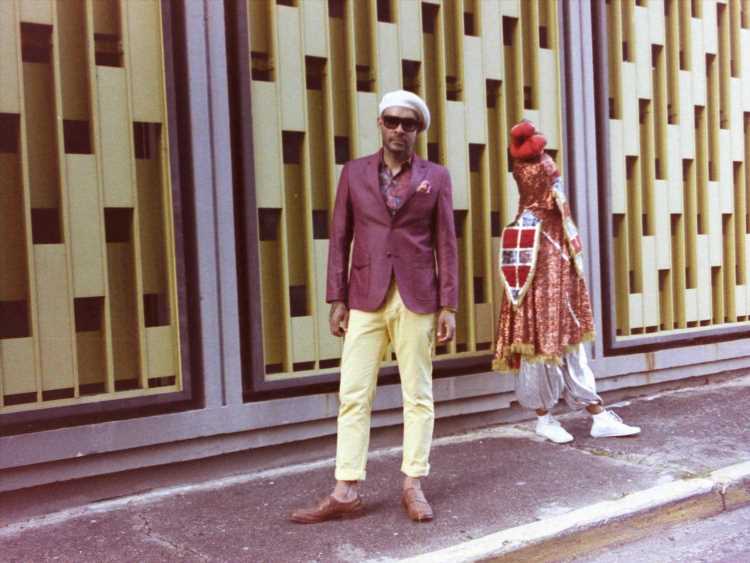 The crux of the Puerto Rico-based group ÌFÉ, says bandleader Otura Mun, is “about bringing people together, and seeing ourselves as people connected.” In their critically-acclaimed 2017 debut, IIII+IIII — pronounced ‘Edgy-Og-Beh’ — Mun combined the traditional praise songs and messages of his spiritual practice with jovial, Afro-Caribbean rhythms and electronic sounds. As a Babalawo, or a priest of divination of the Yoruba religion of Ifá, Mun is now four years into his study and practice.

“I’m clearly recognizing the responsibility I have to be able to represent this practice with dignity,” Mun tells Rolling Stone. “It’s important to me to recognize the commitment that others have made to this before me. And respecting that commitment, this tradition, and trying to do something that’s going to honor those people.”

Many Babalawos and Santeros, some with their godchildren, are often present at live performances. Mun initiated his first godchild last year and now consults followers on a regular basis; that is, when he’s not on the road. The band kicks off their international summer tour June 30th at this year’s Montreal International Jazz Festival; there, they will tease new material from their upcoming album, including singles “The Tearer (Bembe)” and “Voodoo Economics (WolfMan).”

When compared to its more light-filled predecessors, ÌFÉ’s latest material explores the Caribbean’s shadow side. “You can’t have the day without the night, and you can’t win without loss … The Ifá system turns on that,” says Mun. Interspersed with clips from the action series X-Men, the video for “The Tearer (Bembe)” uses the character Storm to represent Oyá, Yoruban goddess of storms and guardian of the cemetery gates, in reference to the destructive force of Hurricane María. Meanwhile, “Voodoo Economics (WolfMan)” is a funeral lament for a friend who was shot and killed in an alleged drug-related shooting in San Juan — an event that left Mun reflecting on the casualties of capitalism, especially in Puerto Rico. “We say in English, ‘Get rich or die trying,’” he tells Rolling Stone. “But I don’t know very many rich people. I know a lot of dead people. And that’s what usually happens: We get locked up or dead. We don’t get rich.”

Originally born in Indiana, Mun studied African percussion at the University of North Texas on a drumline scholarship, before relocating to Puerto Rico in the late Nineties; that’s where he made a name for himself as a DJ in San Juan, collaborating with the likes of Cultura Profética and the now-defunct Ciencia Fixión, which featured members of hip-hop trio Füete Billēte). He’s also worked with dancehall artist Young Ragga, and folk singer Yarimir Cabán, who performs independently as Mima and is part of the ÌFÉ band. Rolling Stone interviewed Mun in person at his Santurce, Puerto Rico home — also his studio and place of spiritual practice — to learn more about ÌFÉ’s next steps.

I’ve always considered you the director of ÌFÉ. Can you explain how your songwriting process works?
I’m pretty clear about what I’m trying to get across message-wise. But it’s purposely built to be played with a group; it wouldn’t be any fun for me to just sing to [a playback] or whatever. It’s meant to be electronic music that’s played live, because that’s how we would really be able to enjoy ourselves. So I’m always building music with the band in mind, and with everyone’s strengths in mind. It’s basically like custom-building a vehicle for them to drive around.

ÌFÉ’s work is not just limited to music anymore — you recently added a dancer, Pia Love, to your live shows.
The music of ÌFÉ is heavily influenced by Cuban rumba, and the music of the Orishas, but also by dancehall and current Afrobeat stuff, like the new electronic music coming out of Nigeria, South Africa, but then also the new stuff coming out of Jamaica. Pia Love is the only other person in the group that listens to those things, and she studied dance in Jamaica, in Nigeria, in Brazil, and now, coming here [to Puerto Rico], I’ve sort of put her to take intensive study in all the Afro-Cuban stuff. With her I’m able to come up with something that’s hybrid, in what she’s doing dance-wise, from everything she’s already studied, which really aligns with where I’m pulling my influences from too.

You’ve released two darker songs ahead of the new record. Is that mood indicative of the album overall?
The arc of this next record that I’m making, deals with the sort of darker energy. And the music itself is more aggressive in its musicianship, like it’s harder to play, a more aggressive construction.

What is taking you to that place right now?
With these two records, I want to try and paint, like, a holistic, a whole, entire version, of the ÌFÉ experience. And you can’t have the day without the night, and you can’t win without loss. All of those things. The Ifá system turns on that. It’s about contraction, expansion — ping-ponging back and forth between these things. I’m thinking about the energies that I didn’t touch on in IIII+IIII, and starting to fill in some of those things. Especially coming off Hurricane María, the first thing that I wanted to talk about was uncontrollable change [with “The Tearer”]: When you push something, and all of a sudden it starts moving, and now you can’t stop it. Let’s see where this ends, you know? And that, right there, is you’re talking about the energy of Oyá, who is an Orisha that we did not touch on [in the previous album]. So it’s trying to run the story arc farther down the line.

I noticed that some of the photos for this album were taken at the Milla de Oro, San Juan’s financial district. It’s also where a lot of protests take place.
We wanted to highlight the financial mess that is Puerto Rico. But then also, go back to the idea of why? Why do we want so badly to be rich? Why are we still under colonial control? How long is that going to last? What does it mean for us?

In exploring themes like colonialism, or drug wars, are you looking for answers, or solutions? What kind of messages do you want listeners to receive with this new album?
If we want to focus on “Voodoo Economics (WolfMan),” I’m anti-capitalist. I don’t believe in stratification, in that sense. I’m the person that, if you pour a bag of rice on the ground, I’m going to take the rice that I need, and I would hope the person takes the rice that they need. Capitalism says the smart person takes all the rice, and then doles it out for money. That’s the wise person. And I just don’t believe that that’s wisdom.

So it’s that: It’s seeing the interconnectedness. And challenging the world around us. It’s a legit question: Why do we want to be so rich? A lot of these questions I was asking myself this at the time I made IIII+IIII, and these are different questions that I’m asking myself, by extension of the people, through the music, this time.