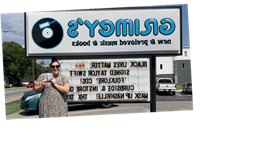 Taylor Swift has pulled off another surprise drop — not quite as momentous a twist as releasing “Folklore” with less than 24 hours’ notice, but one that generated a lot of good will in the independent retail world. The star signed an unknown quantity of CDs of the new album and her record company quietly dispersed them to indie record shops around the country… a move that only became apparent when stores began sharing news of their covetable new stock on social media Thursday morning.

In Minneapolis, a music buyer for local store Electric Fetus told the Star-Tribune just how quickly and furtively it all went down. “We were asked Tuesday night if we were interested — of course, we were — and we were given very few details until Wednesday night,” Jim Novak told the newspaper. “Universal [Music] and Taylor’s management offered to sell us 30 signed CDs at regular price, and they requested we limit online sales to curbside pickup to keep the sales local.”

In Nashville, Grimey’s reported getting an allotment of signed CDs in, too. “Well, there is no doubt about it, #Swifties are SWIFT!” the shop posted on Instagram after the stock sold out less than an hour after going on sale. (That Grimey’s was included is not surprising, since Swift had made a donation to her hometown record store back in April to keep full-time staffers paid and on health care while the shop was closed due to the pandemic lockdown.)

The Zia Records chain in the Southwest tweeted: “Yeah, @taylorswift13 had 𝘢𝘭𝘳𝘦𝘢𝘥𝘺 set the bar high for record store support by helping our friends at @Grimeys, but her choice to support independent shops like Zia is so cool — for us, for artists, and most importantly, for fans.”

A representative for the Bull Moose chain in the Northeast told Rolling Stone that it got copies in at nine out of 12 stores and sold through all of them within two hours of opening. “Phones rang off the hook in every store,” said the rep. “Folks took road trips to try to get one. It was a huge deal.”

But Bull Moose wasn’t happy to see some of those copies immediately going up for resale. In a tweet, the chain wrote, “Open Letter to anyone reselling a signed copy on eBay: You suck and are the reason very cool programs like this don’t happen as often as they used to. Next time at least take our price sticker off your listing.”

Unlike most stores which limited sales to immediate foot traffic, Newbury Comics in Boston sold copies online, one per customer, but kept it local by promising buyers instructions on how to come into the store over the weekend to pick up their CDs, saying none would be mailed.

The stores that received the limited stock were said to have paid normal wholesale price for the discs and from all indications, sold them at normal retail price.