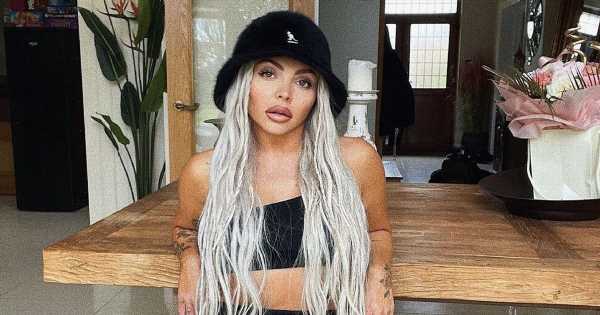 Jesy Nelson sent pulses racing in her latest Instagram post, clad in a black crop top that showed off her toned midriff and ensured all eyes on her.

The star paired the tiny top with some graphic printed sweatpants, and a matching black hat.

She showed off her recent hair transformation, with her waist-long platinum blonde locks left down and waved, with braids in the front.

Jesy relaxed against her dining table as she stared at the camera in a full face of glam makeup with her signature pout stealing the show.

Captioning the stunning pic, the singer wrote: “Soz about the mess but I was feeling my attire”.

Her legion of followers rushed to the comments section to heap praise on the star.

“You are so beautiful and amazing,” commented another.

A third wrote: “I’m still obsessed with your hair”.

Patrick Patrikios who Jesy has been working with in the studio, chimed in to say: “Swag I taught u wellll”.

Jesy announced last week that she had just signed a smash record deal with Polydor Records and Universal Music Group.

She wrote: “So excited to announce that I've signed my first ever solo record deal with Polydor Records and Universal Music Group.

Signing off the post with a monkey-face emoji and love heart, she penned: "This is such a pinch me moment. I cannot wait for you guys to hear what I've been working on".

The star devastated fans when she revealed she was leaving Little Mix last year.

At the time, she explained it was due to the fact that her mental health has suffered as a result of being in the girl band and she has now embarked on a solo career.