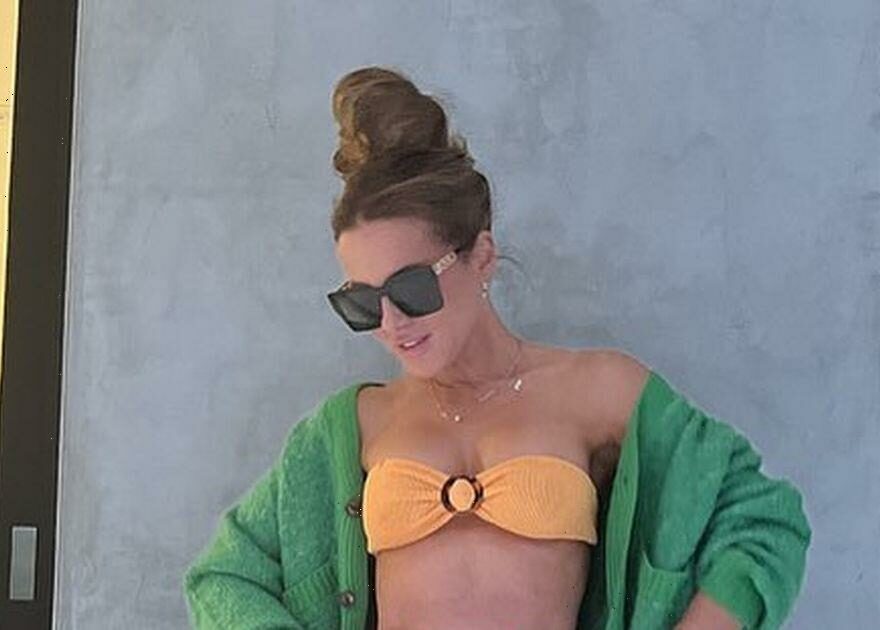 Kate Beckinsale looked sensational as she posed in a bikini for a sizzling snap posted on her Instagram earlier today (August 14).

The actress 49, paraded her never-ending toned pins in a pair of tiny white bottoms, accentuated with a pair of nude platform heels.

The Pearl Harbour star donned a strapless orange bikini top, giving fans a glimpse of her cleavage and tiny waist.

She teamed the skimpy outfit with a green cardigan that sat just off her shoulders and sported a pair of oversized black sunglasses.

Posing with her hands on her hip, the English beauty gazed to the floor while she swept her tresses into a stylish bun.

In view of her 5.4 million followers, Kate wrote alongside the snap: "He'll never find me here."

Fans couldn't get enough of the jaw-dropping display and rushed to the comments to inundate her with adoring messages.

One fan wrote: "You're a goddess Kate."

Another gushed: "Wow I had to sit down," as a third added: "My dream girl."

"Legs for days damn," echoed another while a sixth commented: "You are so damn fine."

The Hollywood megastar recently revealed she will be returning to London's West End in 2023.

She spoke to Daily Star Sunday about her upcoming venture, saying: "I’m doing a play in London next year. Doing a play is hard work and that’s the aspect one is concerned about.

“I will be nervous. And I don’t drink or do drugs, so I’ll be absolutely f***ed! It’ll just be raw terror.

“But it will be really nice. It’s important when you do movies a lot to do things that have an actual audience because it’s such a magical relationship, especially if it’s a comedy.”

The Aviator actress put her West End career on the backburner for years in order to focus on being a mum.

She added: “For years I liked to put my daughter to bed at night. But she doesn’t want me to do that now because she’s 23. So I can do a play.”

Kate shares daughter Lily with actor Michael Sheen, whom she dated from 1995 to 2003.