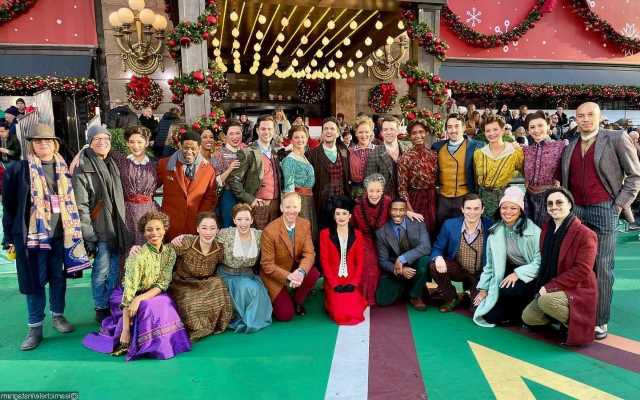 The ‘Glee’ alum dresses in her costume from the Broadway musical to kick off the annual parade with ‘Don’t Rain on My Parade’ while being joined by her co-stars.

AceShowbiz –Lea Michele didn’t let head cold stop her from joining the Macy’s Thanksgiving Day Parade. The actress opened the holiday broadcast on Thursday morning, November 24 with a performance of “Don’t Rain on My Parade” from “Funny Girl”, the Broadway production she’s currently starring in.

Ahead of the performance, Lea shared on her Instagram Story that she was in her dressing room at 5 A.M. after doing two “Funny Girl” shows the day before. She said she was excited for the parade despite dealing with a “wonderful” head cold. “We’re so excited. Today’s gonna be amazing. I can’t wait,” she said.

Bringing the Broadway musical to the streets, the 36-year-old dressed in her costume from the show. She was first joined by her fellow cast members as they made their way through the streets of New York City while she belted the tune.

After passing through various band members and floats, Lea delivered a high note and then appeared before Macy’s Herald Square store, where she continued the song with a playful lyric change. She aptly altered the line “Hey, Mr. Arnstein, here I am” to “Hey, Mr. Macy’s, here I am.”

From there, “Today” hosts Savannah Guthrie and Hoda Kotb stepped in to carry the three-hour broadcast.

Lea’s performance was met with loud cheers from audience members in attendance as social media users also sang praise. “Having Lea Michele open the #MacysThanksgivingDayParade was PERFECT,” one viewer reacted to the opening performance. Another gushed, “Lea Michele is stupid talented.”

Besides the “Funny Girl” cast, the 96th annual Macy’s Thanksgiving Day Parade featured “The Lion King” cast who wowed viewers with “Circle of Life” and some numbers from “Some Like It Hot”, “A Beautiful Noise” and “Aladdin”. Mariah Carey, meanwhile, brought her twins Monroe and Moroccan during her performance of “All I Want for Christmas”.