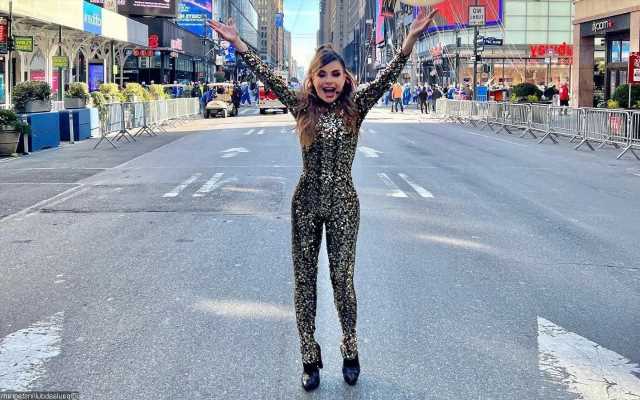 The former ‘American Idol’ judge is roasted by social media users after she performs ‘Straight Up’ and does a tap dance on the Jennie-O Turkey Store float during the annual parade.

AceShowbiz –Paula Abdul was roasted following her appearance at the 2022 Macy’s Thanksgiving Day Parade. Taking the spotlight by joining the Jennie-O Big Turkey Spectacular Float, the singer/dancer hyped up the show with her performance of “Straight Up”.

Clad in a sequin jumpsuit, the 60-year-old did a tap dance while lip-syncing her 1988 hit song during her energetic set. She was joined by backup dancers to execute a dance routine that ended with an assisted clip.

Among the audience in attendance was Flavor Flav, who was having the time of his life watching Paula’s performance. As the camera turned to the audience, he was seen standing on his feet and waving a pink pom-pom to cheer the former “American Idol” judge.

Not all, however, were as excited as Flavor to watch Paula’s performance. One person criticized it, calling it a “budget performance.” Another mocked her, “I didn’t realize there was a big head filter.”

Some others were disappointed to learn that the tap dance sound seemed to be pre-recorded. “Seriously? Tap-synching now?” one Twitter user reacted, while another echoed the sentiment, “She’s faking everything about this.”

There were still some fans who defended Paula though. Begging to differ with the critics, someone posted on Twitter, “I’m sorry but Paula Abdul just delivered one of the greatest parade performances of all time. Starting with a tap break on the Jennie-O float?!? C’mon now!”

Others clapped back at the naysayers, with one claiming, “The most hilarious thing about these trolls hating on 60 year-old Paula Abdul – who still has dancing chops – is that all of them are both untalented and unaccomplished. Have SEVERAL seats! She’s an icon.”

“Right ? People on Twitter hating on Paula Abdul, she’s just out there living her best life,” another agreed. Someone else tweeted in support of Paula, “Go Paula! I Loved it! All those complaining wish they could dance like that at any age!”

Meanwhile, Paula was grateful for the opportunity to join the annual celebration. “This was a DREAM COME TRUE!” she posted on Instagram after her performance. “Thank you @jennieo & @hormelfoods for having me ride on your beautiful float, @macys for having me perform at your iconic parade, and my entire team for making this happen! I hope everyone has a healthy and happy Thanksgiving.”

“What a day!!!” she went on gushing, before informing fans how they can catch the show if they missed the live broadcast. “If you missed the parade, it will be repeating today and tonight on NBC or you can stream it on the Peacock app!”