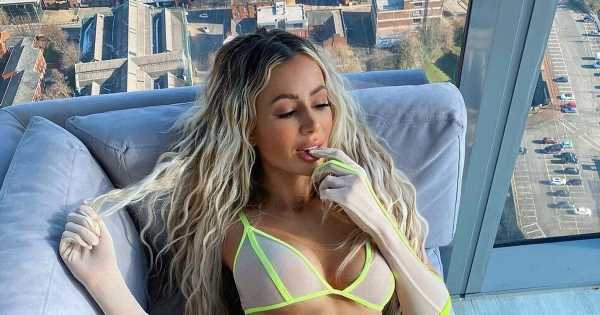 Love Island contestants are always plunged into the forefront of our TV screens, but there have been many times where contestants have come onto the show and we're sure we've seen them before…

We've seen many contestants strut through the Love Island villa in their swimwear, and over the years, we've even been sure that we have seen them twice! Some of our favourite Islanders certainly managed to get through the casting process once or twice.

From A-listers to fellow reality stars, there has been a fair share of twinning among the Love Island cast.

So who are our favourite lookalikes?

Fans of the show were gobsmacked when Laura Anderson popped up on their screens, as the resemblance to fan-favourite from the year before Olivia Attwood was uncanny.

From the long blonde hair, messy bun and specs to getting dolled-up, Laura looked like the spitting image of Olivia.

The likeness between the two has reportedly caused some tension in the past, with a source telling The Sun that Olivia felt like Laura was "copying her".

They said: "Olivia can't stand Laura. She is fed up with her as she feels she is copying her and trying to be her.

"She was annoyed because at the Specsavers awards, Laura was getting on really well with Amber and the other Love Island girls from Olivia's year.

"She got jealous and has refused to have anything else to do with her."

Luke M introduced himself as someone who looks like Justin Bieber, and if he hadn't, viewers certainly would have.

The Love Island lad from the winter series looked unusually like the US singer, but that didn't make his quest for love any easier as he tried to find the one.

Luke eventually left the villa with Demi Jones, but they soon broke up after their exit, and Luke began dating Lucie Donlan from the 2019 series.

The pair seem very loved up as they regularly shared cosy snaps with each other, with a lot of them taken on the beach.

Meanwhile, Justin has also found himself a blonde bombshell, as he has been married to model Hailey Baldwin since 2018 in a very lavish wedding.

He and his other half also appear to be fans of sharing romantic snaps with their fans, as Justin regularly pays tribute to actor Stephen Baldwin's daughter.

Amber was another Islander from the 2017 series who appeared to have a twin, with viewers baffled from the minute the line-up was announced.

Just a year before, Kady McDermott had entered the show and made it all the way through to the final, eventually coming third place with Scott Thomas.

Meanwhile, Amber fared much better as she managed to win the £50,000 prize after pairing up with Kem Cetinay, although the pair called it a day only a few months later.

Kady made it clear she wasn't keen on the comparisons, saying at the time: "Lots of people have been comparing me to Amber on the show, but I understand it because you’re always going to be compared to others.

"I think people think she’s like me because she’s friendly, I’m friendly, and she’s a little brunette as well. The only thing I was upset with was that they took my nickname, they just could have given her another nickname really! But pocket rockets are the best."

Later, she took another brutal dig as she claimed Kem and Amber weren't going to last, posting on social media: "Can people stop comparing Amber and Kem to mine and Scott’s relationship. They won’t last five minutes."

Amber later reportedly blocked Kady on social media, and their bitter feud raged on for months, with the pair calling it quits before Kady's ex Scott reportedly spent the night with Amber.

When Love Island welcomed the tattooed fire fighter that is Michael Griffiths, viewers were adamant that he was actually Callum Izzard from Ibiza Weekender.

In fact, viewers were so sure that it was a mistake that they were forced to Google it to double check.

Comments regarding their "identical" resemblance was made throughout the series, with both men sporting tattoos and even matching nose piercings.

Callum even got together with one of the islanders, although not from Michael's series, as he got engaged to feisty Georgia Steel, with the pair even getting engaged after only a month of dating.

However, their brief romance sadly came to an end in 2020, a year after they got together, and they're set to face off with each other on the 2021 series of Ex on the Beach.

Molly Mae definitely made an entrance when she stepped foot in the villa, and although opinions were divided on her, one thing that viewers could agree on were the similarities between her and Pia Mia.

The similarities were coming out at the start of the series, with one user tweeting: "Pia Mia and Molly Mae are long lost sisters", but it has also continued post-Love Island.

Molly Mae was a part of the 2019 series, the last summer series to air of Love Island prior to the 2021 return.

She was one of the few of the series to find love, as she quickly settled down with boxer Tommy Fury, the younger brother of pro Tyson.

The pair are still together now, and share a lavish flat in Manchester.

Sam Bird and X Factor star Matt Terry gained so much attention dude to their similarities, with fans adamant that they were secretly related.

Some viewers even labelled the resemblance as "creepy" and referred to them as "long lost twins".

Fans were so sure that they could be the same person that singer Matt was forced to take to social media and tell everyone that it wasn't him in the villa.

Sam went on to couple up with Georgia Steel, but it wasn't to be as they soon split after leaving the series, resulting in an almighty row during the Christmas special.

However, both Matt and Sam were not going to tell their uncanny likeness go, as on January 2019, the pair were seen together at Dancing On Ice.

Matt later shared a snap of them and captioned it "long lost brothers?"

Shaughna is possibly one of the few Love Islanders who not only looked similar to a previous contestant but also shared many personality traits.

Many people quickly recognised that Shaughna looked like 2018 winner Dani Dyer, who paired up with pen salesman Jack Fincham, but as we saw more and more of her, the beauty started to remind fans of Dani too.

With her iconic quips and sassy exterior, Shaughna quickly became a series favourite, but sadly left the villa prior to the final as a proud, single woman, as she was brutally dumped by Callum Jones in one of the show's most awkward moments ever.

Despite his promises, scaffolder Callum quickly coupled up with someone else, pairing up with Molly Smith after meeting her in Casa Amor.

Love Island will be returning on June 28 at 9pm on ITV2.