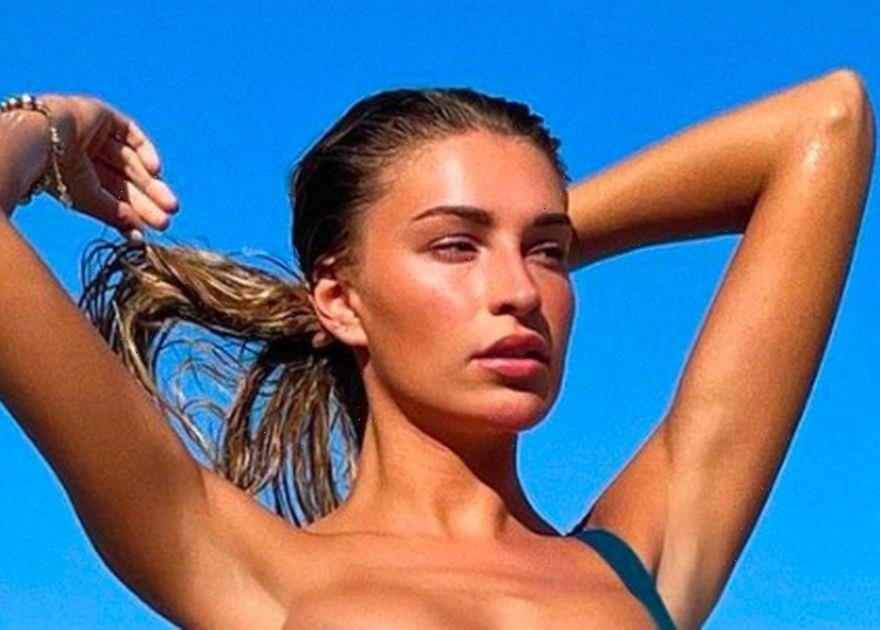 TV stunner Zara McDermott left little to the imagination in a cut-out swimsuit as she shared some sexy poolside pics from her luxury Greek getaway.

The racy pictures also showed off the 24-year-old’s golden tan as she pulled her hair back off her face and gazed off to the left of the camera, making sure all eyes were on her enviable physique.

The star is currently dating Made in Chelsea star Sam Thompson, who was photographed giving a red rose to a mystery brunette beauty while on a lads night out in London with pal Pete Wicks on Saturday.

Sam's boys' night out began at 9pm in the exclusive Mayfair district of London, where they dined out at Latin American restaurant Amazonico on Saturday.

Stunning star Zara appeared unfazed by the recent revelation, as she slipped into the skimpy swimsuit and struck a pose for her 1.5million followers.

Sam, 28, was seen showering a brunette beauty and her pals with attention as they chatted in the smoking area.

TOWIE's Pete, 32, repeatedly hugged and kissed two of the girls, according to onlookers, before the group of five took a taxi to Raffles in Chelsea.

Zara must have been on 28-year-old Sam's mind as he left the private members' club alone while his pal continued the party at a nearby strip club.

It comes after the former Celebrity Big Brother housemate called Zara the “girl of his dreams” and revealed he wants a baby with her in the near future.

Sam said: "I've hit a stage where I'm doing my house up at the moment, I want to make it into a really nice adult home, I'm nearly 30 and I'm with the girl of my dreams.

"Not in the next year… but not in the too distant future. I don't want to be a really old dad. But I do need to grow up a little bit first."

The couple’s relationship has been a rocky one, after Zara confessed last year to being unfaithful, though Sam revealed that Zara cheating on him had actually brought them "closer together".