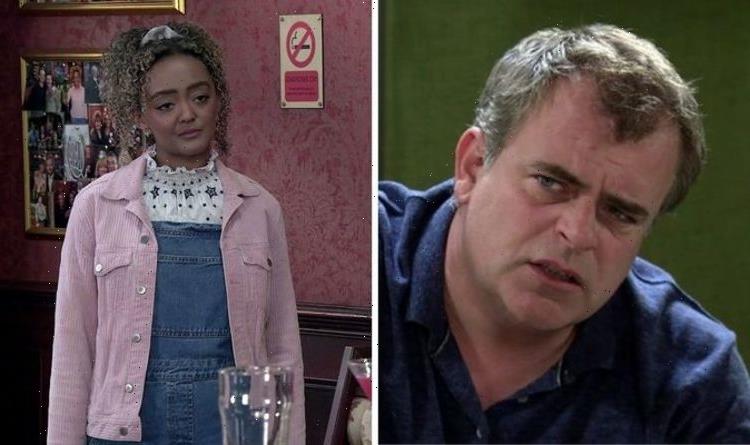 Emma Brooker (played by Alexandra Mardell) was devastated when she learned that her new boyfriend Curtis Delamere (Sam Retford) has an incurable heart condition which means he could suffer a fatal episode at any moment. But wanting to cherish what time they could have together, the Coronation Street couple decided not to let Curtis’ health condition stand in the way of their love. However, on Monday’s episode of the ITV soap, Emma struggled to keep a brave face after Curtis failed to show up for a date. The worried barmaid assumed something terrible had happened, but a troubled Curtis was drinking at the pub. Struggling to cope with such a huge burden, could Emma decide to leave the Street?

Emma and Curtis had their relationship tested very early on after Curtis revealed the truth to Emma about his health.

The unknown illness means he may be live a long and healthy life, but his heart could also fail with no warning.

Despite the heavy news, Emma has kept a brave face on because she loves Curtis.

But with the pressure getting to her, it seems likely she might soon take drastic action, which will leave her dad Steve (Simon Gregson) as well as Curtis, devastated.

Monday’s instalment saw Emma losing her patience with Curtis after he found him drinking in the pub in the morning.

“I’ve been worried sick about you,” she told him. “I thought something had happened.”

An intoxicated Curtis replied: “I sent you a text, oh, I forgot to press send.”

When Emma asked Curtis what he’s playing at, he responded: “Isn’t it obvious? I’m getting drunk.”

“You’ve been missing all morning, what is wrong with you?” she snapped.

Curtis admitted: “That’s the thing Emma, isn’t it? No one knows.”

“I don’t think I can do this anymore,” Emma said, before storming out.

The couple managed to talk it through and Curtis apologised, and they ended up moving in together.

But it doesn’t seem that this is the end of their troubles, as Emma star Alexandra explained: “Curtis is Emma’s Prince Charming, so she’s made the decision to keep going in the hope that love will conquer all.

“Emma and Curtis are perfect for each other – he’s calm, intelligent and charming, and he even gets on with her dad!

“Whereas Emma is very ditzy and all over the place, so they balance each other out.

“He’s exactly what Emma would have imagined in her fairy tale.”

Speaking to Inside Soap, the actress continued: “Emma’s been putting on a show because she initially told Curtis that she could deal with this.

“In front of him she wants to be as strong as possible so she can support him, but inside, she’s distraught.

“Emma wants a man who can look after her, but in truth, she’ll always be looking after him. It’s just too much for her to cope with.”

Talking about the couple’s future, Alexandra admitted things might get worse for them.

“It’s fair to say that Emma’s not necessarily been lucky in love this time around either,” she revealed.

“This situation is going to get really, really complicated for both her and Curtis.

“Emma is really compassionate and empathetic, but this is going to test her much more than she ever anticipated.”

With the pressure to stay positive proving too much for a love-struck Emma who’s heartbroken by her boyfriend’s struggle, Emma could flee the cobbles to sort out her feelings.

Steve would be heartbroken, as Emma has been very supportive of her dad since he lost Oliver.

He also feels protective of his children and was glad to see Emma finally in a strong relationship.

But if she doesn’t confide in anyone, the constant concern is likely to become too much for Emma to take.

Will she desert Curtis and Steve while she tries to figure out what she wants, or will someone be able to stop her from leaving?

Coronation Street continues on Wednesday at 7.30pm on ITV.