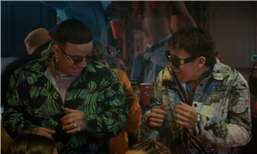 Over the last several years, rising Puerto Rican artist Eix has built out his sound and attracted new fans through his enthusiastic live performances and notable collaborations with the likes of Kiko El Crazy, Rauw Alejandro, De La Ghetto, Guaynaa and others. For his latest track “Cuando Te Veo,” produced by the Dominican multi-hyphenate Maffio, Eix taps the smooth-voiced Colombian-born, Venezuelan-raised artist Beéle for a few verses that keep the song sweet, summery, and super melodic.

In the video directed by Rodrigo Rodriguez, Eix and Beéle dance it up at a house party while delivering a few romantic lyrics to the girls around them, celebrating the promise of young love. The track is tender and offers a new side of Eix, whose serious, socially conscious “Cuernú” — which touched on toxic relationships and violence against women, an ongoing problem in Puerto Rico and other parts of Latin America — garnered him attention.

“Cuando Te Veo” lets Eix and Beéle turn the charm on, and Eix tells Rolling Stone he sees the track as a big leap for him artistically. “From the song to the video, [‘Cuando Te Veo’] means so much in my career and for me personally,” he tells Rolling Stone. He points to one line in the song that says, “Sin ti, soy un campeón sin trofeo” — “Without you, I’m like a champion without a trophy.” He adds: “A lot of people are going to dedicate that line to someone, dance to it, and have fun to it.”