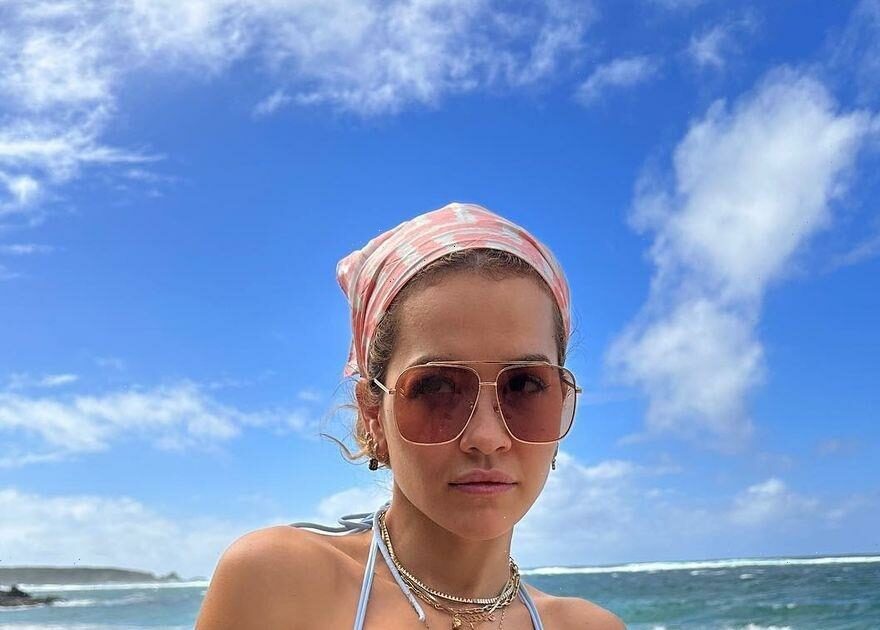 Rita Ora looked nothing short of sensational as she paraded her incredible figure in a tiny bikini.

The singer, 32, put on a jaw-dropping display as she stripped to a tiny blue bikini to which she teamed with a sheer midi skirt.

Held together with a piece of string, the skimpy beach ensemble highlighted her gym-honed physique, with her washboard abs taking centre stage.

Posing up a storm in an exotic location, the blonde beauty looked stunning as she took a stroll across the beach.

She added a touch of glam to her look with several gold chunky bangles as well as several necklaces.

The Fifty Shades of Grey actress swept her trademark locks into a bun which she covered with a pink bandana.

Accentuating her natural beauty, Rita opted for a light palette of makeup all while shielding her eyes from the sun with a pair of oversized sunglasses.

The sizzling gallery of snaps come just before the Hot Right Now songstress returns to The Masked Singer judging panel for its fourth series.

The ITV reality singing competition will see 13 celebrities sing their hearts out while dressed in elaborate disguises.

Rita will be joined by fellow returning judges Jonathan Ross, Mo Gilligan and Davina McCall while I'm A Celeb star Joel Dommett will resume his post as the show's presenter.

Kicking off on New Year's Day, the competition will also feature the first celebrity duo under the guise of Cat and Mouse.

Speaking about the first duo on the show, Jonathan explained: "So it makes it a bit harder to guess because the clues could be about one of them or both of them, you know what I mean?

"So it feels like a different element and it means that they can do different things on stage together as well. So you have a different kind of comic dynamic going on there."

For more of the latest showbiz and TV news from the Daily Star, make sure you sign up to one of our newsletters here .