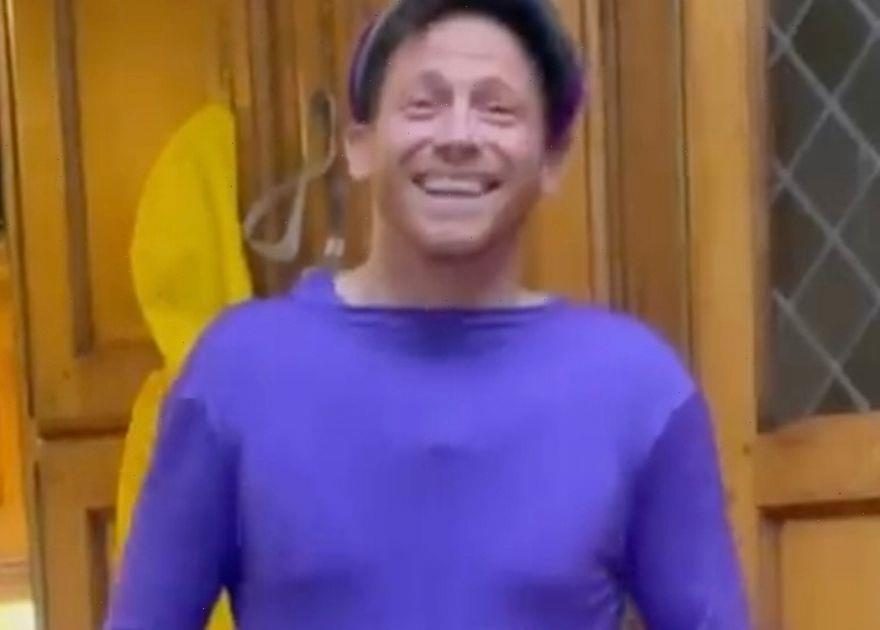 Stacey Solomon was forced to step in and cover fiancé Joe Swash’s crotch area while he was dressed in a skintight lycra costume for their son's birthday party.

Joe, 39, went to the bash, to celebrate baby Rex turning two years old, dressed as a creature from the Disney film Moana.

But the form-fitting outfit did not leave much to the imagination in the crotch area.

Looking a bit sheepish, former soap star Joe could be seen posing with a coconut over his privates to hide his modesty.

Stacey, 31, took to her Instagram stories to document the hilarious scenario.

She said: "Trying to make Joe a shiny Tamatoa Crab costume for Rex's birthday and it's not looking very appropriate for a toddler's party," Stacey joked.

"Oh my god, just tuck it away, why is it there?" she could be heard shouting while her other sons Zachary, 13, and Leighton, nine, laughed in the background while Joe frantically tried to cover his manhood.

"Just move it!" Stacey shouted as Joe replied: "And where am I supposed to put it? It's my penis!"

She captioned the coconut image: "Send help. I'm trying so so hard but I don't know if it’s my costume or Joe but I'm crying actual tears.

"Maybe his shiny shell and claws will help bring it together.

"I have no more energy left for this bloody costume. I've been trying to sew on these arms in the right place for 2 hours but my model is a job's worth."

Stacey and their blended family recently moved into a massive new farmhouse in her native Essex.

She has been regaling fans with her DIY and interior design plans, including a mega chintzy loo.

The £1.2million property includes a vast conservatory, a life-sized Wendy house and even an outdoor pool for them to enjoy when the weather warms up.

Stacey has already called it her “forever home”.

The Loose Women star has also given her new pad a cute name, too.

Her youngest son’s nickname is “Pickle” – so she has called her house Pickle Cottage.

She gushed previously: "Never in a million years did we ever think this would be. We feel so lucky and are so grateful to have found this hidden treasure closer to our family and further out."