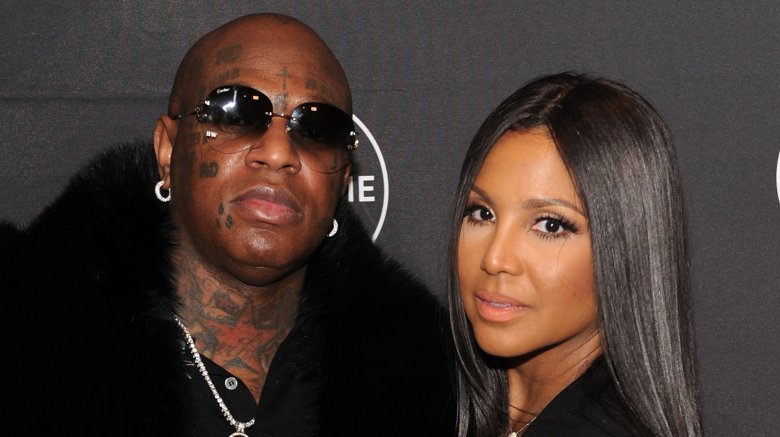 The music world was bewildered when rumors emerged that R&B singer Toni Braxton was dating Cash Money Records mogul Brian “Birdman” Williams. Braxton and Birdman had reportedly “hooked up” a few times in the past before TMZ blew the lid off of their romance in a May 2016 article. “Our sources say they’re trying to keep it on the DL, and up until now they have,” the gossip rag reported.

After Braxton brought her rapper beau on stage during a June 2016 concert, they made their official red carpet debut that same month at the BET Awards. Since then, Birdman has reportedly spoiled her with lavish gifts — even splurging on a $250,000 Bentley SUV in August 2016, but he took things to the next level when he popped the question in February 2018 with a massive engagement ring. Bling bling!

They say opposites attract, but this secretive romance is a head-scratcher. The “Un-Break My Heart” songstress is known as an R&B legend and total sweetheart, while Birdman has a less than stellar reputation in the industry. The duo has also been plagued by breakup rumors, and Birdman may have tried to rush to the altar via a drive-thru wedding. Oh, and about that wedding, it may or may not even happen! Here are all the seemingly strange things about Toni Braxton and Birdman’s relationship.

Toni Braxton and Birdman go way back. They first teamed up in 2002 for Birdman’s song, “Baby You Can Do It.” In the music video, the rapper — in his oversized, aughties-appropriate attire — raps about “hoodrats” and “full-length leathers” as Braxton coos her way through the chorus, draped in various teeny-tiny outfits. The chemistry between the two of them is off the charts, but at the time the video was filmed, Braxton was a newlywed. She wed Mint Condition group member Keri Lewis (pictured, right) in 2001, and they welcomed their first child, Denim Cole Braxton Lewis, in December 2001.

Was there really something there in that steamy Birdman video? It sure sounds like it because while chatting with Braxton’s sister, Towanda Braxton, during an episode of Braxton Family Values (via E! News), Birdman let the cat out of the bag. “I’ve been in love with [Toni] for 20 years,” he says. That would mean he fell in love with her while she was married to someone else, but at least he patiently waited in the wings until Braxton’s divorce was finalized in 2013.

Did Birdman and Braxton fake their own breakup?

At the top of 2019, we went from waiting for Toni Braxton and Birdman to tie the knot to trying to figure out if they were still together. According to E! News, Birdman posted the words “it’s over” on his Instagram Story on Jan. 1, 2019. Braxton deleted photos from her Instagram feed, before posting a picture of herself wearing a beautiful red ball gown and a caption that read, in part: “Starting a new chapter isn’t always an easy choice, but ALWAYS choose to be chosen.” Um, that sounds like breakup talk to us!

Months later, Birdman appeared on The Wendy Williams Show and was asked about the apparent hiccup in his relationship. The music exec claimed the breakup was fake. “I don’t know how this s**t took place, but for real, I would never be a man to bring none of my business to social media,” he said. Braxton played clueless, as well, during an interview with Entertainment Tonight. “We don’t know what happened,” she said. “It just kind of [came out of nowhere]. Someone said it and we were like, ‘OK, we’ll just ride with it because it’ll give us some privacy. So that’s good. But we’re good.”

I now pronounce you husband and wife. Do you want fries with that?

After Birdman proposed in February 2018, we assumed the couple would dive feet first into wedding planning. At least, that seemed to be what Birdman wanted to happen. Toni Braxton told  E!’s Daily Pop that her husband-to-be told her to pick a wedding date pronto because he wanted them to get married before the end of 2018. The rapper and hip-hop mogul suggested they tie the knot in California, and he threw it out there that they could get married in a drive-thru wedding chapel. Braxton’s response: “I’m like, ‘What are we gonna order, fries?’ No.”

Needless to say, as 2018 drew to a close, Braxton continued to push back their wedding date. During an episode of Braxton Family Values, she blamed the delay on her hectic schedule. “You’re supposed to set a date and stick to it,” she said. “But unfortunately in our business, it can be challenging sometimes.”

Wait a minute. So two super successful entertainers can’t hire a wedding planner to do all the heavy work and plan their special day for them? Sorry, but Braxton’s excuse sounds a little strange to us.

Toni Braxton kept mum on some big news until her February 2018 appearance on Loose Women. When the show’s host asked if congratulations were in order, the singer coyly confirmed her engagement to Birdman by flashing her bling. Woohoo! However, about nine months after he popped the question, Braxton sent out a frantic tweet directed at Delta Airlines. It read, in part, “I left my [Louis Vuitton] train case on my flight from JFK to LAX on Tuesday. It’s been impossible to get any type of assistance from anyone in the company!” Inside of her train case was a bunch of the singer’s jewelry, and her yellow diamond engagement ring worth an estimated $5 million dollars, reported E! News.

The following day, Braxton tweeted some good news and bad news. The good news: Her train case was located! The bad news: Most of her jewelry, including her engagement ring, were still missing. According to TMZ, Braxton took the ring off during her flight due to her fingers swelling — a consequence of her lupus diagnosis. Fortunately, Birdman wasn’t too upset that the token of his affection was missing in action. He told talk show host Wendy Williams, “We’ll buy another one. Ain’t no big deal.”

Ain’t no big deal? On a $5 million dollar ring? Bizarre.

Toni talked about eloping, cold feet, and other red flags

During a discussion with her sister, Trina Braxton, on an April 2019 episode of Braxton Family Values (via Entertainment Tonight), Toni Braxton let it spill that there was trouble in paradise and expressed regret about not taking her relationship with Birdman to the next level. “We probably just should have eloped a long time ago,” Toni tells her sister. Trina responds with, “You think you would’ve been happier?” To which Toni replies, “We would probably still be together.” McScuse me? Was this yet another breakup?

Trina didn’t push for more information, but we wish she would have because this strange and secretive relationship has us all kinds of confused. Are they together? Are they getting married? What’s the deal? During that same episode, Toni explains that she and Birdman, whom she affectionately refers to as “B,” are feeling similarly. “Maybe I’m getting cold feet. Maybe we both have cold feet,” she says. “I don’t know. I don’t know what it is!”

Maybe it’s her intuition trying to knock some sense into her? Just a guess.

Toni Braxton makes a living showcasing her amazing voice, but she’s also found success in the world of reality television. She and her sisters — Traci Braxton, Tamar Braxton, Trina Braxton, and Towanda Braxton — and their mom, Evelyn Braxton, star on WE tv’s Braxton Family Values. With six seasons to date, the show is clearly a success.

Birdman has made a few appearances on his honey’s reality series, but he’s not the type of guy to put his business all out there for public consumption. During a chat with Hollywood Life, he said, “I stay off the media business! My personal life — I don’t believe everybody should have exposure to that. I’ve never been that kind of man and I never will.” When asked if he would grace our television screens in the near future, he answered, “No!” Does anybody else find it strange that he’s verse to the spotlight but in a relationship with a reality TV star?

Braxton is ready for her 'gangster' to show his 'gentle side'

Toni Braxton is well aware that she and Birdman are complete opposites. “We’re peanut butter and jelly,” she said on an episode of Braxton Family Values. “We’re completely different but we go together. We balance each other out.” One thing the singer wishes her guy would do? Adjust the way he comes across to others. She said she wants him to show his “softer side,” but that doesn’t look like it will be happening any time soon.

During an episode of BVF, Toni’s sister, Traci Braxton, told Toni and Birdman, “Aww, y’all so cute.” And that really set Birdman off. “I’m still a gangster!” he insisted. Traci attempted to explain why it’s okay for Birdman to be “soft” when he’s with the woman he loves, but he wasn’t having it. “So, to be with the woman I love, I have to put my guard down? No,” he said. Toni goes on to explain that Birdman “doesn’t like people knowing about him,” but says she’s attempting to get him to “change the narrative because people don’t know the gentle side.” Birdman was super defensive, but can you blame him? It’s arguably strange to expect someone to change the fundamental elements of their lifestyle.

Even Toni Braxton's family is confused

We’re not the only ones completely bewildered by Toni Braxton and Birdman’s strange relationship. During an episode of Braxton Family Values, sister Towanda Braxton describes the romance as a “mystery. It’s like the abyss.”

After facing numerous ups and downs and rumored breakups, Birdman threw the Braxton family for a loop by surprising Toni on stage during one of her concerts. Toni was happy to see him and greeted him with a humongous hug, but her sisters were still perplexed. “You know, watching Birdman surprise Toni, I’m just like, ‘Huh?’ I don’t know,” Trina Braxton said during the episode. “Is there a wedding? Is there not a wedding? Are you engaged? Are you not engaged?”

We wish Toni and Birdman nothing but happiness, whether they get married or not. However, if her own family members are puzzled by this entire romance, that can’t be a good sign!