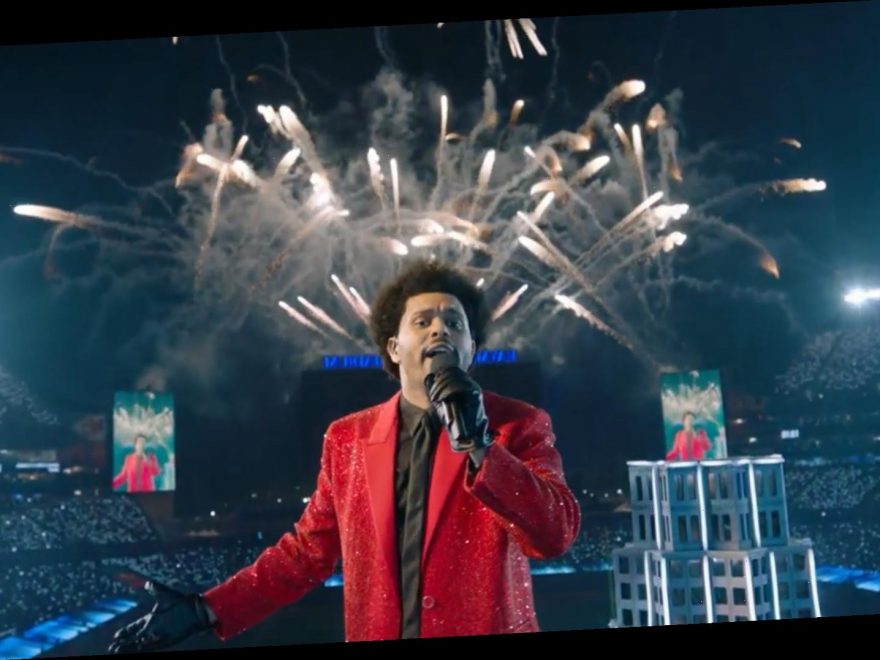 The R&B singer turned pop prince, born Abel Tesfaye, made sure his performance would be one to remember as he invested $7 million of his own money into the show.

Wearing a sparkly red blazer, with black slacks and wingtip shoes, Tesfaye was backed at first by a large choir clad in white robes and lit-up face masks. The choir's stands looked like a lit-up cityscape and appeared at the top of the Tampa, Florida, stadium.

The Weeknd kicked off the performance with "Starboy," before segueing into his single "The Hills." For his hit track "Can't Feel My Face," he entered a gold maze under the stands, before being bombarded by dancers in matching red and black outfits with face bandages.

Later in the performance, the matching dancers took the field for a uniform choreographed routine. Soon, Tesfaye joined them, standing on the NFL logo at centerfield to perform his chart-topping hit "Blinding Lights" to conclude the fun performance that had the crowd cheering and singing along. Fireworks and unique projections helped the singer give fans a show-stopping spectacle. Ahead of the performance, Tesfaye, 30, spoke to reporters at a press conference where he revealed that his team had built a stage inside the stadium.

"Due to COVID, and for the safety of the players and the workers, we built a stage within the stadium," he said. "And we're also using the field as well. But we wanted to kind of do something that we've never done before."

"We built the stage in the stadium, but I'm not gonna tell you anything else, because you'd have to watch on Sunday," he teased.

Tesfaye's team prepared for the show for six months, planning over "Zoom calls and email chains" to put together this intricate performance, according to Billboard. La Mar C. Taylor, XO's creative director, called the experience a "Rubik's cube of problems" that needed to be solved. "We've been really focusing on dialing in on the fans at home and making performances a cinematic experience, and we want to do that with the Super Bowl," Tesfaye told Billboard.

During Thursday's press conference, the singer also said he wants to be "respectful" to viewers at home while still continuing the storyline of the red suit-wearing character he created for his After Hours era. (Some of the past videos have featured blood, guns and some gore.)

"I will still incorporate some of the storyline. It's a very cohesive story I've been telling throughout this era, and throughout this year, so the story will continue, but definitely, we'll keep it PG for the families," he said.

Last year, Shakira and Jennifer Lopez became the first Latina headliners at the halftime show. Meanwhile, Maroon 5 headlined in 2019, Justin Timberlake in 2018 and Lady Gaga the year before that.

Tesfaye was first announced to be the halftime headliner back in November 2020. He was later featured in Pepsi's 2021 Super Bowl LV commercial where people of all backgrounds sang his hit song "Blinding Lights." Ahead of his iconic performance, the singer donated 150 free meals to healthcare workers in the city of Tampa Bay in honor of Black History Month. The singer paired up with Postmates and Mama's Southern Soul Food, a Black-owned restaurant, to get meals to the frontline workers at Advent Health in the city.

"It's the first day of #BlackHistoryMonth and we're kicking it off with @theweeknd and a surprise in Tampa Bay," the official Twitter account for Postmates wrote on Monday.

The Tampa Bay Buccaneers and the Kansas City Chiefs are facing off at Super Bowl LV on Sunday in Tampa. The game is airing on CBS.

Due to the airborne transmission of COVID-19 and case spikes across the country, the CDC continually advises against gatherings of large groups and recommends six feet of distance and face coverings at all times.