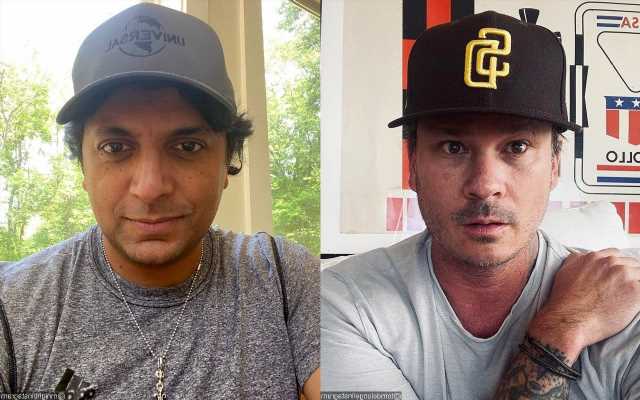 The former Blink-182 guitarist recalls his encounter with the ‘Old’ director when reuniting with ex-bandmate Mark Hoppus on Apple Music 1 show ‘After School Radio.

The former Blink-182 star and ex-bandmate Mark Hoppus reunited on Hoppus’ Apple Music 1 show “After School Radio” on Tuesday, August 3, and discussed old times – and during the chat DeLonge recalled the time he approached “Old” director Shyamalan at a restaurant in Japan and asked if he wanted to direct the band’s next video.

“Within half an hour, we’re all sitting together and he’s coming up with ideas for a Blink video,” Mark said. “And I mean, he did come up with a whole treatment and everything. It was going to cost… $20 million, but I mean, just on your gumption… no f**ks to give, just walk up to somebody and say, ‘Hey, I want you to direct a Blink video.’ “

“I think when he found out what music video budgets really were, he was like, ‘This is so beneath me,’ ” the 45-year-old rocker continued sharing the story. “No, he didn’t say that, but of course, he was like, ‘I’m not going to do this, this is a nightmare.’ “

Hoppus’ cancer battle appears to have brought the two once-feuding musicians closer together.

DeLonge tweeted in June that his guitarist friend is “strong, and a super-human who is pushing through this difficult obstacle with a wide-open heart” and last week added Hoppus was “doing well” following chemotherapy.

They co-founded the “All the Small Things” band in 1992. DeLonge left in 2015, with Mark and drummer Travis Barker blasting him at the time for being “ungrateful.”