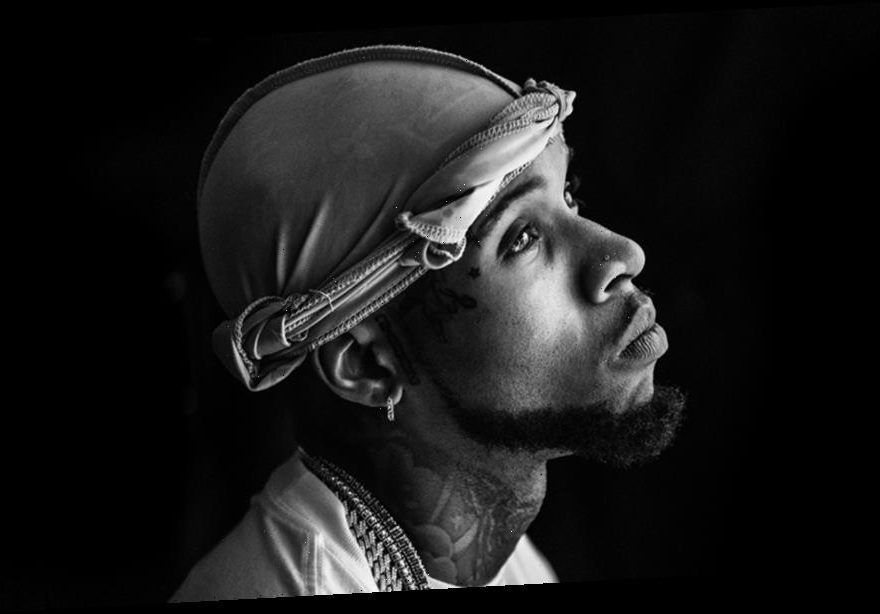 Rapper Tory Lanez, who Megan Thee Stallion has accused of shooting her in the foot in an unexplained incident in July, dropped a 17-track album Thursday night in which nearly every song addresses the incident and its fallout, and what Lanez apparently perceives as betrayal from nearly all quarters.

The new album, “Daystar,” may forever remain most famous for asking the musical question: “How the f— you get shot in your foot, don’t hit no bones or tendons?”

The album drop was either much more or much less than what his fans and detractors had been led to expect. On Thursday afternoon, Lanez tweeted: “To my fans … I’m sorry for my silence …. but respectfully .. I got time today …… 9 PM PST.” A majority of onlooker expected him to give his side of the alleged shooting on social media, which is the method Megan has used to gradually reveal a series of alleged details about the incident, in which she claims Lanez shot at her as she was leaving a car after an argument, hitting her in the foot.

But the fact that he picked the exact time at which nearly all albums are digitally released each week was a tip-off that he had other intentions. What the world got instead of an explanatory tweet or Instagram post was an hour-plus long album — which, despite his claim of it being on “all platforms,” was only initially posted on SoundCloud. It contain song after song packed with deeply defensive lyrics, with frequent verbal jabs at Megan, his critics, people making fun of him about his height (which was reported as 5’3”, but he wants the world to know is several inches more than that), singer JoJo (who deleted a duet with Lanez from the deluxe version of her album), “friends turning into enemies” and the like.

The web was flooded with heated commentary within moments of listeners making their way into the opening track, “Money Over Fallouts,” in which Lanez says: “ Gotta see a couple questions / How the f— you get shot in your foot, don’t hit no bones or tendons?  / How the f— your team is trying to pay me in some whole millions? /  I just lost like 10 million dollars because this cold business  / But I got like 10 million followers that’s gon’ roll with me /  Fans that support me because they know my heart.”

Representatives from Spotify, Apple Music and Tidal — none of which had posted the album at the time of this article’s publication — did not immediately respond to Variety‘s requests for comment about why they were not hosting the album, but it’s possible their legal departments could be vetting the lyrics for libelous content.

Although he doesn’t try to offer any detailed account of how his ex received her foot wounds, Lanez does go into detail about the tension that arose between them earlier that night: “Me and Kylie (Jenner) still off in the pool / We was chilling, kicking s—, was cool /Both of us didn’t know you was tripping / Even though I got a crush on Kylie, I woulda left with you if I knew you was dipping, for the simple reason / You invited me, but I can’t act like shawty didn’t excite me.” Then, he offers as much of a mea culpa as he’s about to, saying he “took a wrong turn that night.”

While repeatedly suggesting that Megan has been influenced by others in her life to come up with a false story about a shooting, and denying that he would ever harm a woman, Lanez does apologize, to an extent, for his emotional behavior, saying in “Care for You”: “There’s traumas in my past that make me talk loud and lash at you / Sorry for the times my attitude mixed with the status too.”

The backstory behind the album and Lanez’ heated self-defense: In the early hours of July 12, Lanez was arrested in Hollywood for possessing a concealed weapon; Megan (real name: Megan Pete) and two other people were in the vehicle with him at the time of the arrest, although the shooting took place beforehand.

Lanez, 28, a Canadian citizen whose real name is Daystar Peterson, has kept a low profile since his arrest.

While the incident was reported in the press just hours after it took place, details have been slow to unfold. Most of them have been provided by Megan herself, culminating in her accusing Lanez of being the gunman after weeks of increasingly damning hints.

“Yes, this n—a Tory shot me,” she said in a fiery video posted to Instagram on Aug. 20. “You shot me, and you got your publicist and your people to [talk to] these blogs, lying and s––. Stop lying!” Various individuals claimed on social media that Megan had physically abused Lanez or faked the shooting.

Later in the session, she says that she did not tell law-enforcement officers that Lanez was the shooter because of recent police violence.

“I didn’t tell the police nothing because I didn’t want us to get in no more trouble,” she says.

Megan, Lanez, his bodyguard, and an unidentified woman who is speculated to be Megan’s close friend Kelsey Nicole had attended a party at Kylie Jenner’s Hollywood home earlier in the evening. The four were pulled over by police after a report of gunfire outside a second residence; a witness described the car they were traveling in. While initial reports said Megan had cut her feet on broken glass inside the car, she later claimed to be the “victim of a shooting,” but without identifying the gunman, who was widely suspected to be Lanez.

Megan, 25, then posted photos of her injured foot on Instagram but deleted them a few hours later. More posts discussing the incident ensued; then on Aug. 20 she tweeted, “Lie one more time and ima quit sparing you” — her claim that Lanez was the shooter followed shortly afterward.

Surveillance footage of the arrest shows Lanez, the unidentified woman, and later Megan lying spread-eagled on the ground near the vehicle, surrounded by multiple police cars with a helicopter hovering overhead.

Lanez was released a few hours after his arrest on a $35,000 bond, according to the L.A. County Sheriff’s Department. He is due in court on Oct. 13.

A representative for the LAPD told Variety that there has been no update in the investigation into the incident, which began in July based on Megan’s initial claims in her Instagram post. “On July 24, our office asked law enforcement for further investigation before making a filing decision on a charge of felony assault with a semiautomatic firearm – personal use of a firearm,” against [Lanez],” reads a statement from the district attorney’s office.

In a cover interview with Variety nine days after the shooting, Megan declined to discuss details but did say:, “I’m not the type of person who can stay down for a long time. I don’t like to be sad or keep myself in a dark place, because I know it could be the worst thing happening, but the pain and the bad things don’t last for long.” That sentiment is reflected in Wednesday’s comment, “Why are y’all so upset that I don’t wanna be in the bed sad?”

The incident has done nothing to slow her fast-rising career. She and Cardi B released the smash single “WAP” in August, and she is the musical guest on the season premiere of “Saturday Night Live” on Oct. 3.