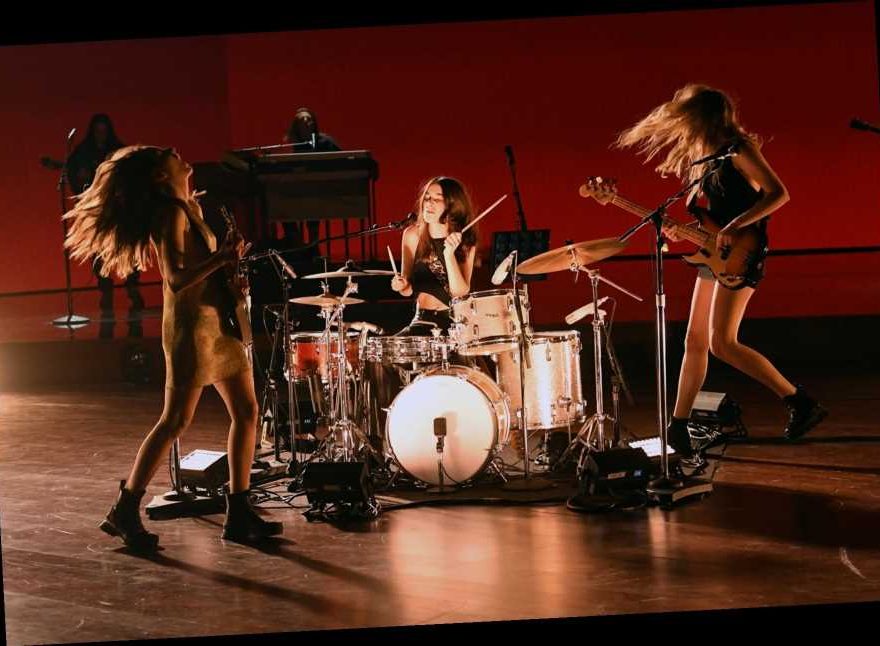 Haim brought the house down with “The Steps” in their first-ever Grammy performance at the 2021 ceremony.

Following the show’s Covid-19 guidelines, the sisters performed in the round without an audience, surrounded only by the other acts — Harry Styles, Billie Eilish, Black Pumas — along with host Trevor Noah and Grammys producers and stage crew. Despite the unusual set-up, Haim rocked out to the Women in Music Pt. III track in front of a striking red background.

Haim scored two nominations at the Grammys this year, including for Album of the Year (Women in Music Pt. III), making them the first all-female rock band to hold the distinction. WIMPIII track “The Steps” is also nominated for Best Rock Performance. Last month, the sisters released a deluxe edition of the album with two remixes: “Gasoline” with fellow Album of the Year nominee Taylor Swift and “3 AM” with Thundercat.

The sisters recently spoke to Rolling Stone about their lifelong love for Joni Mitchell as part of the Icons & Influences package in this year’s annual Women Shaping the Future issue.

“[Miles of Aisles] was pretty much the only CD that was in our mom’s car — I don’t think she knew how to change the CD, so every time she turned on the car, that’s what would play,” Alana Haim said. “And because I was so young, and because my mom knew all the songs and would sing every word, I thought my mom was Joni Mitchell at one point. She knew every single run and every single melody on that record. It was the most inspiring thing.”